Why were supreme sacrifices of soldiers of “Azad Hind Fauz” led by Subhash Chandra Bose buried? To promote facade of non violence led freedom by Congress in 1947? 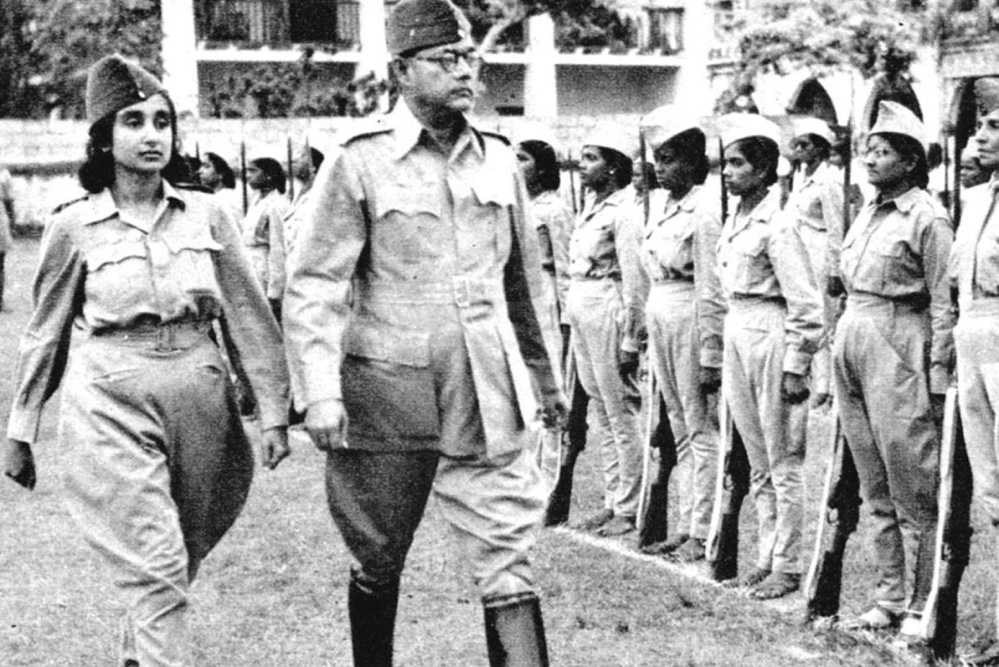 They were freedom fighters of Indian National Army (INA) or Azad Hind Fauz, who gave their blood, toil, tears and sweat, under the leadership of Netaji Subhash Chandra Bose, to liberate their country from British subjugation. They were India’s own sons and daughters, who had marched more than 3500 kilometers from Singapore to the pits and forests of Manipur and Nagaland on 18 March 1944 to free India from British enslavement. Extreme conditions of battleground—even if they were ill equipped and poorly supplied—could not dampen their fervor for freedom. Indian National Army had chosen hunger, thirst, battle agonizing pain and death so that India could be free.

Was a free India in 1947 a grateful nation to supreme sacrifices of Azad Hind Fauz? How many monuments were built in the name of Indian National Army? Why did it take more than 70 years after freedom for Prime Minister of India to hoist national flag at the Red Fort in New Delhi on 21 October 2018 to commemorate 75th anniversary of Azad Hind Fauz? Why the four INA veterans, Parmanand (99), Laltiram (98), Hira Singh (97), Bhaagmal (95), all from Haryana—who had fought under Netaji Subhash Chandra Bose leadership—were honoured in open jeeps in at Republic Day parade in 2019 after more than 70 years of independence?

What can be bigger humiliation for a soldier—who made supreme sacrifice for his country—than his sacrifices are buried to be faded into neglect and oblivion? Retired Major General Gagandeep Bakshi’s pain for INA spilled into his eyes, when he expressed his outburst about successive government’s apathy towards INA after India’s independence during an interview with Trunicle. He said, “You know 26,000 out of 60,000 INA died fighting, which is 44% of the forces. Almost half of the forces died fighting for freedom, yet we have audacity to chant, DE DI HAME AZADI BINA KHADAG BINA DHAAL. For God sake, do we have sense of self respect? What about the families of 26,000 martyrs? How would they feel, when you bury their sacrifices? Imagine, every useless fellow, who was beaten by LATHI, goes around saying, I am freedom fighter, I must be rewarded.”

The Indian National Army was founded by Prisoners of Wars of British Indian Army, who were captured by Japanese in Singapore, Malaysia and other South East Asian countries during the World War II after fall of Singapore on 15 February 1942. Britain’s wartime Prime Minister Winston Churchil described fall of Singapore as “the worst disaster and the greatest capitulation in British history.” Japan had captured 70,000 Indian war of prisoners. A disillusioned British-Indian Army Officer, Captain Mohan Singh—who had been captured after British surrendered at Singapore in February 1942—recruited Indian soldiers of British Army from Japanese Prisoner of War camps with a goal to fight British in India. However, due to differences between Mohan Singh and Japanese military INA was disbanded in December 1942.

People of Indian origin had formed various local leagues, which were united as one banner, Indian Independence League (IIL) under the leadership of Subhash Chandra Bose, who had escaped from India in 1941 to Germany to work for India’s independence, came to Singapore in 1943. He took charge of INA and turned it into an effective instrument for freedom of India. On 21 October 1943 Netaji Subhash Chandra Bose had established the first government of free India in Singapore. The government was internationally recognized by various countries. It had its own bank, its own embassies, its own currency and its own army. Bose was Prime Minister and the Minister for war, while Captain Laxmi was head of the women’s organization. They also had an all women regiment “Rani of Jhansi Regiment.”

Indian National Army marched to Arakan in Burma (Myanmar) in January-February 1944, then reached Indian soil on 18 March 1944 moving into trenches and jungles of Kohima and Imphal covering distance of more 3500 kilometers for the “March to Delhi.” INA fought with British Indian Army along with their “Rani of Jhansi Regiment.” But, extreme condition, inadequate supply, hunger diseases forced them to retreat. INA soldiers were captured by British.

In November 1945 trials of INA soldiers was publicly held, which caused naval mutiny. On 18 February 1946 around 10,000-20,000 Indian sailors of Royal Indian Navy (RIN) declared a hunger strike infuriated by the trials of INA soldiers. Their agitation soon turned into a firm demand of freedom from British Rule. In a Facebook post Major Gen GD Bakshi writes “British was not even least bothered by the Non-violent movement of the Congress. Quit India movement in 1942 had been decisively crushed with ease. The INA trials and Naval mutiny generated such serious alarm that Commander in Chief Fd Mshl Auchinleck was forced to plan for evacuation of British nationals and soldiers. It took British 18 months to get out of India.

In 1972, after 25 years India achieved its freedom, government of India announced Freedom Fighter Pension Scheme and implemented it in 1980 as a token of respect for their contribution in freedom movement. Forget about granting Freedom Fighter pension to INA veterans, they were not even granted Freedom Fighter status unlike those in Gandhian movement. How can General Gagandeep Bakshi be so right? Those who were beaten by LATHI (stick) were declared freedom fighters. Those who died for nation were denied even status of freedom fighters.