Why is there no Muslim mass leader in India? Isn’t Islamist mentality of Muslims responsible for it? 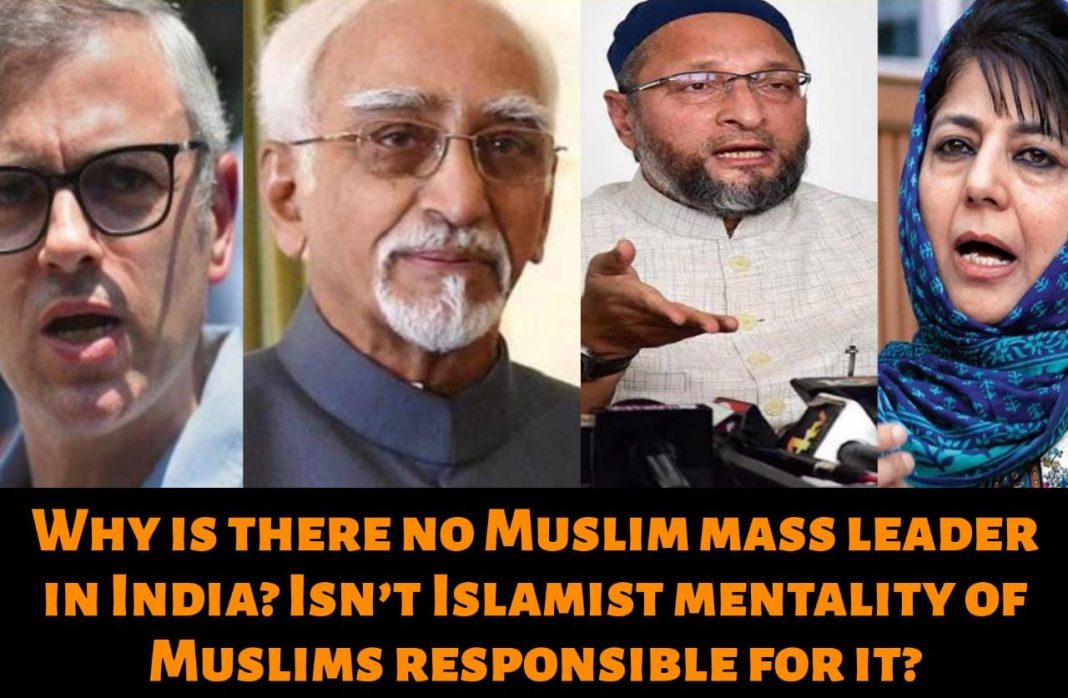 In an interview with News anchor Aman Chopra, aired on Zee News on 30 January, Mohammad Hamid Ansari didn’t hesitate to play victim card “Muslims are not safe in India” quite expectedly. This is not the first time Vice President for 10 years, Head of Minorities Commission, and ex Diplomat Mohammad Hamid Ansari tried to play “Muslims are insecure” in India, but he had reiterated the same stance on the last day of his tenure in 2017.

During 2014 Lok Sabha Election campaign Narendra Modi, then Gujarat Chief Minister raised the slogan SABKA SAATH SABKA VIKAS, which means development for everyone with everyone by everyone. After landslide victory, Narendra Modi asserted in parliament on 17 May 2014, “this government is for everyone, those who voted for it, those who didn’t vote for it. No one is favourite, no one is alien.” He even assured, “I want to tell people of India that his government would carry along everyone how much they oppose us.”

All India Majlis-e-Ittehadul Muslimeen (AIMIM) not only claim to speak for Muslims only, but its leader dream to Islamize India by wiping out Hindu population.

On 22 December 2012, Akbaruddin Owaisi, brother of Asaduddin Owaisi said that 25 crore Muslims would need just 15 minutes to finish off 100 crores Hindus. Withdraw the police for 15 minutes and see who is more powerful. The crowd went into raptures. He further went on threatening, “If Muslims of India united like the Muslims of Andhra Pradesh, Narendra Modi would soon be hanged. And India would witness a bloodshed, which was not seen in the last 1000 years.” Such statements are tip of iceberg of Akbaruddin Owaisi’s hatred for Hindus and India.

Mr Asaduddin Owaisi too, echoed divisive politics like his brother, when he said he would not say “Bharat Mata Ki Jai, even if a knife was put to his throat in March 2016. After Article 370 was revoked, Asaduddin Owaisi complained that scrapping of Article 370 is attack on federalism.

Azam Khan, Samajwadi Party leader shed crocodile tears saying, “We are paying the price for staying in India after partition on 18 July 2019, when district authorities listed him as land mafia in the anti-land mafia portal introduced by Yogi Adityanath government for allegedly forcibly taking land from farmers to construct the Mohammed Ali Jauhar University.

Abu Azmi, Samajwadi Party leader from Maharashtra, was allegedly said to have helped Indian Mujahideen member Shahzad, an accused in the 2008 Delhi Blast case and the Batla House encounter. One can see the Islamist side of Abu Azmi, when he said in an interview with Mid d-Day, “Rape is punishable by hanging in Islam. But, here nothing happens to women, only to men. Even the woman is guilty.”

Imaran Masood, a Congress candidate from Saharnpur, openly threatened, “I would chop Narendra Modi into pieces, if he tries to convert UP into Gujarat” during campaign of 2014  Loksabha Election.

When Muslims became majority in Kashmir under leadership of Farooq Abdullah, Kashmiri Hindus were given three choices—convert to Islam, leave Kashmir or get killed—thereafter, they were slaughtered in Independent India not so long ago but in 1990. Survivors of Kashmiri Hindus are still living in their own country as refugees.

More or less all Muslim leaders endorse same brand of politics, where Muslim identity and their religion are put above than national interest. “What is astonishing is that the same Muslim leaders play victim card of “Muslims are not safe in India.”

Prior to Independence, Muhammad Ali Jinnah used to be popular leader for Muslims. But, Jinnah gifted India a deep wound called partition, which would never heal. Quite expectedly, a Muslim leader, Jinnah put his religious politics above than national interest. Don’t present popular Muslim leaders in India draw inspiration of Jinnah?

When a Muslim rises to be a leader, he maintains the trait of either Aurangzeb, Babur or Muhammad Ali Jinnah, who inflicted India wounds, that can never heal. A Muslim can rise to be a mass leader, only when he knows and comprehend the bloodied history of India and persecution of Hindus. Can a Muslim ever rise to connect with soul of India? Can a Muslim ever rise to know secularism is intact only when Hindus are in majority? Do Muslims of India need to tell Jinnah’s Pakistan is a failed state?

Would India ever witness a Muslim mass leader, who would rise above Muslim identity politics? It is yet to be seen.

Manisha Inamdar
Previous articleBUDGET 2021 – 22 : THE RIGHT ELIXIR FOR A SELF RELIANT INDIA
Next articleOn Line Conferences, Security threat & the need for a Indian organiser.
- Advertisement -