Where is Prophet of Freedom of Expression? 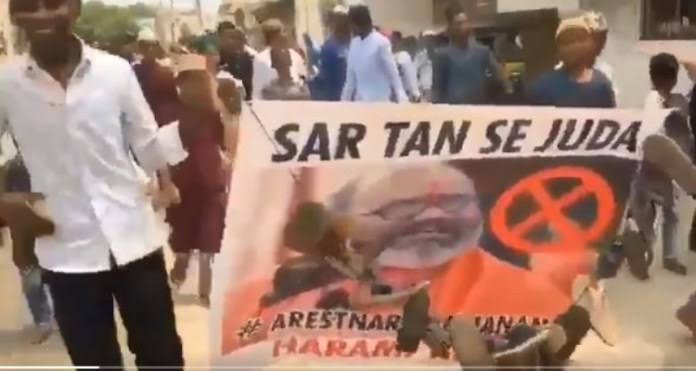 Cow is worshipped by Hindus. Still they slaughter it in the name of freedom of choice of food and secularism.

India is the land of freedom of expression. Freedom is so much and so that you can raise the slogans like “Bharat Tere Tukde Honge Insallah Insallah” you can abuse Indian Armed forces, Indian Prime Minister and what not still you will find millions supporting you.

They don’t worship Prophet Muhammad. Still if someone talks out their own personal views against him may be unpleasant to many ears. Call for beheading starts to rise high in the air. Rallies with posters,banners and slogans like “Sar Tan Se Juda” can be seen in many parts of the country . Things don’t stop here many thekedaars of Islam issues fatwas and offer prize money to behead the accused. Even worse MLA from AAP Amantuallah Khan (who had problem when few young piglets of terrorism were killed in Batla House) , leaders of AIMIM, AIUDF etc radical Islamists encourage this call for beheading on public platforms .

I am not in support of saying anything against any religious figure but if anyone says so he/she shall be trialed under the constitutional methods of Bharat. If Akbaruddin Owaisi even after abusing Maa Sita, Prabhu Ram , Mata Kaushalya and what not is still alive and going through court trials so does Yati Narsinghanand deserves court trial . I may not agree with Yati Narsinghanand on many issues but I will fight for his rights as a citizen of India for rights of freedom of expression.

It’s high time Kamlesh Tiwaris be given fair trials and not the punishments decided by Shariat laws (if they can be called laws or so) . The point must also be noted by the Judiciary and Prime Minister’s office that continuous prodigal treatment of Hindus must stop because I am scared that if we don’t treat them well tortured, robbed, murdered, exploited Hindus may opt for the policy of eye for an eye .