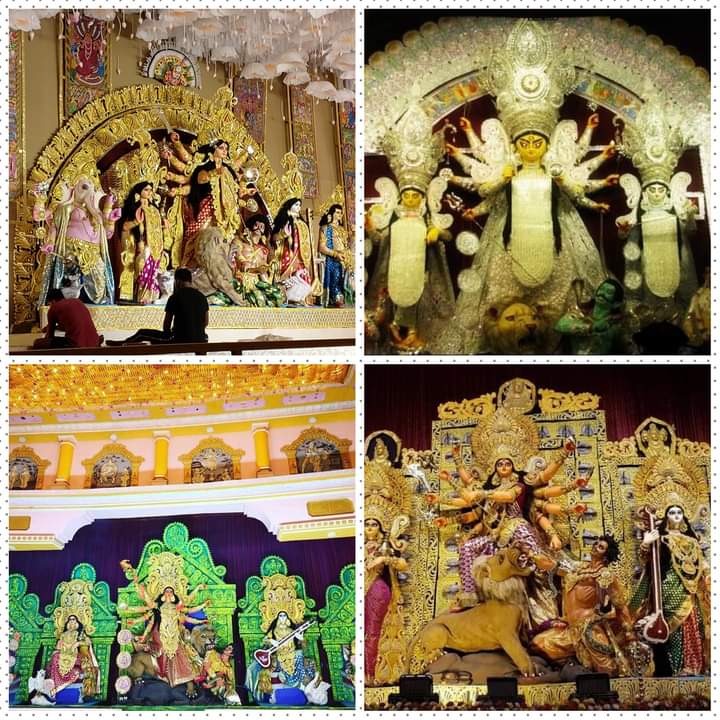 In the early years of Durga Puja, it was an occasion for the Babus of Bengal. Since the time that the concept of Barowari (Baro -yari) Puja came into being in the late 18th century, at the behest of the 12 brahmin friends (Baro yaar) from Guptipara, Hooghly, Durga Puja became a universal (Sarbojonin) event, stepping out from the confines of the zamindar’s (landlord’s) palace. The pomp and gaiety associated with the Puja started taking it’s present shape. The city of Kolkata gets transformed into a dreamland with the glittering lights, the beautiful pandals and happy faces decked in new clothes merrily hopping from one pandal to the other. For the entire Puja month all of one’s stress abd agonies seem to disappear temporarily.

The Pujas signify happiness and homecoming for a vast majority of Bengalis, earning their living outside Bengal- the number is huge, considering the fact that most Bengalis work outside Bengal as there are no jobs here. But for those, who are not able to make it, Maa goes to their doorstep as is evident from a large number of Pujas seen in various parts of India as well as in America, Europe and Australia. The Puja also atrracts considerable interest from the foreigners.

Then came the Sharod Samman Awards – the awards for excellence in Puja organizing, pioneered by Asian Paints in the late 1980s and soon other corporates followed suit.What followed was a cut thtoat competition between the different Puja organizers for these coveted awards which entailed not only fame & recognition which subsequently helped to draw large crowds, but also the associated money component, which helped in organizing subsequent pujas even better. The positive take home of these awards was that it made the organizers take care more about the environment, cleanliness & hygiene in and around the pandals and the aesthetics of the Pujas. One glaring example was the replacement of the loud and garish hindi film songs blaring from the loudspeakers, with the soothing sound of a shehnai or bhajan, kirtan, mahishashurmardini and other devotional songs playing from the Pandal speakers.

Despite all of this, the old and traditional Puja organizers never shed their uniqueness and never compromised witb the traditional Murti of Maa Durga, which we crave to see and feel like praying to. The attached photo shows the images of Maa Durga associated with Mudiali Club (clicked by me yesterday), Baghbazar Sarbojonin, Ekdalia Evergreen and College Square. These Pujas are well known for their traditional Dashaprahanadharini Durga Murti and the Ekchalar Maa Durga wearing Daker Saaj. These Pujas still happen to be the most popular pujas of Kolkata and happen to be amongst the biggest crowd pullers. No amount of pandal hopping is complete if one hasn’t visited these pandals. They stand evidence to the fact that garish themes and unorthodox, often uncouth presentation, rather mis -presentation of Maa Durga is not a pre requisite to gain popularity or to earn awards. If they could manage to retain the original spirit of the Pujas, which the quintessential Bengali identifies him/herself with, why couldn’t the others putting up weaponless puppets or repulsive images of Maa Durga? Can any eminent intellectuals confirm that the latter are more popular worldwide than the former? Then what is the need of such themes to dilute the essence of the Pujas? Is there a vile agenda behind such ‘secularist’, political agenda driven themes? It’s noteworthy, that these theme obsessed Pujas are relatively new, which again causes all the above questions to pop up in one’s mind and the need to trace their antecedents arise.

While this debate of the traditional vs the new will continue, one seriously needs to give a serious thought to these political agenda driven pujas and how it will whitewash the hindu identity from the minds of the Bengalis.