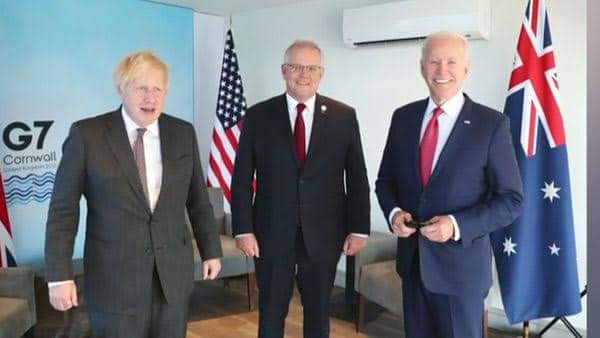 There is a Quad alliance of India-US-Australia-Japan which deals with affairs of Indo-pacific and was made as counterweight to hegemonical aspirations of China to control Indo-Pacific arena and enslave some countries using military and economic might (read blackmail).
All these four countries had stake in keeping this area safe and also providing security to shipping lanes as well as ports in this land to keep economic progress chugging for the world.

What does B!den admin do?
Creates a new grouping called as AUKUS involving three white nations Australia, UK & US to man the lanes of Indo-Pacific. Now UK militarily is a spent force and at best can be considered as Bjialadeva to Ballaldeva if you have watched the Bahubali movies.
Two democratic nations which actually have stake, economic might and firepower in Indian and pacific ocean region, India & Japan are excluded because they aren’t white skin country and current US regime for all its tokenism of Black Lives Matter and other pretentions is extremely racist.

We had seen how they behaved in Afghanistan with their Afghan Allies and also how they were actually jumping orgasmically when Indians were suffering due to Delta Cov!d surge and were actually saying that Brown colored heathen Indians deserve to die.
B!den has been an India hater from day 1. He is a ch!nese stooge and by making AUKUS he is simply giving Ch!na a free pass as UK which is not even able to handle Paxtaani grooming gangs raping their kid girls can’t be expected to police the Indian Ocean lanes. It is not colonial era and no country abused by UK in its past colonial era will trust UK if it’s military is seen in Vicinity. US itself has less baggage in this land except in Vietnam, Afghanistan, Middle East but it has shown in Afghanistan that it simply doesn’t have guts to police nor common sense to understand that attacking Afghanistan for Pakistani fed terr@rism is like treating Diarrhoea by applying M-Seal on the an@l orifice.

Australia is not a nuclear power, nor a military power neither an economic giant. Also it is heavily indebted to China because of tourism, investments in mines, students and myriad of reasons.
Australia benefits because of its geographic locations and having many islands across the Pacific and Indian Ocean but what is the use of a ally country which has to sleep with enemy for economic reasons.
Even Australian ex PMs have condemned this move as saying it has nothing for Australia as it has been forcibly gifted Nuclear powered Submarines inspite of not being a nuclear nation.
Australia was selected because they are white skinned. B!den regime sees them as potential allies because of dermatological reasons and not geostrategic reasons.

US will try to keep QUAD alive also as it would like to keep its eggs in all baskets after it got lot of egg on it’s face during Afghan handling.
Biden is going to strengthen China immensely as Hunter has now become Hunted.
India, Vietnam, Japan, Taiwan and other smaller countries will have to do their own defence shields as US is no more a supercop and now is more like fading Rajesh Khanna who still believes in his stardom and wants to compete with rising Amitabh by hiring a coterie who will sing praises to him every evening over free drinks.
US and UK are those hired friends to cheer the sagging fortunes.
US once it survives Biden and Harris will have to really stretch itself to endear to the aspirations of fellow democratic countries like India and Japan.
Japan is a powerful country and once it realises that US can’t be trusted, it will build its military in a jiffy to become worlds top 5 military power. India is already world’s fourth most powerful military nation. These two countries can defend themselves as well as their interests.
Vietnam comes with history of surviving 1000 years of occupation by Han China and keeping its culture intact. Plus it humbled US so it will not be worried as they are a proud country who know how to fight to the nail..
It’s smaller countries like Taiwan, Myanmar, Philippines, South Korea, Singapore which might have to worry in a more Sinotised world where China will control Malacca straights as well as South China Sea.
US will have to survive three more years of bumbling B!den and then it will have to do a resurrection job.
It’s time Brown, Black and yellow man realises that White skin is considered as a privilege by white supremacists and white racism is alive and thriving. It just comes with newer names like AUKUS.