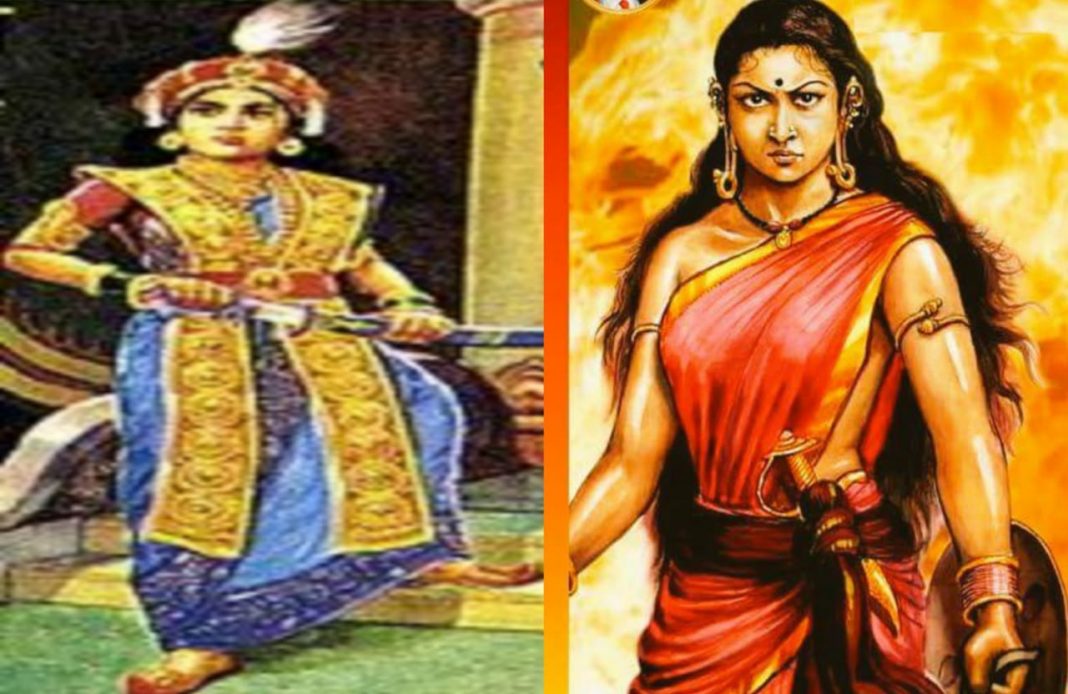 The little known saga of the women duo , Velu Nachiyar and her Dalit commander in chief – Kuyili, who not only knocked down the colonial rule 85 yrs prior to the Revolt of 1857 but also were the first to implement the suicide bombing strategy to save their Kingdom from the invaders.

Velu Nachiyar was married to the second King of sivaganga, Muthu vaduganatha Thevar . It was in 1722 when the king embroiled the war against the Nawab of Arcot and with the direct involvement of the British , he was defeated and martyed.Been devastated with the sudden martyrdom of the king ,the queen Velu nachiyar with her infant daughter fled to Dindigul with the help of Maradu brothers who were the loyals at the kingdom. She was now determined to take the revenge of her husband murderers and protect her Kingdom from those invaders , instead of surrendering to those invaders. She bulit up a special army, the first-ever women army with the support of the Mysore king , although the support was only to gain strategic benefit. This women were well trained and known for their bravery and patriotism.
Kuyili who belonged to a lower caste background had already earned a place in the queen’s heart for protecting queen on many occasions by risking her own life. She was even badly wounded at times. Kuyili father, too , had worked for the queen as a spy in her Kingdom . It is said that Kuyili killed her own Silambam teacher on discovering that he was working as a spy against the queen This made both velu and kuyili closer and trustworthy. All this made kuyili the commander in chief of the queen’s army.

It was after 8 years when she decided to attack the nawab and British troops.Kuyili knew that the in spite of their high preparedness , won’t be able to sustain longer as the weapons used by them were inferior to the weapons used by Britishers.Hence she gathered the information and also traced the location of the place where the British arms and ammunition were stored . She found out that it was stored in a temple where only women’s were allowed to enter.Interestingly , it was the day of Vijayadashami when women’s from far off places come to visit rajarajeshwari amam temple.
Grabbing this opportunity kuyili and troop infiltrated into the temple escaping from the eyes of the British watch dogs. They carried the hidden weapons inside the flower and the fruit baskets . They also carried lamps filled with oil . The chaos began in the temple when the kuyili was drazed with oil and she directly walked into the armoury chamber. She set herself on fire and within few seconds she was crushed into much finer pieces destroying the entire enemy power. It is said that this is the first ever suicide bombing concept introduced by the great warrior kuyili.
This sacrifice helped velu to win over both the nawab and British troops . She ruled the kingdom for over a decade and then died in 1796.Although velu nachiyar is still remembered as veeramangai , brave women kuyili somehow faded from the memories of the public.
We have never found such great and inspiring stories of the Indian women in our history books . It never described the shameful defeat of the Nawab and the British by the two brave Indian woman warrior during the eighteenth century .The education minister of free India may had left out this heroic Saga unsung so as to not embarrass their ancestors , Islamic invaders. These vigilant Tamailian warriors did not find place in our history books despite of the excellent war tactics and historic win over the colonial power.
We took the opportunity to enlighten this story so as to show that women are great warrior too , that too from 18th century. This is a story of infinite patriotism , self determination , loyalty and discipline.