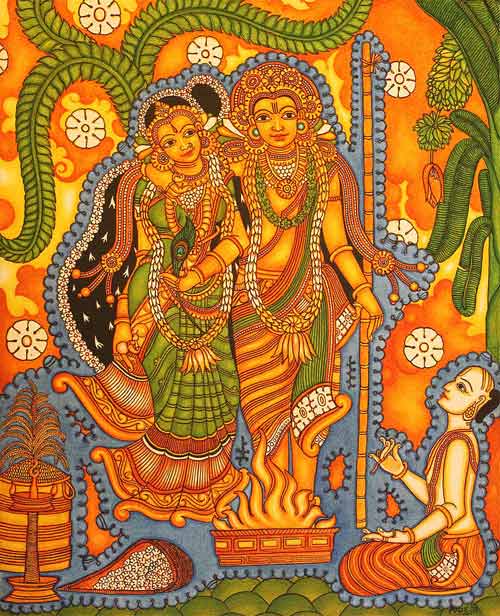 Manyavar’s recent ad featuring Alia Bhatt demeans the Hindu marriage ritual of Kanyadan by claiming it objectifies women. In reality, no other marriage ceremony in the world honors & reveres the bride as completely as the Hindu Vivah (marriage) ceremony.

Apparently Manyavar never bothered to research the tradition of Kanyadan before labelling it regressive. Hindu literature is full of references showing that rituals in the Vivah Samskara are designed to empower both bride & groom as equal partners in a life of spiritual growth.

Undoubtedly, patriarchal distortions crept into Hindu marriages, due to the dark age of Islamic rule when women were raped, molested & killed relentlessly. Social evils like child marriage & dowry arose due to the desperation of Hindus to marry their daughters & protect them.

Authoritative Hindu texts however specifically forbid treating the bride as a material object to be exchanged. The Manu Smriti clearly warns that anyone selling their daughter for any price & treating her like property is assured a place in Hell.

None of these later patriarchal distortions in the Vivah rituals were sanctioned by original Hindu sacred texts. The Hindu Vivah has always based its essential rituals on the famous cosmic marriage described in the most ancient Rig Veda (Mandala 10, Sukta 85)

The Rig Vedic verses describe the cosmic union of the Sun with the Moon. Surya Savitri is the sun bride & Soma, the moon groom. The Vivah honors this celestial marriage by reciting the same Rig Vedic Mantras as a reminder of the sanctity & cosmic significance of Vivah.

Surya & Soma are the prototype for all Hindu couples as human marriages follow the pattern of the celestial union. The bride & groom re-enact it to unify & elevate their lives & walk together on the path to Moksha, as Hindus believe humanity is a refection of divine life.

The Nirukta provides the etymological basis of Vedic terms. It defines Kanya as derived from the root “Kan” which means to illuminate. So the bride/Kanya symbolizes the illumined sun who fulfills creation & the groom symbolizes the moon who receives & reflects her light.

This deliberate usage of the word “Kanya” reveals the real intent of Kanyadaan. If it was about giving away a daughter, Putri or Duhita would suffice. The specific usage of Kanya emphasizes the Rig Vedic view of the bride as the illuminating sun, Surya Savitri.

Vedic rituals were later elaborated in many Grihya Sutras such as Apastambha, Bharadwaja, Baudhayana, etc. to understand the ceremony, rituals & local customs according to Gotra. These rites demonstrate how the Hindu bride is revered & respected in every part of the Vivah.

From the initial betrothal ceremony (Kanyavarana) itself, tradition requires the groom to appear in his best clothes to ask for the guardian’s consent to the marriage. Once consent is given, he must first worship the bride & pray to her for good luck, health & children.
Next the Madhuparka ceremony takes place to exchange auspicious gifts between families & ends with the father-in-law worshipping the bride. The bride is presented with the best garments & jewelry by the groom’s family & blessed with Mantras for health, prosperity & vitality.

The bride’s guardians perform Kanyadana to bestow the luminous Surya (the sun bride) to be received by Soma (the moon groom). Ignorant people understood this to mean donation (dana) of an object, when it actually refers to receiving her energy as Kanya-adana

During the Kanyadana, the guardians recite Mantras bestowing the bride as Lakshmi who unites with the groom representing Vishnu. This is a symbolic transformation of the cosmic Surya & Soma manifested in earthly forms to mimic the ideal divine pair Lakshmi & Vishnu.
Kanyadana thus treats the bride as a divine energy. It shows both mana (respect) & parigraha (reverence) for the bride, so for Manyavar to coin a new term “Kanyamana” is ridiculous. It indicates they know nothing about Hindu marriage & even less about Sanskrit language.

After Kanyadana the groom asks the guardian, “Who gives this bride to me?” And the answer is “Kama” (The god of love). This clearly shows that the Kanya was not given away as an object but symbolically bestowed by the God of love, when she is ready to share her life energy.
It is only after this that the Pani Grahana (holding hands) shown in the ad follows. The groom clasps the bride’s hand to receive prosperity & divine energy. In the Ramayana, Janaka tells Rama that he is accepting prosperity by grasping Sita’s hand during this ceremony.

After essential ceremonies such as Agniparanayana, Lajahoma, Asmarohana, Saptapadi are all performed, the couple is blessed by everyone. Then the couple does Suryadikshana (homage to the sun) if it is during day or Arundhati darshanam at night.

Viewing Arundhati-Vasishta (Alcor-Mizar) indicates Hinduism’s profound knowledge. Most binary star systems have one star stationary as the other rotates around it, but here both stars rotate around each other. Neither dominates, both support & travel, in an ideal partnership.

Post wedding during the Grihya Pravesh the bride is worshipped as Lakshmi. She tips over a pot of rice at the threshold to symbolize prosperity entering her new home. With feet dipped in red lac, she walks through the home to leave auspicious footprints & bless her new family.

Dressed in the best garments & jewellery she worships the family deities & temples. In her role as Lakshmi, she also gives charity to Brahmanas & poor people, on behalf of her new family. The Ramayana recounts how Sita & her sisters performed these rituals on reaching Ayodhya.

To Hindus, Vivaha is not a contract unlike Islam or Christianity, It is a sacred process to endow the couple with abilities to refine their moral & spiritual traits as householders (Grihastha). It transforms lower desires into higher spiritual goals to attain Moksha together.

An analysis of the rituals practiced in a traditional Hindu Vivah demonstrate that the bride is not just respected but worshipped as sacred illumined energy throughout the entire ceremony. No other tradition comes close to giving women such prominence & reverence.

Can Manyavar refute that Hindu texts prove Kanyadana & other rituals of Vivaha ceremony are not patriarchal but instead show immense reverence & Mana for the bride? If not, they must apologize & withdraw this highly offensive ad & stop demeaning & demonizing Hindu customs.

Sources:
Hindu Samskaras: A socio religious study of the Hindu sacraments by Raj Bali Pandey
A Socio-Political study of the Valmiki Ramayana by Ramashraya Sharma
The Hindu Sacrament of Marriage by Pandit Sri Rama Ramanuja Achari.