Trunicle Sanvaad: You are born Hindu when, you are conscious with nature , says Maria Wirth, who lost faith in Christianity but found answer in “Sanatan Dharma” 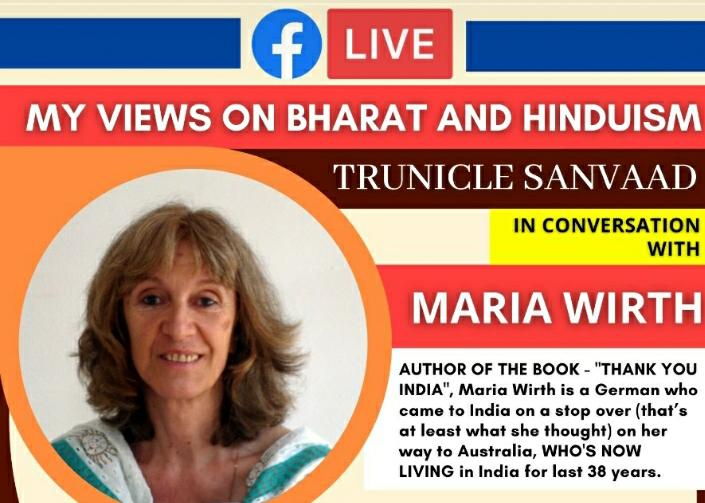 “Hindu children are blessed that they are not intimidated by their parents—if you don’t go to temple on Sunday or any day, you would go to hell unlike German kids, who are frightened—if you don’t attend mass on Sundays, you would burn into hell” says Maria Wirth, author of Thank You India: A German Woman’s Journey to the Wisdom of Yoga

Maria Wirth, woman of German origin, who has lived in India for about 38 years speaks to Trunicle about her journey from being a seeker to receiving spiritual wisdom in India. India didn’t attract her,  when she visited for the first time, but when she visited second time, fortunately, she came across a book by Swami Vivekananda, which gave her answer of what her soul was seeking.

Maria Wirth had lost faith in Christianity, when she was a teenager in high school in Germany, but didn’t lose trust in God as she knew that there must be some great power. Vivekananda’s book satiated her restless soul.

Child Maria Wirth had been bombarded with too much Christianity, which she did believe in her childhood. However, she couldn’t bring herself to believe that our great God would send people to hell to burn. She says this is one point which makes many Christians to abandon Christianity. When she was seeking truth, she realised it is energy as mentioned in physics, is God if He exists. Islam and Christianity say they have one true God, while Hinduism talks about absolute oneness, where Christianity doesn’t go this level.

“You can not become a Muslim or a Christian if you live on a little island, which has no contact with world. Someone has to tell you about Jesus or Allah as only truth. But, you are born Hindu, when you are conscious with nature.
Says @mariawirth1
Speaking on #TrunicleSanvaad https://t.co/dC13Wcs3xT

Why does Maria Wirth think that Hinduism is true and divine revaluation?

“You can not become a Muslim or a Christian if you live on a little island, which has no contact with world. Someone has to tell you about Jesus or Allah as only truth. But, you are born Hindu, when you are conscious with nature. Consciousness is miracle. Depth of consciousness experienced in Hinduism is unique, as Hinduism or Sanatan Dharma can not be put in the same basket with Islam and Christianity, explains Maria.

Who am I? I want to know the truth. When Maria Wirth questioned this, Christianity answered her, if you believe this, you would go to heaven afterwards, but you have to believe this. Maria Wirth felt liberated, when she saw Hindu children are not injected fears in their minds that if they don’t go to temple on Sunday, they would go to hell. In Hinduism, God doesn’t mean fear and threat. God means we become one with.

Maria Wirth says temples in India are much older than they are told.

“Marvel and science of Kailash temple is unparalleled. How can a mountain from top to bottom be scooped to build a huge temple? They want Hindus to forget their glorious history. Therefore, If temples in India are told they are much older, Islam and Christianity get threatened. People would wonder why Son Of God and Messenger Of God came so late?, describes Maria.

Indians are made to believe that their history and heritage are not so old. Hence, Indians must stand for their age old glorious history.

“Indians are looking towards West, while West doesn’t want India to come up. They borrow original knowledge from India and project them as European. Google would would tell about Mesopotamia, Egypt or Greece but not about India as source of knowledge,” Maria vents out her frustration.

“India has 40 million text. Only 5% has been translated. Imagine the amount of text has been burnt in Nalanda University. Can the amount of knowledge and wisdom lost in Nalanda University be calculated? A lot of knowledge were destroyed in India, but treasure is still here, Maria shares her disappointment. But, she lights up with positive energy when she hopes Sanskrit to revive in a big way, as it is easier to learn Sanskrit than English. Germany has so many Sanskrit institutes as there are so many manuscripts there.

What the world is discovering now has already been discovered in ancient India.

Western science is based on Indian knowledge. American Association for the Advancement of Science made a list of 100 most important inventions over all the times. India was mentioned only twice for mapping the sky and zero. How can primitive people, some 20,000 years ago, discovers planets and constellations just by looking in the sky? Isn’t it incredible? Wonders Maria.

“If truth is told about glorious history of ancient India, Christianity and Islam would lose their followers and foundation. It is unfair that inventions of ancient India is not even acknowledged,” Maria shares her disappointment.

A German lady is more enlightened about spirituality of Sanatan Dharma than an average Hindu is enlightening message for all.