The way Bhindranwale dishonoured the Sikh faith by turning Golden Temple into his hide out, stockpiling weapons inside it, his followers desecrated National Flag in front of 1.3 billion Indians 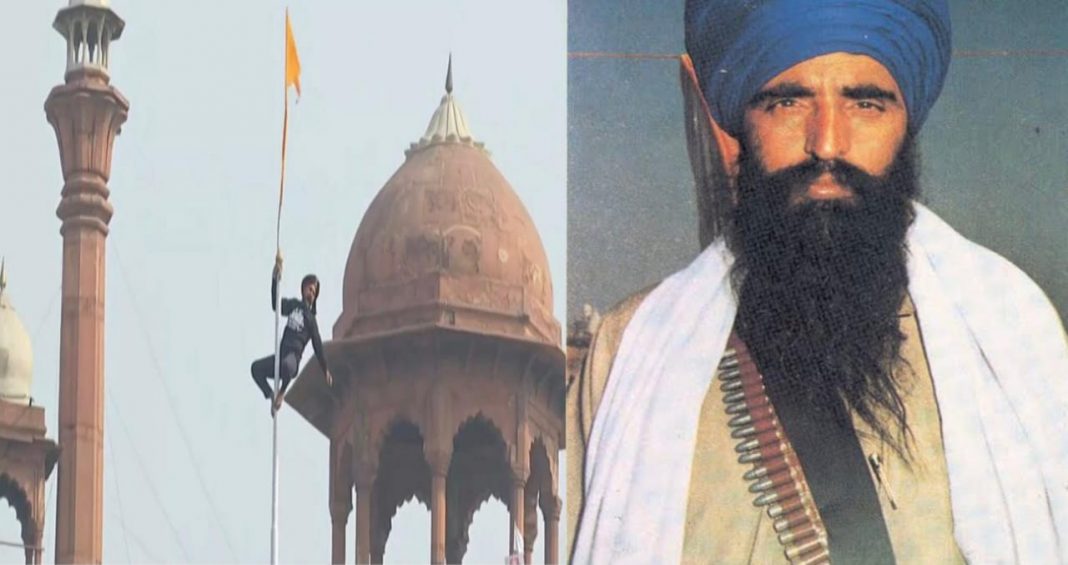 National Flag was insulted in front of 1.3 billion Indians on Republic Day. Now, Indians are doing soul searching what forced late Prime Minister, Mrs. Indira Gandhi to order to launch “Operation Blue Star” on 5 June 1984? Why was the “Operation Blue Star” the last option to neutralize the dreaded terrorist Jarnail Singh Bhindranwale and his gang, who had committed bloodbath in Punjab during Khalistan movement?

Aren’t the Bhinderanwale followers the same goons, who held the ‘Delhi city to ransom on Republic Day on 26 January 2021? Sikh For Justice (SFJ), a pro Khalistani, outfit had announced a reward of USD 2.5 lakh on 11 January 2021 from New York, for those, who would hoist a Khalistani flag at the India Gate on Republic Day. And Delhi witnessed the mayhem and anarchy exactly what the banned terror outfit, SFJ had conspired. Sanctity of National Flag was violated by throwing it down in front of 1.3 billion Indians on Republic Day. It was an attack on 1.3 billion Indians’ national pride.

If Khalistani supporters can desecrate National Flag in front of 1.3 billion Indians, can commit violence, anarchy, destruction public properties, can attack policemen, what would they have done to Golden Temple?

Bhinderanwale, who had taken up arms against India’s sovereignty, was a cold blooded murderer. He had desecrated the Golden Temple in the vilest way. No Sikh had ever violated the sanctity of Golden Temple the way Bhinderanwale had turned it into a center of relentless campaign of hate and crime. He had tarnished Golden Temple by spilling blood in its sacred confines and turned the Akal Takht and Gurudwara into a place of torture and murder almost on daily basis.

In the past, Sikhs had laid down their lives to defend Golden Temple from Ahmad Shah Abdali, who had razed it to the ground and filled up the sacred Sarovar with blood and limbs of animals in 1762. Despite the history of Sikh warfare, no Sikh ever seized Golden Temple to make it a hideout of armed militants. In 1846, a group of Nihangs had occupied the Brujis (towers) after some dispute over the administration of the temple. But the Nihangs immediately left the Temple announcing that they would not spill blood on the holy ground, after Maharaja Dalip Singh sent his army to expel them.

Jarnail Singh Bhinderanwale and his heavily armed militants followed no rules, felt no hesitation and no morality to desecrate Golden Temple. Any Sikh, who criticized Bhinderanwale, was a target of his lethal violence. Such dissidents were murdered in cold blood.

When Babbar Khalsa, the rival terrorist outfit, threw out Bhinderanwale from Guru Nanak, Niwas of the Golden Temple Complex in December 1983, he fled to Akal Takht and established his Darbar and housed his militant armed gangs on its upper floor. No religious Guru and not even the Gurus had ever been permitted to live in the Akal Takht. What was deeply disturbing for a Sikh was that the Guru Granth Sahib was placed in the main hall on the ground floor. And, the Bir, the most sacred copy of Granth from the main temple, was placed in a room there. Bhindranwale had turned the upper floors into living residence. For any man to stand above the Guru Granth Sahib was the worst way to violate the sanctity of the Temple.

There were few brave souls, who dared to speak out as they couldn’t bear the utter contempt of the holy place. 80 years old Giani Pratap Singh, a former Jathedar of the Akal Takht, a highly respected spiritual guide for Sikhs, openly criticized Bhinderanwale for occupying the Akal Takht and stocking weapons inside the Temple. Next, he was brutally murdered at his home at Tahlil Chowk. Niranjan Singh, the Granthi of Gurudwara Toot Sahib, Granthi Surat Singh of Majauli, and Granthi Jarnail Singh of Valtoha were killed in cold blooded for raising their voices to protect sanctity of Golden Temple.

Surinder Singh, close to Bhinderanwale was killed in gang war. In a brutal retaliation, one of the conspirators, Malik Singh Bhatia was summoned to Golden Temple with promise of forgiveness, but shot dead at Parikrama. Bhatia’s female accomplice Baljit Kaur was tortured; her breast was hacked off then killed within Akal Takht. Her body with the mutilated corpse was found in the grand trunk road.

There were many such ghastly incidents like torture and murder committed by Bhinderanwale violating the sanctity of Golden Temple. Genocide of Hindus had continued with massacre of Sikhs, whosoever objected Bhinderanwale. Who would have freed Golden temple from Binderanwale’s crimes and underworld if not Indian Army by launching “Operation Blue Star?” Would Sikh Community ever find the disturbing answer?