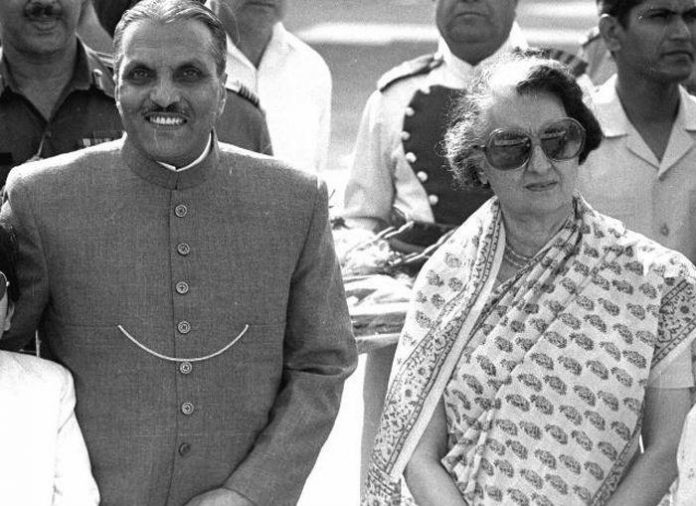 Following civil disorder, Muhammad Zia-ul-Haq deposed Bhutto in a military coup and declared martial law on 5 July 1977. Assuming the presidency in 1978, Zia played a major role in the Soviet–Afghan War. Backed by the United States and other Islamic countries , Zia systematically coordinated the Afghan mujahideen against the Soviet occupation throughout the 1980s. The United States, notably the Reagan Administration, was an ardent supporter of Zia’s military regime and a close ally of Pakistan’s conservative-leaning ruling military establishment. US politician Charlie Wilson claims that he worked with Zia and the CIA to channel Soviet weapons that Israel captured from the PLO in Lebanon to fighters in Afghanistan. Wilson claims that Zia remarked to him: “Just don’t put any stars of David on the boxes”.

In a 1965 speech to the UN Security Council, Zulfikar Ali Bhutto, former Prime Minister and former President of Pakistan, declared a thousand-year war against India.Zia implemented Bhutto’s “thousand years war” with ‘Bleed India Through A Thousand Cuts’ doctrine using covert and low intensity warfare with militancy and infiltration. In his address to the Islamic summit meeting, Pakistan President Zia-ul-Haq raised the Kashmir problem and said that “the problem of Jammu and Kashmir is a matter of continuing concern to the people of Pakistan and constitutes an impediment in the development of friendly relations with India”. He said: “Pakistan and India are committed to the normalisation of relations between them on the basis of the Simla agreement of 1972 of which the settlement  of the Jammu and Kashmir problem is an inseparable part. Both sides are bound by this agreement not to use force to resolve their problems.”

Pakistan provided assistance in the training and arming of Kashmiri terrorists, as well as sanctuaries to Kashmiri insurgents across the border. At times, the ISI’s assistance to the Kashmiri Islamists was even funnelled through Afghan rebel leader Gulbuddin Hikmatyar’s Hizb-i-Islami group, thus providing Islamabad with deniability In 1986, with growing experience in training, organizing and running the Afghan mujahideen, and with military supplies available (through US, Saudi, and other foreign assistance), Pakistan began expanding its operation to sponsor and promote separatism and terrorism, primarily in Kashmir, as a strategic long-term program. Operation Tupac is the alleged “codename” of an ongoing “military intelligence” contingency program run by the Pakistan’s ISI , active since the 1980s. The program has a three-part action plan to provide covert support to separatists and militants in Jammu and Kashmir. It was authorized and initiated by the order of the President of Pakistan Muhammad Zia-ul-Haq in 1988.

In May 1988, When Shia Muslims in Gilgit City in Pakistan Occupied Kashmir ,  commenced their festivities for Eid, a group of local Sunni Muslims—who were still fasting for Ramadan as their religious leaders had not yet declared the sighting of the moon—attacked them, sparking a series of violent clashes between Gilgiti Sunnis and Shias. Following a period of calm for about four days, the Zia-ul-Haq military regime reportedly sent a contingent of militants from the North-West Frontier Province and Federally Administered Tribal Areas of Pakistan, accompanied by additional militants from neighbouring Afghanistan and local Sunni tribesmen from Chilas to “teach (the Shias) a lesson”, which resulted in the deaths of hundreds of people. Shia Muslims in Gilgit District were attacked and killed by a thousands-strong force of Sunni jihadists, led by Osama bin Laden and backed by the Pakistani military. Shia women living in Gilgit District were also mass-raped by local Sunni tribesmen as well as the bin Laden-led militants.

According to a general involved with the “bleed India” strategy of infiltrating jihadists into Kashmir: “ It kept 700,000 Indian troops and paramilitary forces in Kashmir at very low cost to Pakistan; at the same time, it ensured that the Indian Army could not threaten Pakistan, created enormous expenditures for India, and kept it bogged down in military and political terms”.

Benazir Bhutto was sworn in as the Prime Minister of Pakistan on 2 December 1988. As Premier, Bhutto was reluctant to challenge the ISI’s support for the Islamist mujahideen forces in Afghanistan. The U.S. was funneling money to these mujahedeen through Pakistan, although preferred to deal directly with Beg, Gul, and Ishaq Khan rather than through Bhutto. In April 1989, Gul led an invasion of Afghanistan with the purpose of seizing Jalalabad, which was then to be formed into a capital from which the country’s anti-Soviet, Islamist-dominated opposition forces could operate.

Bhutto herself visited a training camp of Kashmiri militants in POK and pledged $5 million for their cause; she followed this with further statements in support of the militant groups.  Benazir Bhutto in a series of speeches notoriously threatened to make Jagmohan Malhotra , Governor of Jammu and Kashmir ,”Bhagmohan” (Bhag meaning “run”, implying he would flee out of fear), and that “Ham us ko jag jag mo mo han han bana denge” (transl.”We will make him JagJag Mo Mo Han Han”, implying he would be cut/torn to pieces by militants).

After 1989, when the Soviet Union Army exited Afghanistan, a large number of foreign terrorists who were fighting the Soviets were directed by the ISI towards Kashmir, which gave birth to terrorism in the Valley. The Soviet-Afghan jihad and the Islamic Revolution in Iran were becoming sources of inspiration for large numbers of Kashmiri Muslim youth. Some of the ISI backed millitants  of Kashmir  had actually received training in Afghanistan during the Afghan Civil War. The military and civil government of Pakistan sought to utilize these militants in the Kashmir conflict against the Indian Armed Forces in accordance with the “thousand cuts” doctrine so as to “bleed India”, using Pakistan’s nuclear arsenal as a shield.

On 22 May 1992, the Statesman carried its own Srinagar correspondent’s report saying: “The State Government has begun investigation following the reports that several hundred Afghan Mujahideen have sneaked in or (sic) fight alongside Kashmiri insurgents for separation of Jammu Kashmir (sic) from Indian Union, official sources said in Srinagar”. The Times of India of 23 July 1992 carried a report by Ravi Bhatia suggesting that Governor G.C. Saxena had Been sufficiently concerned about the implications of the influx of the Afghan Mujahideen so that he rushed to New Delhi to apprise the Prime Minister of the danger.

India Today reported in their cover story  on May 15, 1992 , “Hizbul Mujahedin, the most powerful Kashmiri militant group, is closely aligned with Hekmatyar and no matter who the ruler of Kabul is, given the general Mujahedin hostility towards India and the motivation to help ‘Islamic’ fighters, India can only expect trouble. Second, fundamentalism in Afghanistan will embolden the Jamiat-i-Islami in Pakistan whose chief, Qazi Hussain Ahmed, has often boasted that victory in Afghanistan has to be followed by victory in Kashmir. Third, and perhaps the most crucial, is the prospect of large-scale proliferation of the surplus weaponry of the Afghan war”. Hekmatyar became Prime Minister of Afghanistan from 1993 to 1994 and again briefly in 1996, before the Taliban takeover of Kabul forced him to flee to Iran’s capital Tehran.