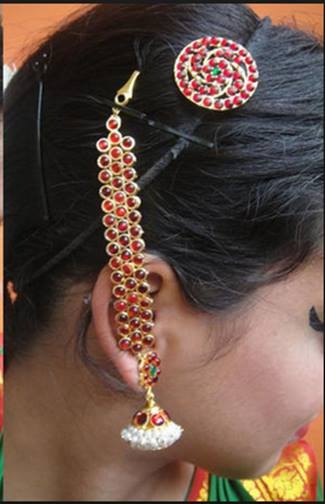 In some parts of India, the nose ring is never removed once a woman is married, and thus a nose ring is often considered to be a sign of marriage.

All said and done for the Indian woman who wishes to look beautiful in the traditional fashion, her shringar is never complete without the wearing of a sparkling nose ornament.

In India, Hindu infants of both genders get their ears pierced as early as 12 days after birth or before their first birthday or third or fifth year (depending on region and local custom).

According to Legends, The shape of the ear resembles the holy symbol ‘Aum’. It is believed that piercing the ear is just dotting the Aum. The ear is pierced by a priest during a holy ceremony (Karnavedha).

Karnavedha or the practice of wearing earrings is one of the Hindu Sanskars (sacraments) performed for a child. Karnavedha is a Vedic rite of passage. Common between males and females, it is intended to open the inner ears of the child for receiving sacred sounds. This rite has deep mystical and symbolic significance. It is believed that merely hearing sacred sounds has merit in that it cleanses sin and nurtures the spirit.

The continuous pressure in the ear lobe perhaps helps in keeping active that part of the brain responsible for memory. It must be mentioned here that piercing the ear at the bottom part of the ear lobe is the most recommended

Since the earliest times, wearing ear ornaments by married Indian women has been considered auspicious. Besides, earrings were considered to be a symbol of a woman’s wealth and her status in society. Elongated ear lobes were considered a sign of beauty and wealth – the longer the lobe, the greater the woman’s wealth. By appending ornaments to almost every part of the ear, the woman also ensured a continuous state of mental and physical well being.

According to Acupressure Therapy, the meridians connecting the brain pass through this area. This is said to help in the quick development of the brain. Hence, the earlier the ears of the child are pierced, the better the results will be. In certain Indian communities, even a boy’s ears are pierced.

Recent studies have identified the ear as a microcosm of the entire body. Some even say the point of vision in acupuncture is situated in the center of the lobe. Hence the practice of wearing earrings is thought to have some therapeutic value. Besides, in certain places, ear piercing was believed to be good for the eyes. It also sharpened the mind and drew off ‘bad humor’.

An earring can be described as a piece of jewelry that is worn on the ear.

According to Legends Ancient Prakrit and Sanskrit literature describe girls wearing fresh flowers in their ears. A range of floral earrings of gold, silver, or precious stones that have been popular over the centuries in India suggests that the forms of flowers were translated into precious jewelry. A type of flower known as the karnphul, i.e., ‘ear-flowers’ is considered particularly auspicious. Karn Phool is a large, round metal flower-form earring, with a central stud at the back being the equivalent of a flower stem.

Guest Writer
Previous articleCasteism in Christianity : While more than 70% of the Catholic converts in Tamil Nadu are Dalits, only 4 of the 18 Bishops are Dalit Christians
Next articleContaining this mutant is not going to be easy at all unless mass vaccinations of 2 Million doses per day happens : Dr Praveen Kumar
- Advertisement -