The ritual of Udupi Paryaya . 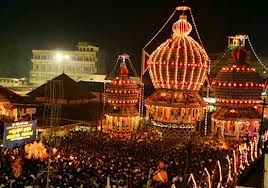 It is time for Udupi Paryaya now.

Paryaya is a Kannada word which translates to “Alternative” in English but here it can be taken as “Succession”.

We are all aware of Udupi Sri Krishna Temple which was congregated by Sriman Madhva of Dvaita Sampradaya. The idol of Kadagolu Krishna was worshiped during Dwapara Yuga by Rukmini, the consort of Sri Krishna in Dwaraka. The idol, in the course of being worshipped by hundreds of devotees at Dwaraka as eons passed by. At the time of great floods which drowned Dwaraka the idol got washed away covered completely by Gopi Chandana.

The idol arriving at Coastal Karnataka is a Divine story. In those days sailors used rocks to balance ship at the time of storm. One sailor loaded the Gopi Chandana rock which had the idol in it and started to sail southwards. As the ship came near Udupi the ship was stuck in a storm, Sriman Madhva was performing “Sandhyavandana” at Sindhu Sagara which is now called Arabian Sea. He happened to see the ship caught in the storm. Sensing danger he prayed for Sri Hari’s mercy to calm down the weather. He then signalled the ship with his upper garment to sail ashore.

After sailing ashore safely, the sailor fell on the Sriman Madhva’s feet with gratitude and requested him to accept something from his ship as a token of thankfulness. Sriman Madhva chose to accept the Gopi Chandana rock as the gift from Dwaraka. Later when he happened to break the rock, the idol of Kadagolu Krishna emerged from it. Kadagolu is butter churning stick, since Krishna is seen holding it He is Kadagolu Krishna.

Sriman Madhva not only installed the idol but also appointed Eight of his disciples to take forward his legacies and to have continuity to the worship of Kadagolu Krishna by succession.

Even today this practice of succession of worshiping and administering Sri Krishna temple at Udupi is in vogue that takes place once in two years through a ritual known as Paryaya. Initially Paryaya was held once in two months; subsequently changed to once in two years during the period of Sri Vadhiraja Thirtha.

Traditionally as a token of handing over charge, the outgoing Pontiff will hand over the keys of Sri Krishna temple along with a vessel called Akshaya Pathra to the incoming Pontiff.

In the temple town of Udupi the seat of Sriman Madhva, Paryaya festival is held around Makara Sankranthi time the sacred day Sriman Madhva installed the idol of Kadagolu Krishna.

This also happens to be 500th Paryaya Mahotsava. This colossal event is a celebration which is attended by devotees from across the globe. Though the pandemic may cause hindrance to the rituals to be done in public, the devotion remains same.

Sreeram Manoj Kumar
Previous articleNATIONAL YOUTH FESTIVAL – OUR WISHLIST FOR OUR PM
Next articleSulli Deals and Bulli Bai apps: Seculars and Liberals got a new EXCUSE to DEMEAN Hindutva
- Advertisement -