The promiscuouscuity of Kamla Das and her Anti Hindu stance won her awards and positions in Kerela….but she was used as a pawn by Sadiq Ali only to be abandoned and die alone ! 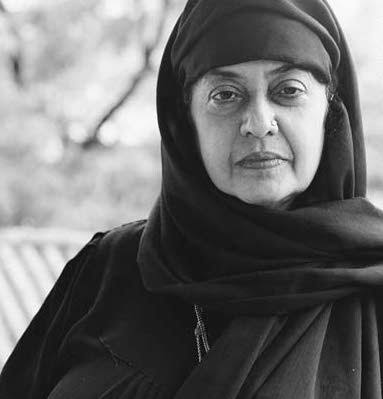 
Hindu society.
Born in the wealthy and well educated Nalapat Nair family of Kerala,
she was married to Madhav Das who served as a senior consultant of
International Monetary fund and a member of Kerala Children film
society; While she was held prominent position in the committee of
editors for the magazine Weekly of India, as a member of Kerala
Children film society and Kerala Forest Board and an orient editor for
the another magazine ‘The Poet’. Surprisingly it wasn’t for the jobs and
ranks she held in various fields she was awarded with Kerala Sahitya
academy award but rather her bold and promiscous literature which
she essayed during her marriage and after her husbands death. From
one of her collections gives a glimpse of her insatiabe lust :
Gift him what makes you woman, the scent of
Long hair, the musk of sweat between the breasts,
The warm shock of menstrual blood, and all your
Endless female hungers …” – The Looking Glass
In her Autobiography “My Story” she candidly drew her good and ill
experiences with men which gave her the reputation of a poet lost in
the valley of sexual pursuits. A mother of three grown and well settled
children, she expressed sadness of having not found the man who could
full fill her lusty cravings. With an eminent personality from olden days
turning to writing full-fledged porn literature, the then Kerala govt
decided to reward Kamala Das with prestigious and highest award for
literature written in Malayalam – the Ezhuthachan Award, inspite
resistance from the literary society of Kerala. Keeping in note the award
was given in order to appease Muslims of Kerala as part of sinister plan
which was to be laid out in future.
A very unsuccessful tryst with politics when she launched Lok seva
party aimed at promoting secularism, womens rights with anti – Hindu
outlook.
Canadian writer Merrily Weisboard reveals in her book “The Love
Queen of Malabar that she was snared into a love trap by a Muslim
politician. Her son was a friend and acquaintance to a young Muslim
man Sadiq Ali member of the Muslim league of Kerala. She fell in love
with a man 33 years her junior and a Muslim. At a ripe age of 65 after
carressing grandchildren in her laps she converted and took the name
Kamala Surrayya and married Sadiq Ali. The main objective of the
Muslim league and the Kerala govt was accomplished which was to
provide a immaculate role model for the women of Kerala to be
seduced into love jihad. The Saudi prince and the govt felicitated the
couple with money, praises and laudations
After the marriage n conversion all her sons and relatives abandoned
her and the man she craved to marry left very soon to join his earlier
two wives. With no loved one around she was diagnosed with cancer in
2009 and only the Kerala govt stood to her aid as to save the role
model they created to facilitate their politics. Rushed from hospitals in
Mumbai and finally in Pune she wished to meet her children and
grandchildren but to no avail. During her final eight months she said to have regretted deeply of her actions in the pain of the disease and
disclosed if someone would’ve corrected her by shooting a bullet in her
body without second thoughts.
She was buried in according the Islamic rites at Palayam Juma Masjid in
Trivandrum by the state govt with no close attendees.
In 2018 Malayalam film maker announced making a movie titled ‘Aami’
starring Vidya Balan as Kamala Surraya which she rejected instantly
reasoning she didn’t know much about the writer when every celebrity
or a commoner of Keralite origin is well acquainted with the name

Swapnil Awasthi
Previous article“Vision, Determination and Hardwork” – This is how India got its own COVID vaccines in less than a year
Next articleVulture International Media feeds on national tragedy in India by calling B.1.617 Indian variant, even if WHO never called virus with country name
- Advertisement -