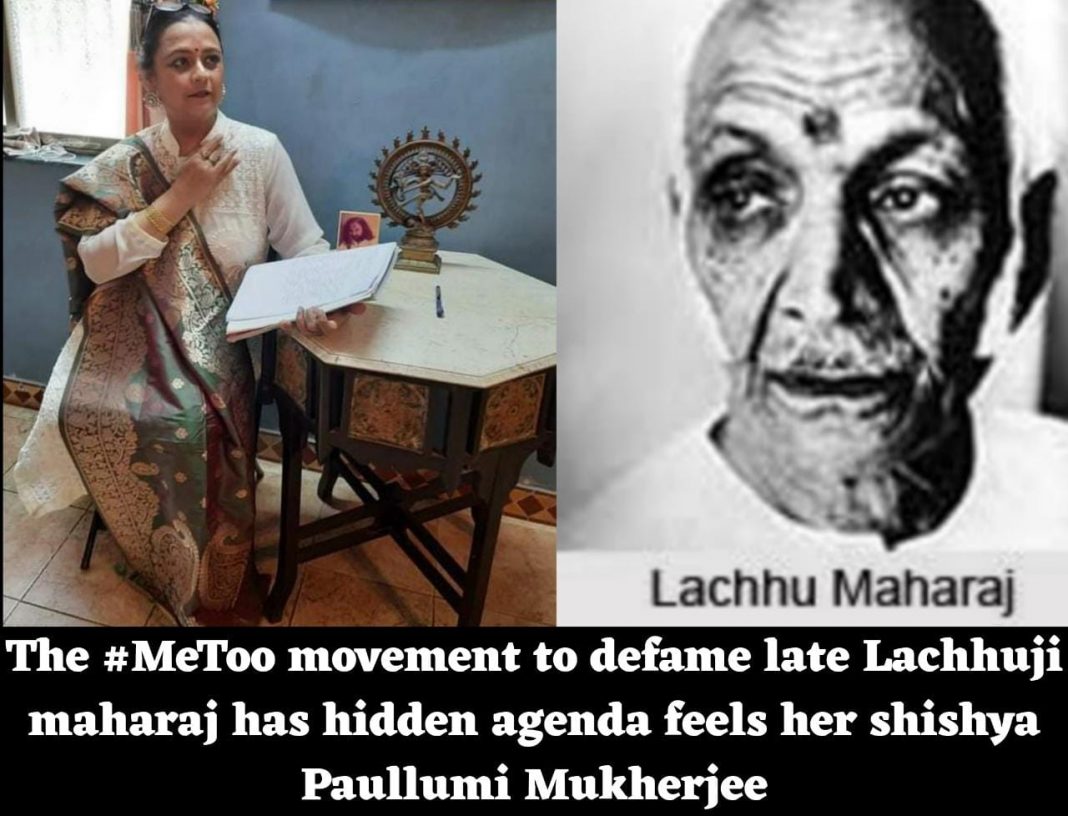 The ” Me Too” movement gained a lot of momentum a couple of years back….there were some people who were tried by MSM and SM on various platforms without giving them a fair chance.
Such was the state of affairs that it became practically impossible for the accused to escape the glare and the disdain surrounding the allegations made gainst him.
Gradually , some facts also emerged contradicting some accusations but then the harm was done.
As late as September 2020 a one sided article was circulated against, Kathak maestro, the legendary Lachchu Maharaj ji in the same context. It not only attacked one of the most renowned names in the field of Kathak but it went a notch higher in stooping to the very low by attacking the reputation of a person who is not even alive to defend himself. This very fact that the derogatory insinuations come 50 years after the maestro has passed away speaks volumes of the incredibility of the argument.
Sexual bullying by gurus…Predatory behavior….crude overtures…etc are some phrases that the article uses to defame THE GURUS.

But enough was enough for Paullami B Mukherji the only Gandabandh Shishya of Guru Lachchu Maharaj and Ramadevi Lachchu Maharaj. She could not take it lying down and shot a fierce rebuttal in defense of her Guru.
A Gandabandh shishya means
the Guru has accepted the Shishya as his/her own child making the
Shishya eligible to defend, protect and promote his/her Guru Parent
during their life time and after their death as per the ancient, time
immemorial culture and Guru Shishya Parampara of India.
” The Guru was great , the man was not “…says Sanjukta Wagh in the article in TOI.
Paullomi B Mukherji is pained and angered by the one sided claim which has maligned the image of her father like Guru.
She has clearly stated in a legal letter that the accuser and the publication must substantiate their claim. She makes a very valid point that so far none of the Shishyas have come forth with any such allegation in so many years.

Panditji is credited to have choreographed many stalwarts including stars from Bollywood, but his name has never been dragged into such muck.
The readers of the article had a strong reaction and they felt the selective liberal outrage always targets anything Sanatani and Indic.The Guru Shishya Parampara is a part of the historical ethos of this country and its this very parampara the liberals have a problem with.
Paullomi feels the muck runs much deep…the pattern begins with targeting the traditional methods of teaching…moves on to smashing patriarchy which is followed by smashing “Brahmin” patriarchy….and then soon this leftist eco system takes control of this tradition.

Its about time that voices against selective one sided and unsubstantiated allegations are made more vocal and heard . We should never allow our heroes to fall from their deserving pedestal.

Sarita K Chamaria
Previous articleMeet this ‘Unofficial Ambassador of India to Japan’, who is transforming the lives of the Japanese !!
Next articleShouldnt Judiciary be accountable and answerable to the public ?
- Advertisement -