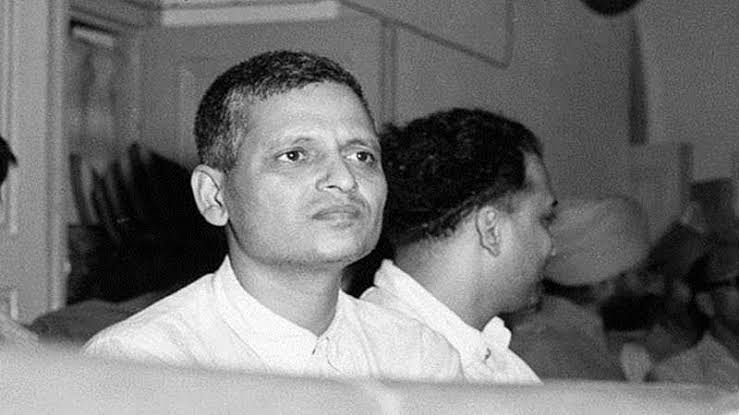 With the permission of the Hon’ble Supreme Court, the speech of Shri Nathuram Godse was published – ‘Why I killed Gandhi’, recently. For 60 long years it was forbidden, like the ‘forbidden fruit’ in its own nation! Nobody had seen it, lest it was read, circulated, discussed and debated threadbare by the countrywomen and countrymen.

As you all know – on January 30th, 1948 Godse shot dead and subsequently killed Gandhi. He did not escape from the scene of the shooting! He surrendered at the spot! The lawsuit was filed against 17 others, including Godse. During the trial, a request was made to the Chief Justice of India, at that time, so that Nathuram Godse, could speak why he killed Gandhi.

Permission was granted but subject to terms and conditions! ‘Your speech should not go outside the court as per the instructions of the government’, the Hon’ble SC directed. Later, after a long lawsuit against this condition, by his younger brother Late Gopal Godse, after about 60 years, permission was granted to keep his speech in public and debated threadbare.

Nathuram thought – Gandhi’s policy of non-violence and Muslim appeasement is turning a majority of Hindus into cowards. Ganesh Shankar Vidyarthi was brutally killed by Muslims in Kanpur and that Ganeshji was influenced by Gandhi’s style of thought. Gandhi chose to remain in complete silent in his assassination neither in his spoken language nor any editorial of his newspaper nor any statement! He used to put his views on all subjects under the sky!

The 1919 Jallianwala Bagh massacre was in full swing. It created a furore in the international media and Gandhi was asked to file a case against General Dyer, the villain who committed this heinous crime and pogrom and thereby unpardonable murder of innocent murderers. But Gandhi had cleanly refused to file a case, even though he was a lawyer, who studied in England where civil society exists.

Gandhi sowed the seeds of communalism in India by supporting the Khilafat movement! It a Caliphate movement, which was spun as Khilafat to fool the Indian masses, especially Hindus. He used to describe himself only as a benefactor of Muslims. Mopla Muslims killed 1500 Hindus in the state of Kerala and converted 2000 Hindus! Gandhi did not even oppose!

March 23rd, 1931 – Bhagat Singh was hanged to death. The whole nation requested Gandhi to stop the execution of great freedom fighter. Gandhi did not make this request considering Bhagat Singh’s activity as inappropriate! If he wanted his execution by the Britishers, would have been stopped by the Britishers.

Gandhi asked Excellency Hari Singh, the King of Kashmir, to resign – because Kashmir is a Muslim – majority state! He told Maharaja Hari Singh to go to Kashi and do penance! But in the case of Nizam of Hyderabad he was both deaf and silent. Gandhi’s policy changed, especially when it came to religion. Later, due to the nationalistic activism of Iron Man Sardar Vallabhbhai Patel, Hyderabad was annexed by India, conquered and merged with India after India got freedom.

At that time the killing of Hindus was going on in Pakistan. Several Hindus migrated to India to save their lives. They took refuge in a mosque in Delhi. Muslims began to oppose it. On a terrible winter night, mothers, sisters, children and the elderly were all forcibly evicted from the mosque. Gandhi remained silent!

Gandhi arranged to read the Qur’an and pray in the temple! Instead, he could not arrange to read the Gita in any mosque! Numerous Hindus and Brahmins protested against it – Gandhi did not bother. He was silent and did not open his mouth.

Sardar Vallabhbhai Patel won the Lahore Congress elections, but Gandhi insisted on giving the post to Nehru as its President. He was perfect in making his wish come true. Dharna, silent protest, fasting, anger, stopping the conversation – with the help of these ‘rope tricks’, he used to blackmail fellow congressmen. He did not judge the decision either right or wrong.

On 14th June, 1947, there was a meeting of the All India Congress Committee (AICC) in New Delhi. The topic of discussion was the partition of India. This proposal was to be rejected. But strangely, Gandhi supported the proposal to divide the country. This is what he said one day – if he wants to divide the country, he has to do it on his dead body! Millions of Hindu died, but he always remained silent! He never ordered the Muslims to maintain peace – as much as the advice is only on the Hindus! Even though, if he had appealed to Muslims, they had become too bold and brash and would have objected to his hollow appeals and would have totally rejected the appeal. The country watched this one sided peace overtures at Calcutta.

Gandhi gave birth to the “Muslim flattery” in the guise of secularism. The price of his pseudo secularism is being paid by the nation every day. When Muslims opposed making Hindi the state language – Gandhi admitted! He gave a strange solution – “Hindustani” Bhasha (Hindi and Urdu mixed Khichri)! He began calling Badshah Ram, Begum Sita to start with!

He bowed his head in opposition to some Muslims and did not allow “Vande Mataram” to become the national anthem of the country!

Gandhi has repeatedly called Chhatrapati Shivaji, Maharana Pratap, and Guru Gobind Singh as misguided patriots! But on the other side he used to call Muhammad Ali Jinnah “Qaeda Azam”! What a strange thing!

In the year 1931 the Indian National Congress formed a committee to decide what the national flag of independent India would look like. This committee unanimously decided that there would be a flag of deep saffron cloth with a spinning wheel in the middle. But Gandhi’s insistence is to make it Tiranga! All bowed their head on his wish!

When the proposal to rebuild the Somnath Temple, was put in the Indian Parliament on the initiative of Iron man Late Sardar Vallabhbhai Patel, he opposed it. He was not even in the cabinet! But strangely enough, he started a hunger strike on January 13th, 1948 – to build a grand mosque in Delhi at the government’s expense! Why this duplicity? He may not think Hindus are Indians! Well, were you a Hindu at all?

It was decided by Gandhi’s mediation that – after independence, India will give 75 crore rupees to Pakistan. 20 crore was given at the beginning. The rest 55 crores was to be given later. But on October 22nd, 1947 Pakistan invaded Kashmir! For this betrayal of Pakistan, the Union Cabinet decided that the rest of the money would not be given to Pakistan. But he sat down with a stick! Started blackmail again – hunger strike again. In the end, the government was forced to pay the remaining 55 crore rupees to the traitorous Pakistan!

Seeing his love for ‘Jinnah’ and ‘blind Pakistan love’, I can say that he was in fact the father of Pakistan – not India. He speaks in support of Pakistan at every moment – no matter how unjust Pakistan’s claim is!

These were some of the statements of Nathuram Godse given in court during the trial.

I was disturbed by Gandhi’s support in building the Muslim League and Pakistan. Gandhi went on a hunger strike to get Rs 55 crore for Pakistan. The plight of the Hindus who migrated to India for persecution in Pakistan stunned me. Unbroken Hindu state was not possible for Gandhi to bow down to the Muslim League. It was unbearable for me to see my mother split into pieces for one of her son. I became a foreigner in my own country.

He was abiding by all the injustices of the Muslim League. I decided that I must kill Gandhi to save Mother India from disintegration and misery. And that is why I killed Gandhi.

I knew I would be hanged for it and I was ready for it. And if it is a crime to protect the motherland here – then I will commit such a crime again and again – every time. And until the Indus River flows into the whole of India – do not immerse my bones. At the time of my execution, I had a saffron flag in one hand and a map of the whole of India in the other. Before I go to the gallows, I want to say the Victory of Mother India.

O Mother India – I am very sorry that I have been able to serve you only this. “

Some historians of that time mention that he wanted to build a secured road between Lahore and Dhaka so that difficulties faced by West Pakistanis to travel to East Pakistan should be minimised forever. Little did he visualise that Muslims are dreaded human rights baiters and sooner than later East Pakistan will become an independent nation called as Bangladesh forever. His so called experiments with celibacy in those times are a matter of shame and disgust for common citizens of the country.

Thank God he is no more. He his hung in photo frames in all Government offices. That’s all he deserve in modern India!

A time has come for the nation to remove his image from currency notes and replace with people like Swami Vivekananda, Netaji Subhash or Kusha Bhau Thakreji or Samrat Ashok or Kalam saheb.

It’s time to replace the icons who were tainted and painted with colour of anti-national feelings.