Tale of Two Movies: The Power of Unity 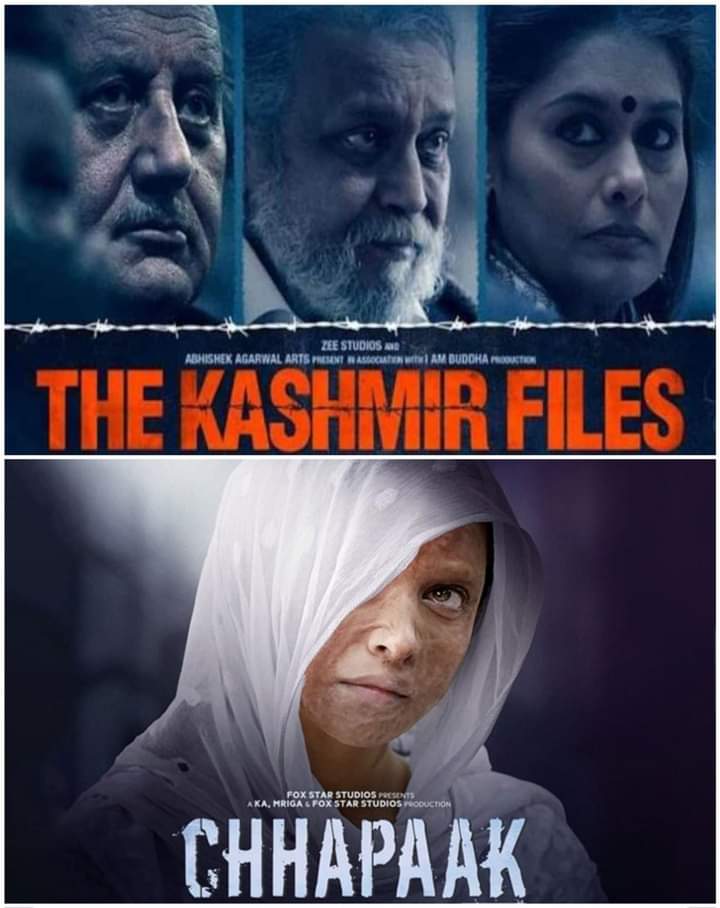 January 2020: Deepika Padukone went to JNU to meet the Anti-CAA protestors. It was thought to be a clever ploy. Some allegations claimed Deepika received ₹ 5 Crore from ISI handlers. Since we have no concrete evidence about it, let’s leave it there. But did this “gesture” or “promotion” help Deepika’s movie ?

“Chhapaak” was supposed to be a decent movie about travails of an “Acid attack victim”. Made with a modest budget of ₹ 36 Crore, it is supposed to have grossed ₹ 55 Crore as lifetime collection. Considering the Star-promotions and the economics of films, Chhapaak has to be considered a below average, also ran movie if not outright flop in its theatrical release.

That was pre-COVID world. Star films were doing well in those days. Yet, Chhapaak fell flat.

March 2022: in the middle of a pandemic, “The Kashmir Files” made with a shoestring budget of ₹ 16 Crore is heading towards ₹ 350 Crore gross. None less than Aamir Khan has called it among “All time hits” because it has grossed over 20 times of it’s investment. The staggering fact is, TKF is still going strong and may cross ₹ 400 Crore worldwide collection.

Gigantic success of TKF and the failure of Chhapaak. Is this just happenstance ? Is it just one off phenomenon unrelated to each other ? Or is there a lesson ? The emphatic answer is, “Yes, they are intricately connected. This is result of unity. Unity of Hindus.” Liberal Jama’at consoles themselves claiming, “Chhapaak was not an entertainer. Hence it didn’t do great business.” So do they mean to say, “The Kashmir Files” is an entertainer with 5 fights 4 songs and an item number ?

Right during the release of Chhapaak, I had claimed this and I reiterate now. Leftists and Islamists are largely OTT animals. They’re suckers for freebies. The Arvind Kejriwal fans. A significant section of the woke crowd actually prefers watching “downloaded” or pirated movies on their mobiles. It’s the Hindu middle-class that decides the fate of Indian movies, except probably in Kerala, Tamilnadu, West Bengal and North East.

Through all these decades, the entertainment industry used their soft-power to feed us with movies that pushed Communist and Islamist agenda and subtle Anti-Hindu narrative. We swallowed everything because we were naive and we had no choice. Social media and arrival of Modi changed everything. We began questioning. This questioning was the beginning of “Era of intolerance”.

Several Star movies have flopped. Netflix has slipped miserably in India. Akshay Kumar’s “Bachchan Pandey” and John Abraham’s “Attack” are the latest casualties. They were supposed to be entertainers. But nobody was interested. Deepika and Ranveer’s “83” recreating the story of India winning 1983 Cricket World Cup flopped. With a making budget of ₹ 280 Crore and lifetime gross of ₹ 193 Crore, “83” left the makers as well as the industry devastated.

“Why and how did this become possible ?” We must remember the #NoBindiNoBusiness hashtag campaign initiated by Shefali Vaidya during Diwali 2021. Seniors from the Ad-world were forced to admit, “You cannot sell a product by hurting the sentiments of a segment of people and antagonizing them.”

We’ve been taught about “not hurting minority sentiments” since ages. It was the “normal” not to hurt minority sentiments and run roughshod over the religious sentiments of Hindus, because “WE” watched those movies and made them superhits. When WE decided stop tolerating this humiliation, they branded us “Intolerant”.

With movies collapsing like nine pins, “some of them” have realized their folly. It isn’t as if entire Bollywood has turned sensitive to Hindu sentiments. The Leftist and Islamist cabal will never be sensitive to Hindu causes. They’re the ones who wanted to sabotage “The Kashmir Files” with propaganda. It didn’t work because of our unity.

Vivek Ranjan Agnihotri has begun a revolution. He has laid the foundation stone for a parallel to BollyDawood. Many Nationalists didn’t like Karan Johar and Ekta Kapoor being honored with Padmashri. But there’s a definite design behind that. KJo and Ekta are established film-makers with money as well as talented people in their circles. Yogi-ji is planning a film city in Noida and we need people from industry on our side. We need people who won’t make Anti-Hindu movies anymore. That’s where KJo and Ekta are expected to be useful.

The success of RRR, that shows Hindu symbols with glorious pride and brings Ram, Sita and Bhim is a clear indication of the mood of the people. If you insult us and our culture, don’t expect us to watch your movies. We’ll definitely watch if you take pride in India, our history, heritage and heroes.

Moral of the story: Hindu unity is real and it works wonders if we stay united.