Sanatan Dharma & the curse of caste base reservations 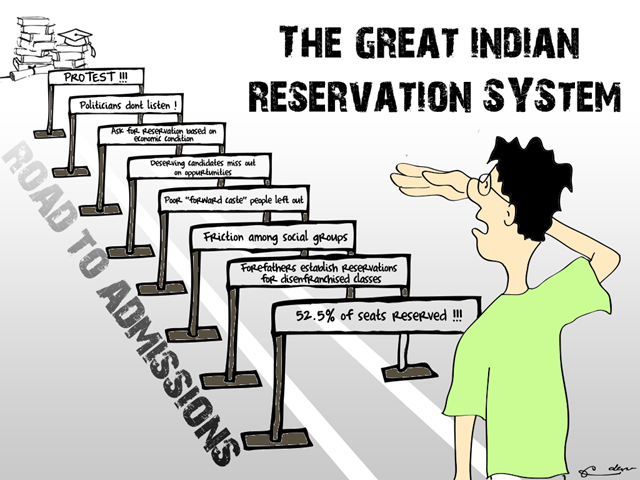 Sanatana Dharma endorses a particular Dharma which has its traces in the concept of Ritam. Ritam is that which is definitively responsible for the proper functioning of the natural, moral and sacrificial orders in this entire universe.

Dharma is conceived as the course of action which if followed would benefit the person both socially and spiritually. The failure to follow Dharma results in Adharma which is social and spiritual fall. If Dharma is followed, the society we live in is in harmony.

However it is not only the harmonious living that could be the criterion. We find Dharma as one of the vertex in the triangle alone with Artha and Kama to realize Moksha. While Dharma stands for the idealism, Artha is for profits and Kama for pleasure. It is human tendency to fail to act on account of Dharma alone by sacrificing Artha or Kama. Since ages there is a great debate on which vortex should be given primacy in deciding what the correct course of action is. Every philosophy tells that for pleasure and profits one should not breach idealism.

Dharmic system is predicated on a universal view of a system which decides the ideology of every person on his behaviour and his work. That ideology happens to be the Svadharma which unfurls as the basis of that persons Dharmic ideals in the society he is living.

In Vyadha Gita we have a butcher teaching Dharma to a Sanyasi. The episode which appears in Mahabharata describes the importance of performance of Swadharma (prescribed duty). According to the story, a Vyadha (Butcher) who is engage in mincing meat which is his Swadharma is capable of teaching a Sanyasi on how to attain liberation by the performance of Swadharma. In Dharmic system there is nothing which can be pointed out as “Idam Ittam” (definite rule)

After the advent of British to our country the Dharmic system was disturbed. They had this conception that justice system has to be based on certain definite rules. The law was amalgamated to Anglo-Hindu system which was against the grain of our ancient Dharmic system. Thus the legal system and thereby our Indian Constitution is a peculiar continuation of the strange world of Anglo-Hindu system. This peculiar system is trying to make sense in a “modern” western way of the very ancient Dharmic society. Hence our Constitution tries to address the problems of “Jati” through westernized system of reservations not realizing that it would in effect entrench the system further.

Reservation has pulled my country down. Appraising of certain caste in the name of equality has brought disaster to justice system. We have applicants faking the caste certificates to have a lick at the reservations provided. The main reason to have reservation was not to promote inequality but to promote equality. It is statistically proven that the reservation based on the caste system created imbalance in society and hence there are castes which do not get fair and equal opportunity to grow and participate in economy and social activities. This reservation system does not look at justice but caters only equality and hence it does not account for the upper caste poor and unfortunately hold good even for the lower caste rich.

The parents of the young man who lost his life in Ukraine blame the reservation system. Though he had secured 97% in Pre-University he failed to get a seat in medical college. The donation of the course in the private medical college was too high, he had to search for education outside country which was cheaper.

Shame on the system for encouraging reservation even after so many years of independence.