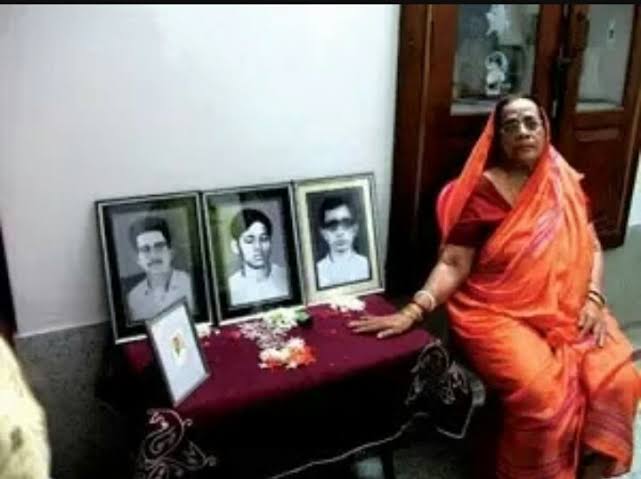 While the nation is still reeling under shock and horror at the sight of Sharada Pandit being force fed with rice stained with blood of her husband, who was gunned down by radical islamist terrorists, right in front of her eyes, in ‘The Kashmir Files‘, a reality with the Ganjoo family of Kashmir in 1990, a similar incident rocked rural Bengal more than a half a century ago, which bears manifestation of the bizarre similarity in modus operandi of the Leftists & radical islamist terrorists, indicating their unholy nexus, which again the instant film tried to portray.

It was on this day, 52 years ago, the brutes in the form of CPI-M cadres unleashed untold horror on the members of the Sain family in Bardhaman, West Bengal because they were loyal and dedicated members of the Congress. It all started from 7.30 in the morning, with stone pelting at their house. After that a hoast of Communist terrorists barged into their home and started killing the male members in the most unthinkable, brutal manner. Even a private tutor, Jitendra Rai, who was there to teach the kids, was not spared. The elder brother, Naba Kumar Sain was killed first, his eyes gouged out. The Sain brothers, Pranab Kumar Sain and Moloy Kumar Sain were hacked to death in front of the family. Later their mother was force fed rice soaked in her sons’ blood. She fell sick and had to be hospitalized. She survived but lost her mental balance.
One of the Sain ladies, Swarnalata Josh, sister of the slain Sain brothers, who visited her parents’ place for her one month old son’s ‘Sashthi’ ritual, recollected the tales of horror that her family had to forebear. The Leftist Harmads tried to throw her baby into the fire but was rescued by the family members.

The baby of that day, now 52, Amrit Kumar Josh had stated in a newspaper interview in 2011:
“I could have died that day. But like my family, I still bear the mental scars. It’s unfortunate that we are still ruled by a party that believes in ruling by terror”.
Such tales of horror and brutal killing bear resemblance with what the ISIS does these days. Though Mrs. Indira Gandhi visited the Sain home after the macabre incident, the Sains still await justice. There is no news of any punishment handed down to the Leftist terrorists even after the Congress was voted back to power in Bengal in 1972. The perpetrators and executors of the Sainbari incident were rewarded with plum posts in the West Bengal government when the Left Front assumed power there in 1977 with the best ministerial berths. Most of the perpetrators of the gruesome killing are dead now.
Shockingly, the Congress and the Left are political allies now, leaving behind all the animosity between their dedicated ground level workers who went to the extent of killing each other, all for the sake of political ideology.
It is said that politics makes strange bedfellows. The Congress-Left alliance now is a vivid example of that, when they were believed to be the direct adversaries all along till the early 2000s. This is also indicative of their deceptive and unfaithful nature, wherein they used their ground level workers for political benefits, caused them to lose their lives leading to untold misery of their family members and then merrily discarded them again for political benefits.

It is ironical that it is the BJP who pays tribute to the slain Sain brothers every year on this day and the grotesque incident is talked about more often after BJP came to power at the Centre in 2014. A documentary film denoting the grotesque Sainbari killings and many more of such massacres which rocked Bengal subsequently, known as ‘Sainbari to Sandeshkhali – 50 years of Bengalis persecuted’, made by Sanghamitra Chaudhuri, Bengal BJP leader and film maker was screened at the 52nd IFFI at Goa last November.

The Sainbari incident is a vivid example of the barbaric and deceptive nature of both the Left and the Congress, who, at the end of the day, are ideological partners and care nothing for those who are loyal to them. This needs to be reminded to those, who still owe some semblance of loyalty to these two outfits.