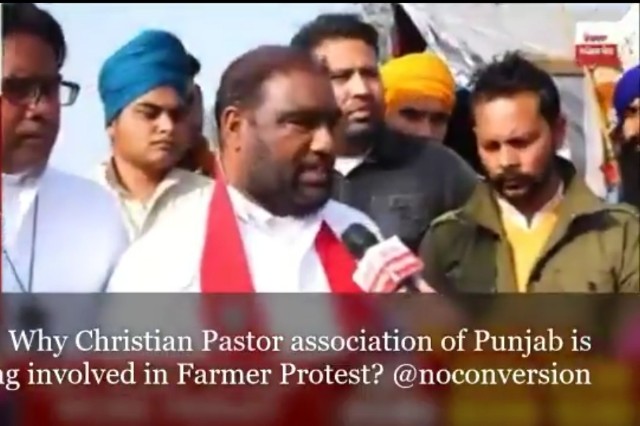 The farmer’s movement has been hijacked by the Khalistanis and the anti-national elements were helping them with their vested interest. Attorney General KK Venugopal had told the Supreme Court that the Khalistan supporters have infiltrated the farmers’ protests.

Several Media houses reported, Canada-based Poetic Justice Foundation, a group founded by MO Dhaliwal, had created the toolkit on the farmers’ protest for Greta Thunberg. According to several Indian Media houses, the toolkit was created to garner support for the ongoing farmers’ protest and was allegedly provided to Greta Thunberg as part of a “larger conspiracy to create disharmony”.

After the international conspiracy against India and Khalistani interference, now the Christian Pastor Association is getting involved in Farmers Protest.

Similar to CAA and other protests, the Farmers protest seems to be hijacked by anti-India forces. Addressing a gathering of demonstration outside the Indian Consulate in Canada on January 26, MO Dhaliwal said that their real goal is to break India into several parts. It may be recalled that Dhaliwal’s uncle, who was eliminated by the Indian security forces during Operation Blue Star in 1984, was a top Khalistani terrorist.

Farmers have been protesting on the different borders of the national capital since November 26 against the three newly enacted farm laws: Farmers` Produce Trade and Commerce (Promotion and Facilitation) Act, 2020; the Farmers Empowerment and Protection) Agreement on Price Assurance and farm Services Act 2020 and the Essential Commodities (Amendment) Act, 2020.