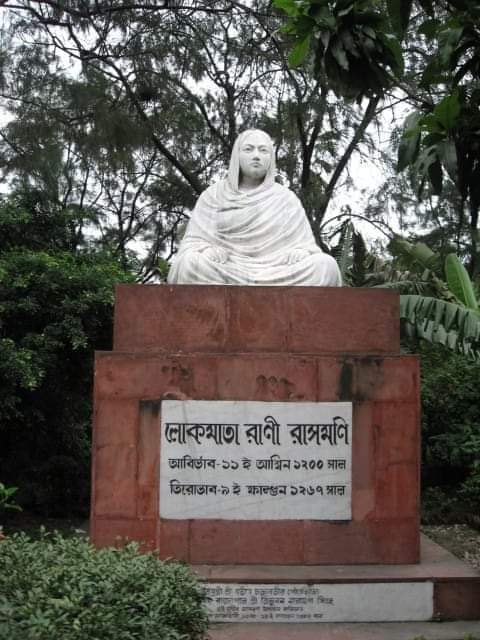 A glowering tribute to the brave and spirited Rani Rashmoni on her 228th Birth Anniversary. The Rani was married to the Zamindar of Jan Bazar, Kolkata Babu Raj Chandra Das, at the age of 11. She proved to be an able consort to the zamindar, assisting him in his administration. The couple had 4 daughters and her son-in-law, Mathur Mohan Biswas was famous for being the main driving force in her administration.

Rani Rashmoni took over the reigns of the zamindari after the death of her husband in 1836, when she was 49 years old. She proved to be a capable administrator as the fame and prestige of her zamindari grew during her reign while she continued to lead an austere and pious life.

Her spirited and aggressive resistance to the British are part of all households tales. She compelled the British to withdraw the river tax that they had imposed on fishing in the river Ganges, thus adversely affecting the livelihood of the poor fishermen, by blocking shipping trade on a part of the river. She defied the British dictat of stopping Durga Visarjan on grounds of disturbing peace. The British had to bow down to massive public support for Rani Rashmoni and rioting in her favour and withdrew the penalty imposed on her for defying their orders.

The Rani is revered to this day for her philanthropic and religious work. A divine revelation led her to found the famous Dakshineswar Kali Temple, where she appointed Sri Ramakrishna Paramhansadev as the head priest (known as Gadadhar Chatterjee at that time). She also oversaw the construction of the road connecting Subarnarekha river and Puri for the pilgrims. She also pioneered the construction of the ghats such as Babughat, Ahiritola Ghat and Nimtola Ghat for the daily bathers. She also donated generously to the Imperial Library (National Library) and Hindu College (now Presidency College).

The Durga Puja celebrations at her residence in Jan Bazar is very well known in Kolkata.

Ranita Indic
Previous articleSaga of poll violence continues in WB by-elections.
Next articleLand Jihad in Dev Bhoomi – Hindus are protesting to remove the Illegal Mosque at Tehri Dam but Admin is in Deep Slumber
- Advertisement -