Radicalisation of the French Society 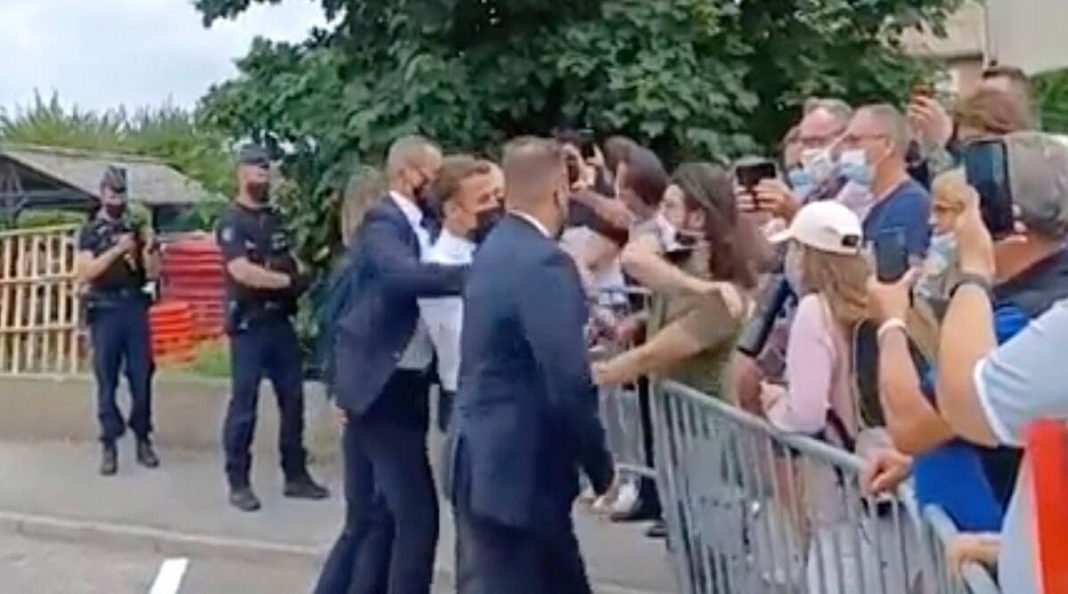 French President Emmanuel Macron was slapped in the face by a bearded man wearing a khaki in a crowd of thin onlookers, while on a walkabout in Southern France, where he came running with long dashing strides to meet people, video of the incident showed.

President Macron’s security entourage quickly intervened to pull the attacker to the ground and move the President away from him. In 3 seconds flat he shrugged off a security guard who tried to bundle him away. This is a brave President who doesn’t fear confrontation, in a deeply divided society, with constant efforts by the mullahs and maulvis to stir tensions and nonexistent issues as the society wants to integrate Muslims with the main stream.

Population of Muslims have crossed a threshold level and it is now difficult to control them. A time will shortly come like in Israel, where they can form a political party and form a government to pass laws, which will be detrimental to the future generation.

Ghettoisation of the society is large and Muslim kids find it difficult to get assimilated with the normal society. Then they become truck drivers and kill people by driving over the crowds.

The slapper could be heard shouting out “Down with Macronia” (“A Bas La Macronie”) before he delivered the slap. Two people were reportedly arrested in connection with the incident, which took place as President Macron met restaurateurs and students to talk about how life is returning back to normal after the China Virus pandemic, which played havoc and shut down their tourism, travel and leisure industry.

President Emmanuel Macron was on an official visit to the south-east of France. In a video circulating on the social media, President Macron is seen walking up to a barrier on a trip to Tain-l’Hermitage outside the city of Valence. A man in a green T-shirt slaps President Macron in the face before security officers quickly move in. The President, meanwhile, is pulled away. Two men have been arrested following the incident, French media report but a Twitter’s Tweet mentioned 12 onlookers were arrested.

President Macron later called it an “isolated event”. “We must not let ultra-violent people take over the public debate: they do not deserve it,” he told French newspaper Le Dauphiné.

The man reportedly shouted “Down with Macron-ism” as he slapped the President, as well as “Montjoie, Saint-Denis” – the battle-cry of the old Kingdom of France, in reference to the banner of King Charlemagne. In the video President Macron briefly returned to the barrier after the incident and once again interacted with the crowd. “I continued and I will continue,” he later told Le Dauphiné. “Nothing will stop me.” Brave man indeed!

As yet the identity and motive of the man are unclear, the local prefecture said he and another individual are being questioned by the gendarmerie, in a statement reported by AFP news agency. Officers were out in force on the streets of Valence shortly after the slap, according to one French journalist’s tweet.

Who protects President Macron? French presidents are protected by the Security Group for the Presidency of the Republic, known as GSPR. It was set up in the year 1983 and is reportedly composed of 77 men and women to protect President Macron during such events. According to French TV Channel BFM, officers scout locations before a presidential visit. Armed personnel are then assigned to closely guard the President on the trip itself. The channel reports that 10 members of the GSPR were with President Macron on Tuesday’s trip. Many of these officers also mingle with the crowd.

What’s been the political reaction?

Politicians have swiftly denounced the incident.

Prime Minister Jean Castex told the National Assembly shortly afterwards that while democracy meant debate and legitimate disagreement “it must never in any case mean violence, verbal aggression and even less physical attack”.

And far-right leader Marine Le Pen posted her own condemnation, saying that “while democratic debate can be bitter, it can never tolerate physical violence”. President Macron is currently touring France as the country prepares to ease its coronavirus restrictions.

President Macron is currently on a tour of France and had just visited a hotel school in Tain-l’Hermitage. His visit to the area was set to continue on Tuesday, officials said, with a trip to a vocational institute for 25-30 year-olds. The President’s visit comes on the eve of a major step for French bars and restaurants, which will be able to reopen to indoor customers after seven months of closure. France’s overnight curfew is also being pushed back from 21:00 hours to 23:00 hours on Wednesday. “Tomorrow, a new step will be taken,” President Macron tweeted after his visit to the hotel school. “Life will resume in all our territories!”

France is in churn at present due to the forthcoming Presidential elections as Le Penn created a controversy due to ex-army veterans and French government has vowed to take action and secondly France is serious to control the Madrasas and want the inclusion of radicalised Islam to come back to the main stream and it also plans to deport back Muslim radicals back to their country of origin and check their credentials.

On Twitter the man was hailed as a ‘brave man’ whose slap on behalf of 1.8 Billion Muslims was saluted. Democracy and freedom is dangerous, at least to the leaders! People don’t hesitate to slap them in the face! Otherwise that day will come when the world will follow ‘democracy with Chinese characteristics, a clear fun to denounce Chinese form of its democracy.

Guy who slapped President Macron follows fascist and Mocharist accounts on the social media, part of the same online cultures in France which fantasize about extermination politics. He yelled ‘Montjoie Saint Denis, a royalist ‘battle cry’. These fascist colonialists does this all the time. He doesn’t regard France’s massive and violent interference in Libya as foreign. President Macron is behind deaths of tens of thousands of Libyans. He was stopped in his tracks by Turkey. He was slapped hard for his deeds in the face.

Thank the Lord, he was not carrying a knife!