OBC Bill : Is it a genuine quest for social justice or a piecemeal political response? 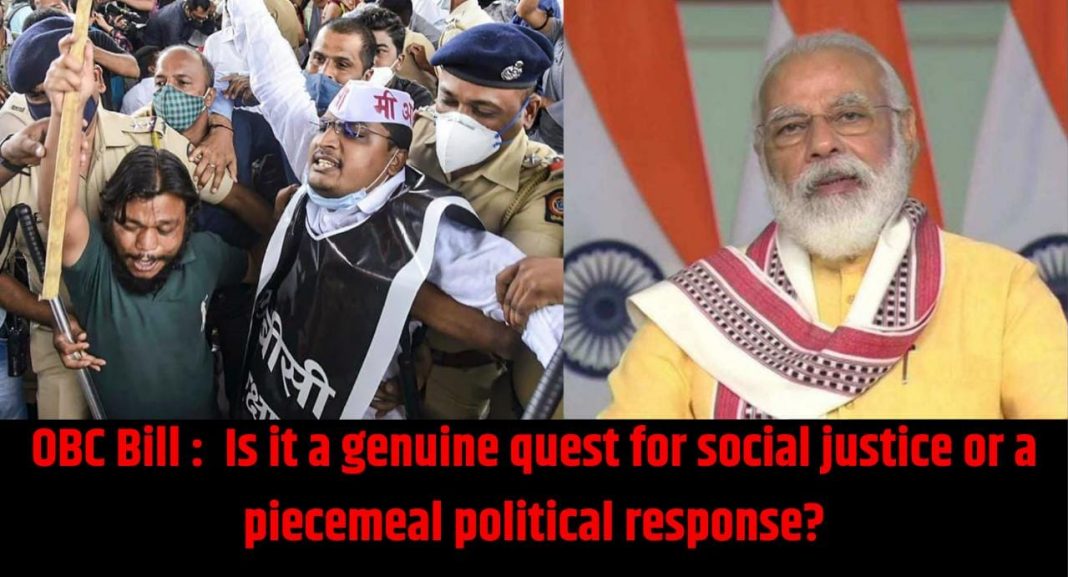 On 11th August 2021, the Parliament passed the 127th Constitutional Amendment Bill that saw a rare consensus with even the opposition parties unanimously voting in favor of the amendment. The proposed amendment seeks to restore the power of the state governments to notify the list of Other Backward Castes(OBC), a prerogative which was struck down by the Supreme Court in May this year. The Apex Court while hearing the Maratha Quota issue on 5th May 2021 had upheld the validity of the 102nd Constitutional Amendment that empowers the President will notify the list of Socio Economically Backward Castes (SEBC) on the advice of National Commission for Backward Classes (NCBC) set up under Article 338B but categorically limited the powers of state governments to determine state list of OBCs. This decision was resented by several states, especially those ruled by the opposition parties on grounds of violation of the principle of social justice and denuding the legitimate rights of state governments to identify the list of backward castes based on the conditions prevailing in their respective states.

The significance of the bill :

Arguably and justifiably so, the BJP led Central Government felt the need for such an amendment anticipating the political fallout of the Supreme Court Verdict which could have derecognized the privileges extended to many such castes who are enlisted as OBCs according to the state lists. “Nearly 671 OBC communities would have lost access to reservation in educational institutions and in appointments if the state list was abolished. Moreover, nearly one-fifth of the total OBC communities would have been adversely impacted by this’’ – according to a source in the ministry. With politically crucial state of Uttar Pradesh going to polls next year along with several other states like Uttarakhand, Punjab, Goa, Gujarat, Himachal Pradesh and Manipur – BJP could ill afford to antagonize the OBCs or provide an ammunition to the opposition to corner it.

BJP’s rise in the Hindi belt states of Uttar Pradesh, Bihar, Madhya Pradesh and also to a great extent in its strongest bastion Gujarat could be attributed to the careful social engineering forged by the party in wooing the non dominant backward castes to its kitty along with the traditional upper caste voters and thus forming an unassailable electoral bloc waxed by the ideology of Hindutva – a phenomena most eloquent post 2014. OBCs are not a homogenous grouping – the dominant OBC castes like Yadavs in UP and Bihar or say Vokkaligas in Karnataka rose to political prominence as early as late 1980s and early 1990s. They assumed political salience and hence cornered most of the benefits like reservation available to OBC communities thereby leaving out the non dominant ones. BJP has wooed many such non dominant castes in the recent past like Lodhs, Sainis, Mauryas, etc that have yielded handsome electoral dividends for the party like in Uttar Pradesh. Since these castes constitute an amorphous constituency of voters who have traditionally not backed any particular party but are considered to be the swing voters, they play a crucial role in determining poll outcomes.

Our Constitution is premised upon the idea of social justice and hence it becomes a constitutional obligation on the part of the state to extend the pillars of affirmative action to the most disadvantaged and needy sections of the society. The OBCs comprise of the largest segment among Hindus. The concept of ‘Antyodaya’ as espoused by Pandit Deen Dayal Upadhaya calls for the elevation of the last person in the queue. Thus, widening the prism of social justice by bringing the marginalized and subaltern into the orbit of democratic governance and power sharing is a deference to the philosophy of constitutionalism and equality to all the citizens of India irrespective of their social status or primordial identities. The OBC Bill can be seen fulfilling some of these broad objectives. By restoring the rights of states to identify and categorize communities as OBC or SEBCs, the bill seeks to reconcile the acceptance of social diversity albeit cohesion in a federal democratic polity.

Implications: Mandal 2.0 or a recipe for social fragmentation ?

While the passage of the bill is a hope for settling the simmering tensions between states and the Union over the fate of OBCs following the SC verdict, it seems to have opened a pandora’s box of demands by various political parties including NDA allies like JD(U) and Apna Dal to conduct caste census to enumerate the actual population of backward castes and extending reservation to them. Opposition parties like BJD too have demanded caste census to identify the Socio Economically Backward Sections (SEBCs).

The underlying demand also include the need to review the 50 percent cap on reservations at present based on the findings of caste survey if at all conducted. Clearly, the motive here is political and the parties want to cultivate new vote banks and consolidate their political future. They also see this as an opportunity to make a dent on the OBC base of BJP especially in north India. The clamor for inclusion of more and more number of castes into the OBC category will become shriller in the coming years , something we have seen in states like Tamil Nadu. This will widen the hiatus between the so called forward castes and so called backward castes, eliminating any possibility of social amity and blurring of caste distinctions. We need to take a pause and ask, do we need such corrective measures which create new forms of discriminations? This vicious cycle shall never end in that case.

Recently, the Central Government also extended the reservation to OBC students in medical education. While corrective mechanisms based on affirmative action is a pre requisite to further the agenda of inclusive governance by eliciting the participation of all ( Sabka Saath Sabka Vikas) in the national development, the state also needs to deliberate on ways and means other than reservations. The goal of social justice remains unfulfilled without an accompanying thought on economic justice. In a caste stratified society like India, such decisions are seen primarily through a political lens. Politicians and political parties keep on playing caste cards to win elections and thus keep alive the issue of caste based reservations. Take for instance, the demand for removing the 50 percent cap on reservation. It would go against the numerically inferior upper castes and would fuel discontentment and anger amongst the youths – reviving the memories of anti Mandal agitations that rocked the country in the early 1990s. This has the potential to rupture the social fabric of unity by creating discord and disaffection in the society. Also, the continuing debate surrounding reservations occlude the larger debates on merit and equity. Urban middle class has remained the backbone of BJP since its inception till date. They are aspirational and industrious and expect tangible economic mobility rather than social goods like reservation. The popular perception is being created that BJP is treading the same path which the regional, caste based socialist parties have done in the past – creating an endless cycle of reservations for overt political capital.

While no one is ostensibly against reservation and one does recognize the historical injustices meted out to the backward castes, the time has come to move one step ahead of reservation and think of economic development, empowerment of all sections of the society equitably, state of the art infrastructure, fast tracking reforms through massive job creation, skill development of youths, leveraging the standards of education , digitization and improving the social indicators of the country. Enlarging the size of the pie will ensure bigger share for all the members of the society rather than squeezing the existing one. If we want to envisage a New India on the occasion of 75th Independence Day, we need to chart a path for our country that understands the grammar of good governance by bringing every citizen on an equal footing rather than empowering few by disempowering many. New India needs to break the shackles of caste hierarchies and yearn for a post caste socio economic order rather than reinforcing them by creating newer forms of entropies. This is what the father of Indian Constitution Dr BR Ambedkar had also emphasized upon when he repudiated village centric socialist economy and stressed on an urbane, scientific and industrialized society which would gradually eschew the rigid, ascriptive identities in favor of a rational, progressive and egalitarian national identity.

PINGAKSCHYA PATTANAYAK
Previous articleRVS Mani’s ‘DECEPTION – A Family That Deceived The Whole Nation’ – An Explosive book launched by Bollywood Director Vivek Agnihotri
Next articleHow IT Industry is shaping the future of India?
- Advertisement -