NOAKHALI HINDU GENOCIDE OF 1946 – A SAGA OF BLOOD AND BETRAYAL 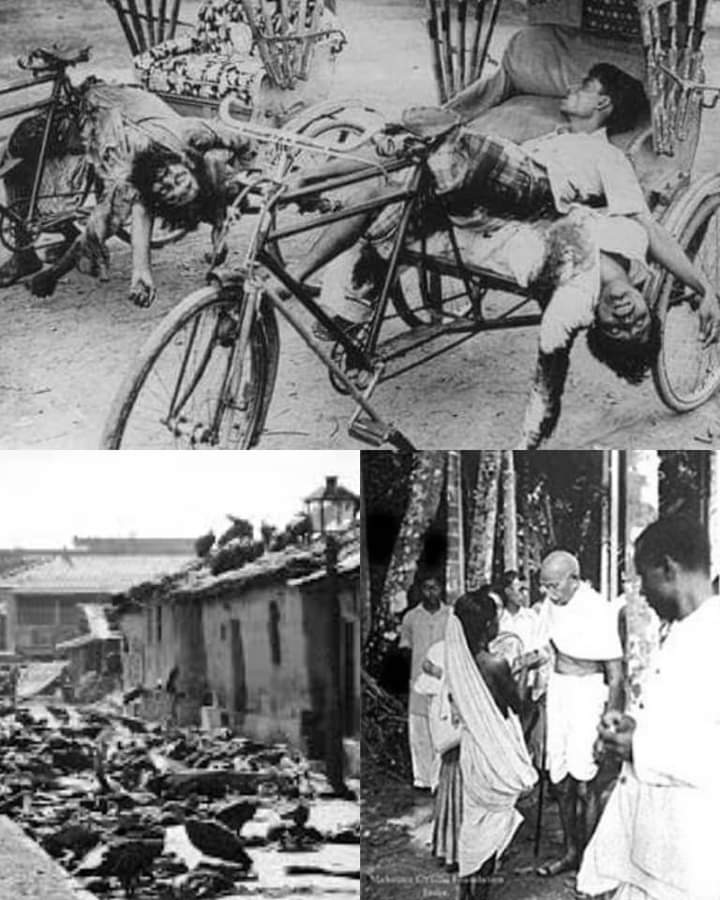 NOAKHALI MASSACRE, OCTOBER, 1946
The Noakhali Hindu Genocide was one of the most grotesque cases of ethnic cleansing of the 20th century. In a concerted pogrom, huge groups of bloodthirsty radical islamic marauders butchered 1000s of hindus of Noakhali (currently in Bangladesh), gangraped the women and forced the rest to convert to Islam. A vast number of hindus were compelled to leave their home, hearth and property, earned through their hardwork over many years, behind to flee and take refuge in the hindu majority western part of Bengal and other parts of India.

The relationship between the hindu and the muslim communities were very delicate and hanging loosely on an extremely thin thread since the first partition of Bengal was effected in 1905 under the supervision of the then Governor General of India, Lord George Nathaniel Curzon. The official reason for the said partition of Bengal was stated by the British colonial rulers as administrative ease. However, it is a foregone conclusion that the real reason for the same was to drive a wedge between the hindus and the muslims to stall a united and strong resistance towards British rule which was continuously on the rise in Bengal. The British rulers had pushed forth the idea into the minds of the Muslim leaders and intellectuals of the community that the division of Bengal would help the muslim majority areas to gain in administrative and financial power. That idea remained in the minds of most of the community members even after the partition was annulled in 1911, which resulted in a few outbursts and skirmishes between the two communities off and on.

The battle line between the two communities became more distinct in August, 1946, when the Great Calcutta Killings took place as a part of Jinnah’s Direct Action Day call to enforce the demand for a separate Islamic state, Pakistan, to be carved out of India. The said pogrom was engineered by none other than the then Prime Minister of undivided Bengal, Hussain Shaheyd Surhawardy, who came to be known as the ‘Butcher of Bengal’ due to the hindu massacre engineered by him. In a rare event of the protector turning into the aggressor, thousands of hindus in Calcutta (now Kolkata) were killed, maimed and tortured in order to terrorize them so much so that they are compelled to escape from the city.

Suhrawardi’s intention was to make Calcutta free of hindus so that the he can realize Jinnah’s dream of merging Calcutta with Pakistan. The pogrom continued for 3 days, from 16th to 18th August and on the 3rd day, Suhrawardi’s terror mongers met their match in a valiant hindu called Gopal Chandra Mukherjee aka Gopal Pantha, who owned a meat shop in Central Calcutta. Gopal Pantha and his army of hindu youth called Bharatiyo Jatiyo Bahini not only resisted the Islamist butchers but also took the attack to their homes, killing them, though never touching their women. Suhrawardi was shocked because he never anticipated a hindu retaliation of this order as he always believed the hindus to be meek and submissive. A totally flabbergasted Suhrawardi immediately called for truce with Gopal Pantha, by sending his ‘peace’ emissaries to him. Gopal Pantha relented only when the Islamists lay down their arms and surrendered. However, he himself never surrendered his arms, even after Gandhiji requested him to do so.

The radical Islamists were extremely unhappy at the scathing and unexpected defeat handed out to them by the hindus of Calcutta and kept on planning revenge on them over months, even if it were elsewhere, not necessarily in Calcutta.

There was ample provocation from all quarters to organize another big blood bath of the hindus. The elections of 1937 saw the Muslims emerge victorious in assuming provincial power in Bengal.. However, it goes without saying that, all along, the Hindu community had been in the driver’s seat as far as academia and economy was concerned. They also owned enough property earned by their sheer hardwork, relegating them to the position of landlords. All this accompanied by constant provocation by the Muslim League leaders sowed seeds of hatred, insecurity and jealousy in the minds of the Muslim populace against the hindus causing them to pick up arms against the latter, forgetting the fact that the two communities had peacefully coexisted as neighbours and acquaintances for many years. The roaming minstrels of Bengal from the Muslim community also added fuel to the fire by constantly singing anti hindu folk songs thus instigating the community even further. This time around the anti hindu action began in the Eastern Part of undivided Bengal which subsequently merged with Pakistan post the partition of 1947 and is currently Bangladesh.

On 10th October, 1946, on the day of Kojagori Lakshmi Puja, when all the hindus were busy with the puja which is celebrated in almost every Bengali home hoards of radical Islamist marauders descended upon the unsuspecting hindus of Noakhali, East Bengal, mercilessly butchering them, holding their women captive, raping and converting them. The hindus were taken by surprise even more because most of these attackers were either their friends and neighbours with whom they had lived and shared their moments of happiness and sorrow with equanimity, over years – such was the extent of betrayal.
Estimates say that around 5000 hindus were killed but of course the number could be more. Thousands of hindu men and women were forcibly converted to Islam and forced to give a declaration that they had wilfully converted. A huge number of women were raped and forced to marry the Muslims. Around 50,000 to 75,000 hindus were evacuated in camps at Comilla, Chandpur and Agartala, Tripura. Another 50,000 were marooned in Muslim dominated areas under their strict surveillance and were forced to pay Jizya or protection tax to the Muslim League.

The hindu killing was well planned and concerted progrom engineered and executed by a rogue and terror monger called Gholam Sarwar Hossaini, who hailed from a Pir (Muslim cleric) family, in collusion with his associate called Kasem. The immediate provocation came with the looting of a bazaar in the Ramganj police station area after a provocative speech by Sarwar post the prayers.
The Islamist armies created by Sarwar and Kasem, known as Miyar fauz and Kasemer Fauz went on a rampage along with hoards of their community members from among the tenants of the hindu zamindars. They attacked the residents of Surendra Nath Basu and Rajendra Lal Roychowdhury, a former president of the Noakhali Bar Association and a prominent Hindu Mahasabha leader. Rajendra Lal Roychowdhury went down fighting to save his dharma and his prestige, a sacrifice which is compared to this day with that of Guru Govind Singh. His severed head was presented to Sarwar on a platter and his two daughters were gifted to the two trusted lieutenants of Sarwar. Such brutal killings were seen everywhere in every hindu home.

Freedom fighter, Lal Mohan Sen was also killed. Hindu houses were set on fire using petrol. The use of petrol in areas where there were no motor cars, for instance, the island of Sandwip, indicated the pre meditated nature of the attacks. Temples were burned down too. Some hindus managed to escape with the help of local muslims, who later occupied their property – the basic idea of these muslims in helping the hindus to escape was to occupy their property.

Gandhiji visited Noakhali, presumably to put an end to the blood bath. But his talks of peace, harmony and non violence didnot cut ice there. Later news reports were found which indicate that he quoted the local Muslims only saying that Hindus should surrender or perish.What was more shocking was the statement by the butcher of Bengal, H. S. Suhrawardy in this regard, who stated that rape of hindu women was natural as they were more attractive than the Muslim women, virtually justifying the rapes and massacre.

This incident has left an indelible impression in the minds of nationalist Bengalis, specially those from East Bengal even to this day and they keep recalling it whenever any tussle with the Muslims is witnessed, though most witnesses to the ghastly killings are now dead. However, the leftist liberal Bengalis downplay the incident and sing tunes of harmony and peace with the terror mongers.
However, let this day be that of remembrance and prayer for all those who laid down their lives to preserve their dharma, their dignity and honour and also a lesson for all on how to conduct themselves carefully in future.