Massive Expose – This is how ‘Gandhi Family’ usurped Lutyens Bunglows for decades. 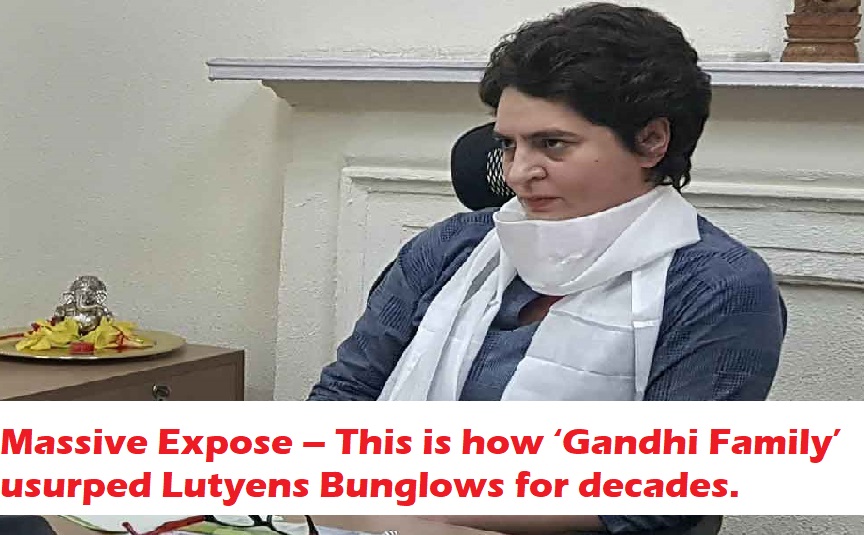 The Nehru–Gandhi Family is unarguably the most influential political family in India. It is an undisputed owner of India’s oldest political party, that is Congress, as various members have traditionally led the party. Three members of the family, Jawaharlal Nehru, Indira Gandhi, and Rajiv Gandhi, have served as the Prime Minister of India, while several others have been members of the parliament and Party presidents at different junctures.

However, this Family has a very strange distinction associated with their names, they are known for usurping lands and assets, which doesn’t belong to them. Yes, we are saying this with conviction, and we do have evidences to prove the same.

The recent case is related to Priyanka Vadra Gandhi, who was asked to vacate her bunglow, months after the withdrawal of SPG protection. The Union Government has issued an order for Priyanka Vadra to vacate the bungalow allocated to her in Lutyens Bungalow Zone.

Ministry of Housing and Urban Affairs has sent a notice and asked the Congress general secretary to vacate her government bungalow in Delhi by August 1. It said her allotment stands cancelled, and she owes Rs 3.46 lakh in dues to the government, which she has to pay to the Government. Priyanka and her family were allotted the Type 6B bungalow in 1997 as she was an SPG protectee at that point of time.

However today we have got a shocking news that Gandhi Family is using all sort of power politics and weird tactics to ensure their possession of Lutyens Bunglow intact, where they are already living since their birth.

A news published by Outlook Magazine, with subject “PM allows Priyanka Gandhi”s request to stay on in Lutyens” bungalow for some time”. This article suggests that Prime Minister Modi has agreed to a request to allow Priyanka Gandhi Vadra to retain the 35, Lodhi Estate Bungalow for some time. This article portray that PM Modi he has gone out of the way and shown large heartedness towards Gandhi family.

However, the moment Priyanka Gandhi Vadra saw this, she tweeted this and her tone was indeed furious and she denied making any such request to PM Modi to retain the bunglow.

However, she had no idea that her tweet might open the can of worm and may expose another hidden ‘Gandhian’ Way of usurping the Public land and possess that for decades.

Union Housing and Urban Affairs Minister Hardeep Singh Puri immediately retorted and replied with some facts that a senior Congress Leader indeed called him and requested him to allot the Lodhi Estate bunglow to some other congress leader, so that Priyanka Vadra can stay on.

Furious with Union Minister’s retort, Priyanka Vadra tweeted once again and this attempt was more embarrassing than the earlier one.

However it seems, Mrs. Vadra had little idea that what is coming in to expose her hypocrisy and shamelessness.

Satya Kumar exposed the hidden arrangement of Gandhi Family, the very tactics they use to keep their possession on Government Bunglows for several decades. He even shared the name of the Congress Leader who called him to give him a favour and keep the bunglow illegally under his possession.

Satya Kumar didn’t stop here, he exposed the shamelessness of Priyanka Vadra and slammed her for not vacating the bunglow for such a long time, and exposed her fake realisation.

This is how this Gandhi Family acts, they have usurped Government Land worth several thousand crores. Remember National Herald Case? They use the same tactics everywhere, and the moment someone call their bluff out, they start creating noise and portray if democracy is in a grave danger.

However, We would urge Modi Government to implement the policies with iron hand. Allocate the bunglow to deserving people, who hold some Government posts, Government should forcefully evict such non-political, non-government, non-relevant person from Government Properties. These properties belong to the Citizens of India, and should be allocated to someone who serve the country, not to someone whose only qualification is that her nose is identical to her grandmother.