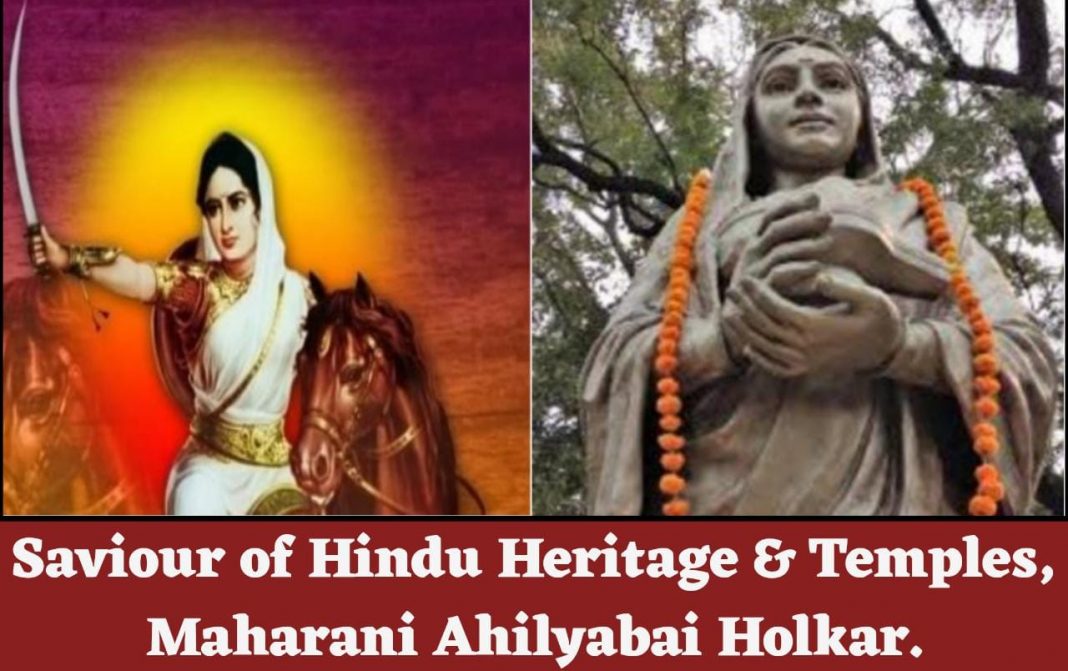 Modern day feminist claim that Women’s in India had faced the gender inequality since ages . But the fact is there had been many women’s who were way ahead of their generation . This time we will tell you story of one such brave , intelligent and remarkable women – Ahilyabai Holkar .
Born in 1725 to the Dhangar community , Ahilya was home tutioned to read and write by her father . Malhar Rao Holkar ,ruler of Indore , once saw her in a temple rendering service to the poor . He was so impressed by little Ahilya that he got her married to his son Khanderao Holkar at the tender age of eight.
Tragedy hit her in 1754 , when she lost her husband in the battle of Rajasthan. She wanted to be sati but Malhar Rao holkar convinced her that she is needed now more then ever and started training her in the war tactics and administration .
Unfortunately in 1761 , Malhar Rao holkar too passed away . The only successor ,her son too passed away in 1767. Now she was the only queen left after the death of all the male claimants to ascend the throne . Though few nobles objected for a queen to ascend the throne , she had full support of the Holkar army .
Devi  Ahilyabai was a prolific builder and patron of Hindu temples in Maheshwar and Indore. She also built temples at sacred sites outside her kingdom. From badrinath to Dwarka , omkareshwar to Puri , Gaya , Rameswaran every holy place in India had contribution by her.
The most notable was the restoration of the Kashi vishwanath temple , after 111 years of destruction by Aurangzeb.
She also contributed towards construction of hundreds of temples , dharamshalas , numerous ghats and wells for the welfare of the people .
Indore prospered during her 30-year rule from a tiny village to a flourishing city.
During her reign Malwa was not even attacked once by islamic invaders.Hence Malwa was a symbol of stability, strength and peace during her reign .
She turned her capital city , Maheshwar , into a musical , artistic and industrial centre . She also established the textile industry there , which is now the home for the famous Maheshwari sarees. Rani Ahilyabai court was open and accessible to all .
“Far and wide the roads were planted with shady trees, wells were made and rest-houses for travellers. The poor, homeless, the orphaned were all helped according to their needs. The Bhils, who had long been the torment of all caravans, were routed from their mountain regions and persuaded to settle down as honest farmers. Hindu and Muslim alike revered the famous Queen and prayed for her long life,” writes Annie Besant.

Ahilyabai broke another tradition when she married her daughter to Yashwantrao a brave but poor man after he succeeded in defeating the dacoits. A woman ahead of her times, Ahilyabai’s greatest sorrow continued to remain the irony that her daughter jumped into the funeral pyre and became a Sati upon the death of her husband, Yashwantrao Phanse.
Known for her wisdom and administrative skills. She left for heavenly abode on 13th August 1795. The journey was not easy for Rani Ahilyabai Holkar . Keeping her grief apart she never let her Kingdom to scatter like a pack of cards .
As a tribute to the great ruler, Indore domestic airport has been named Devi Ahilyabai Holkar Airport. Similarly, Indore university has been renamed as Devi Ahilya Vishwavidyalaya.Contribution of Ahilyabai for Hinduism will be remembered till ages.