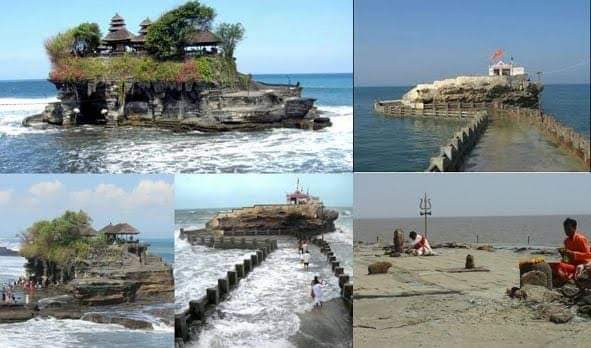 Nishkalank Mahadev Temple, located at Koliyak village near Bhavnagar, Gujarat is the best manifestation of the existence of an invisible power source, something which science has not been able to explain as yet.

The instant temple is unique in the sense that it is not a structured one and is located on a sea beach unlike the other temples which are found either on plane land or on plateaux or hills. This temple dedicated to Bhagvan Shivji, gets submerged under the sea during high tide, with only it’s crescent bearing the Saffron (Bhagwa) flag visible. During low tide, the sea moves away giving way to land for the devotees to walk towards the temple, on bare foot, from the shore.

Legend goes that the Nishkalank temple was built by the five Pandavas who were advised to perform a penance to appease Shivji to atone for their sins committed during the Kurukshetra war, that of killing their own relatives. Bhagwan Shivji, pleased at the dedication of the five pandavs, himself apoeared before each one of them in the form of 5 shivlingas along with his Vahan, Nandi the Bull. Hence the temple houses 5 Shivlings, placed at different locations, along with the idol of Nandi. Since Shivji helped wipe away the sins of the pandavas, the instant temple was named as Nishkalank Mahadev temple, to imply the Supreme Power being pure and perfect, who helps his devotees to atone for their sins.

The famous ‘Bhadarvi’ fair is held here during the sacred month of Shravan. The Bhagwa dhwaj is changed only during the temple festival by the royal family of Bhavnagar and it remains as such during the rest of the days of the year. The Bhagwa Dhwaj atop the temple has remained intact all along and no natural calamity of any degree of severity could damage it or make it fall off including the 2001 earthquake. That could just be the power of the Supreme someone and his command over nature and mankind which is beyond the realm of science. 🙏

Ranita Indic
Previous articleIs this a nefarious plan to bring back separatist sentiments in Punjab & grow unrest in the country?
Next articleTruckers: USA Liberty Symbol
- Advertisement -