Operation Allied Refuge,’: An effort to evacuate thousands of Afghan, who had assisted the US forces over the years during the war. 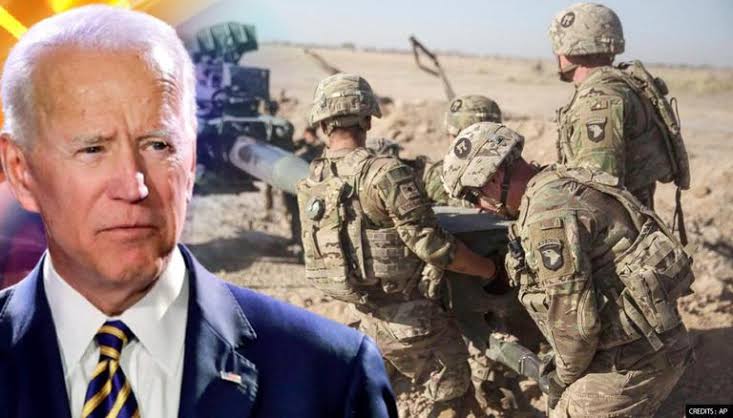 Last week, the Biden administration announced ‘Operation Allied Refuge,’ an effort to evacuate thousands of Afghan, who had assisted the US forces over the years during the war. The last US combat troops are expected to pull out of Afghanistan by the end of August, 2021 leaving the Government in Kabul to the mercy of the advancing Taliban backed by Pakistan! Few soldiers are guarding the embassy and it is likely that US embassy may be closed due to the deteriorating security situation in Afghanistan.

US President Joe Biden has authorised US$ 100 Million in funding for the “unexpected urgent refugee and migration needs” in Afghanistan, amid reports that at least one former translator for US troops has been beheaded by the Taliban. Biden overrode his own June 11, 2021, decision to commit an amount “not to exceed US$ 46 million” for the purpose, according to a White House announcement on Friday.

While the wording reflects the statutory requirements of the 1962 Law under which the funding is provided, Potus explicitly mentioned “victims of the conflict, and other persons at risk as a result of the grave situation in Afghanistan, including applicants for the Special Immigrant Visas,” making it clear that the money was intended to help Afghan translators and other local contractors who have worked for US and NATO forces in the country since 2001, and their families.

Another US$ 200 million worth of “services and articles from the inventories of the US Government agencies” will be directed to meet the same needs. Friday’s announcement came shortly after multiple corporate media outlets reported the story of Sohail Pardis, a 32-year-old former interpreter for the US forces in Afghanistan, who was beheaded by the Taliban in the Khost province.

Pardis was driving from Kabul to Khost on May 12, when he ran into a Taliban checkpoint. He was shot, dragged from his car, beaten and beheaded, media reported, citing local villagers who witnessed the gruesome death. Pardis had worked for the US military for 16 months, before he was dismissed in 2012 after failing a routine lie detector test. His application to be evacuated to the US under the Special Immigrant Visa program was denied on those grounds. US had also hired a large number of kids to collect local intelligence from ground.

President Biden announced that the United States will not meet the deadline set under the US -Taliban agreement to withdraw all troops by May 1 and instead released a plan for a full withdrawal by September 11, 2021. “It’s time to end America’s longest war,” he says. The remaining 3,500 troops in Afghanistan will be withdrawn regardless of whether progress is made in intra-Afghan peace talks or the Taliban reduces its attacks on Afghan security forces and citizens. NATO troops in Afghanistan will also leave. Biden says Washington will continue to assist Afghan security forces and support the peace process. The Taliban says it will not participate in “any conference” on Afghanistan’s future until all foreign troops leave.

Canada’s involvement in Afghanistan had expanded dramatically since it first participated in the International Security Assistance Force (mandated by the United Nations in late 2001). Canada continued to support stabilisation, development and humanitarian efforts in Afghanistan, providing a total of US$ 3.6 Billion in international assistance since the year 2001. Canada has focused its assistance on the security sector, education, health, as well as human rights and the rights of Afghan women and girls. Canada joined the US led mission in Afghanistan in 2001 with many troops initially based in the provincial capital of Kandahar. Its combat role ended in 2011 when the country shifted its focus to training the Afghan army. Canadian soldiers left in 2014. Canada announced plans Friday to resettle Afghans who aided the Canadian military and the country’s embassy and could face danger because of their work, as the U.S. military withdrawal from Afghanistan nears completion and the Taliban mounts offensives to regain territory. These rehabilitee warriors may first move to Halifax and then move westward.

Canada’s “path to protection” will be open to Afghans with a “significant and enduring relationship” with the Canadian Government, although officials did not elaborate on how that would be defined. Those eligible, they said, could include interpreters, locally engaged embassy staff members, as well as a host of other locals who assisted the war effort such as cooks, drivers, cleaners, security guards and their families.

The program will include “special immigration measures that will offer a path to protection in Canada for those at risk due to their work,” the statement said. “Lives hang in the balance here,” Canadian Immigration Minister Marco Mendicino told reporters, “which is why we are taking timely and decisive action. Canada will do right by those who did right by us.” Mendicino said the government appreciates “that there is a need to act quickly, and that’s for sure.

Plans to rapidly relocate hundreds more Afghans who worked for the British military and UK government, mostly as interpreters, have been announced. Including family members, more than 3,000 Afghans are expected to be allowed to settle in the UK, joining 1,300 who have already done so far. The decision comes amid fears for their safety as international troops prepare to leave the country. Defence Secretary Ben Wallace said it was “only right” to accelerate plans. He added that those being relocated were those that might otherwise “be at risk of reprisals” from the Taliban.

The issue has been a concern since British forces ended combat operations in Helmand in 2014 – with troops who served there being among the most vocal in their support for measures to protect those who assisted them during their deployment.

Earlier schemes applied strict criteria on who could apply for a new life in the UK and considered the Afghans’ length of service and precise roles – for example favouring interpreters who worked with British troops on the frontline in Helmand for more than a year. But under new government policy, any current or former locally employed staff who are assessed to be under serious threat to life will be offered priority relocation to the UK – regardless of their employment status, rank or role or length of time served.

The German military concluded its withdrawal from Afghanistan after almost two decades, finishing Germany’s deadliest military mission since World War II. “Our last troops left Afghanistan this night after almost 20 years and are on their way (back) home,” German Defence Minister Annegret Kramp-Karrenbauer said in a statement. “This is the end of a historic chapter, of an intensive mission which has tested the Bundeswehr and in which the Bundeswehr has proven itself in combat.” It was in Afghanistan that Germany’s military fought the first ground battles since the end of World War II.

Over the last years, Germany had the second largest contingent of troops after the United States in Afghanistan, with around 150,000 soldiers deployed over the past two decades, many of them serving more than one tour in the country. Fifty-nine German soldiers died in Afghanistan, 35 of them killed in combat or as a result of militant attacks, making it Germany’s deadliest military mission since World War II. Wrapping up the operation, Germany said it would have to redeploy the equivalent of around 800 containers of equipment such as armoured vehicles, helicopters, weapons and ammunition as the drawdown began. The multinational camp in northern Mazar-i-Sharif led by Germany had been reinforced with troops and mortars, ramping up security for the duration of the withdrawal to guard the base against attacks by the Taliban, running insurgency and now control wide swathes of territory.

Earlier the plan was to relocate these indirect fighters to the neighbouring countries but later it was found that Taliban was being hand in glove with Pakistan and Turkey was planning to take over the air force base vacated by the US air force. India did not evinced too much interest in giving temporary visas before the final destination of Afghanis. These indirect soldiers fear for their life.

Taliban is supposed to take revenge even on the foreign shore!