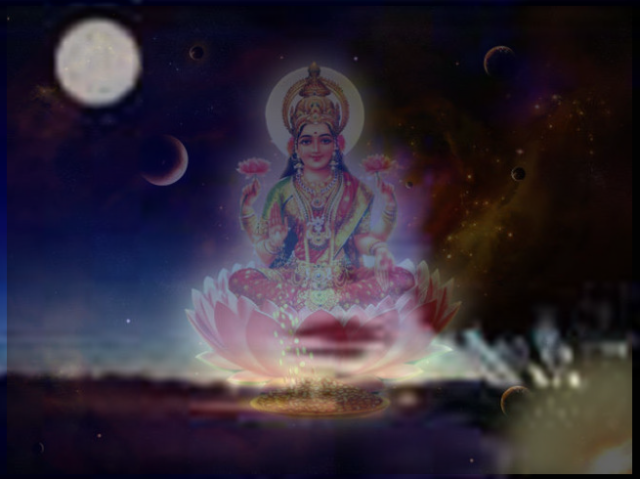 Kojagori Lakshmi Puja is a part of the Autumn festivities which began with Durga Puja. The festival marks the end of the harvest season and is celebrated as a gesture of gratitude towards Maa Lakshmi, the goddess of wealth, for providing a bounty of crops during the harvest season. The banana boats used for the puja are symbolic of the prosperous trade and commerce being carried out by the sea faring businessmen of Bengal in the yesteryears.

It is celebrated on a full moon night known as Kojagori Purnima or Sharad Purnima (outside Bengal). Besides being a hindu religious festival, Kojagori Lakshmi Puja signifies the cultural roots of Bengal, primarily East Bengal. The said Puja was earlier observed only by the hindus hailing from West Bengal but now it is celebrated in most Bengali homes.
The name Kojagori means ‘Who is awake’. The significance of Lakshmi Puja on this day lies in the legend that Maa Lakshmi visits each household to note who is awake and is involved in a game of dice to usher in good luck. She is believed to reward those who manage to remain awake. Traditionally the puja is performed at dusk, with the onset of purnima or fool moon. However, these days, the said custom of performing puja at dusk is seldom followed in a vast majority of households. Only the community pujas have been found to follow this tradition.

Though Maa Lakshmi is worshipped throughout the year, during the Sankranti festivals and during Diwali too, Kojagori Lakshmi Puja is the most popular celebration in the hindu homes of Bengal. Maa Lakshmi is worshipped by some in the form of a murti, a clay disc or ‘shora’ by some (a feature reminiscent of the culture of rural Bengal), while others use a photo of the deity to worship her.
The offerings or prasad which are a must are five types of fruits e. g,apple, pomegranate, mausambi, pomello (batabi lebu). Along with these, the puffed rice balls (murkis), black sesame balls (tiler naru), coconut jaggery laddoo (narkel naru) are a must. The bhog or the platter offered to Maa constituted of luchi (puri), suji halwa, tomato chutney and payasam.

The rangoli or alpona made on this day are a feast for the eyes – the primary motifs used for the alpona are the white owl (vahana of Maa Lakshmi), the footprints of Maa Lakshmi and dhaner chora or paddy husks.  The traditional clay pot or ghot with a vermilion made swastika on signifies the presence of the goddess in it and hence is necessary to use.
The other offerings include :

3.      Panchamrita or a mixture of five food items made with a mixture of ghee, honey, jaggery, curd and milk.

4.      Madhuparka for offering honey to the deity, which is a combination of ghee, honey, curd and milk.
After offering arti with panchapradeep or the lamp with five faces and offering of flowers (pushpanjali), the puja is completed. The devotees offer the puja with hope and prayers of financial prosperity and stability so that their home and hearth remains secure throughout the year.