Knowing the real Heros of our nation & the need for rewriting Indian History. 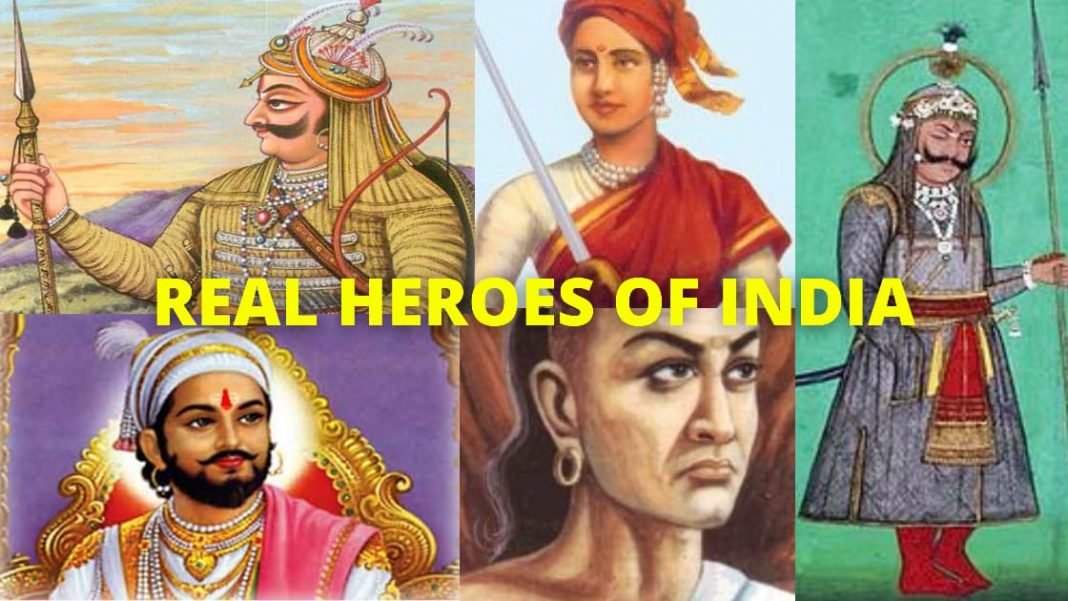 Let us begin with understanding what History is! History is our collective identity evolved over a period of time that signifies our character, hence, shapes our future. So obviously, History is a very important part of our present life and has impact on our future also.

History is based on perspective. An account of a victim would surely differ from the account of a perpetrator. So, it is for us to decide the perspective with which we wish to teach history to our children. History has to be fact based, inclusive, should bring in different perspectives to the readers and make people learn out of the mistakes of the past and induce a sense of pride in them for whatever their earlier generations accomplished and attempted.

But sadly, our history as being taught now is unimaginably distorted! The problem begins with the British in the Pre-Independence period and persists strongly even after our independence under the dominance of our Marxist Historians.

Many facts have been twisted, others subdued, and many others have been selectively exaggerated and largely the motive has been to portray a divisive picture of the country and negating unparallel acts of valor done by our ancestors. Also, History is not only about who ruled whom, but also about the exceptional knowledge and prosperity which are ancestors attained while the rest of the world was primitive. But ironically, that too has been very purposely subdued by our Marxist historians by telling history to our children in such a way that it induces a very strong feeling of hatred towards their own culture. It is because if the true History of India is told to our children then they will feel pride over it and that’s the exact same thing that they don’t want to happen.

Besides, this mindset is being patronized by the ruling Governments too by appointing hardcore Marxist Historians on the senior posts of the I.C.H.R and N.C.E.R.T. They were the ones who wrote the history, the way they liked and nobody was there to challenge them. Now let’s understand another aspect of the problem, that if we delay the  transition period of telling the true history by just a year, then several lakh student will pass out, thinking that they are the descendent  of the Aryans, and the Dravidians are some other people whom they drove away. This shows how critical the urgency in India is of rewriting the true history of it’s past.
Here I would like to share some examples from my class 7 textbook of History-:
On the very first page of the book some very unusual things referred to be spoken by Alberuni about Hindus are quoted “The Hindus do not pay much attention to the historical order of things; they are very careless in relating the chronological succession of things, and when they are pressed for the information and are at loss not knowing what to tell say, they invariably take to tales telling”. This is very insulting for Hindu Dharma and it also gives the wrong impression on the children also. It is to promote fake things about our culture that has no base.

While mentioning about Kashmir in the same book,  Zain-ul-Abidin is mentioned as the greatest ruler of Kashmir and even the ‘Akbar of Kashmir’. This is so absurd as Lalitaditya Muktapida, who expanded the kingdom of Kashmir from Iran to Tibet and from present day Kashmir to present day Madhya Pradesh finds no place. His empire was even bigger than that of the Mauryas and the Mughals in their peak time. He was the one who stopped the Muslim invasions of Bharat for a long time.
Again there is the most shocking distortion, which is about Aurangzeb. The textbook says that:
‘Aurangzeb was a simple and God-fearing Muslim. Unlike other Mughal Emperors, he had a very simple lifestyle. He never wore costly robes or used gold or silver vessels. He even sewed caps and copied the ‘Quran’ to earn money for his use. Due to his simplicity he was called a ‘Zinda Pir’, a living saint. As a ruler Aurangzeb was short-sighted and he gave up Akbar policy of tolerance. He became very unpopular when he introduced ‘Jaziya’. The policies of Aurangzeb pushed his empire to a decline.’

So, as we can see here the textbook says that, he [Aurangzeb] was a very simple man and summarizing his cruel part in merely four sentences. It thus gives an impression that Aurangzeb was a just ruler and his only unwise decision was to introduce the Jaziya tax. But actually, all of us know that how cruel ruler Aurangzeb was. He gave the Farman of the destruction of all the temples in India, killed so many Hindus and meted out atrocities unthinkable, and the Jaziya tax that the book speaks about, was meant to be payed only by the Non-Muslims.

Another illustration from the same book
is about Tipu Sultan, known as the ‘Tiger’ of Mysore. The book extraordinarily emphasizes upon portraying him as the humble and just ruler which is simply not the case as Tipu Sultan invited the grandson, of Ahmed Shah Abdali to attack India, and also, he wrote a letter to a general of his that ‘‘You know I had a big achievement over Hindus a few days ago, I was able to convert 3,00,000 Hindus to Islam.’’ And that letter is on record and they were written by Tipu Sultan himself. (These distortions are just a few of many.

Now, what we should also understand is that, in the modern world an equally important aspect is that the method of telling history is not just limited to books, but other mediums like movies, media etc. which attract the public more than the books. In this context, the Hindi film Industry too plays a very crucial as well as the critical role. But unfortunately, they are failed in their job by producing completely biased narrative of History, disconnected with our true ethos which malignantly affects the young and fertile minds of this country. One can go on the internet and find hundreds of Movies totally insulting our Dharmic past and especially Hindu Gods and Goddesses. As a result of it, people have withered away from their culture, they shame it and mock it anywhere you see.

So these problems can be dealt by the way of retelling genuine and factual History to the people of this country. The Ramayan and the Mahabharat which are thousands of years old, are a part of our glorious history that is why called “Itihasas” and they teach us the moral basis of life, diplomacy and Dharma, so the government should also teach this History in schools and colleges so that the youth of India can benefit from it, and also this will help in clearing many misconceptions about these great Indian epics. And as everyone knows that, how Important Sanskrit is in the development of the brain, so if we start teaching the epics in Sanskrit then it will also benefit the children mentally too.

In the end, I would like to conclude by saying that, that if the TRUE History of India is taught to the Youth of this country, then, we can overcome all the socio- political problems affecting India, and we can build the eco-system which nourishes the core Indic values.