Killings of innocent continues in the name of Farm Law protest. 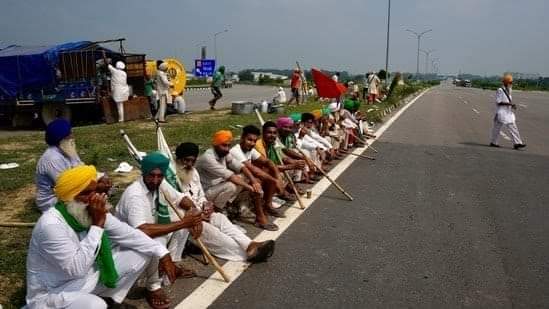 Even the sky seems to be crying at the departure of Maa Durga back to her abode in Kailash. The environment is gloomy and dark – not metaphorically but in real. Why won’t it be?

Two days back, on Ashtami, Maa’ murti was desecrated and thrown into the river by a pack of wolves, the ‘Jabons’, in Comilla, Bangladesh and her devotees hounded and killed. Today, on the auspicious occasion of Vijaya Dashami, another devotee of Maa Durga, a 35 year old Sikh labourer, a father of three little daughters, Lakhbir Singh from Tarn Taran, Punjab, was butchered in the most grotesque of manner, that would put even the ISIS to shame. The barbaric creatures kept on deriving sadistic pleasure while chopping him in pieces, halal style, even when he was still alive, wreathing & seething in pain and the ghoulish creatures kept shooting videos of the killing. Once done, they hung his dismembered body up a police barricade, in beastly joy, to terrorize and intimidate the rest of the country. The fault of this youth, according to them was that, he defied/disrespected the Holy Guru Granth Sahib. He had no criminal records and no political background whatsoever.

No prizes for guessing who these creatures are. As per news media reports, they are the Nihangs, who have been serving as the first line of defence for the fake farmers agitating along the Singhu border. They weren’t even allowing the cops to visit the area. But the Haryana Police stormed into the bastion created by these terror mongers and have already began action. Hope these barbarians are meted out with the same treatment as they did to the poor Lakhmir Singh. Maa Durga should not spare them.

Though a #fake farmer ‘luminary’ was denying any connection with this killing, it goes without saying that only a fool, naive or a liberandu will believe him. Their role in the entire farcical movement is well known – a movement steeped in such acts of rape, killings, arson and defiling of our national flag on Republic Day. They have proved to even worse than the radical Islamist terrorists in performing such activities. Besides, how can the leaders of the movement be absolved of such a crime? A few days back, their main leader, Tikait Dacait endorsed and justified mob lynching, in a press conference with Yogendra Yadav in tow. The consequence was today’s ghastly killing.

Will the pseudo liberal elites, who were crying wolf and baying for Ashish Misra’s blood post the Lakhimpur Kheri incident, now do even one percent of the same against these satanic killers, the guards of the fake farmers? Will any Puja Committee display their protest against it? What say Bharat Chakra Puja organizers with a pandal made of shoes? We do know now all have consumed fevicol.

Shouldn’t all political parties representatives, who are supporting and funding this movement (Congress did confess doing the same), in Parliament and various legislative assemblies resign due to this barbaric act by their co ‘agitators’? Or is morality applicable only for the BJP? And if you scream ‘conspiracy’ in this, we would say the same for the Lakhimpur Kheri incident, which surely is your conspiracy. Getting your Virats/Jhatkas/Raitas to singularly blame the BJP won’t help as these moles of yours stand exposed..