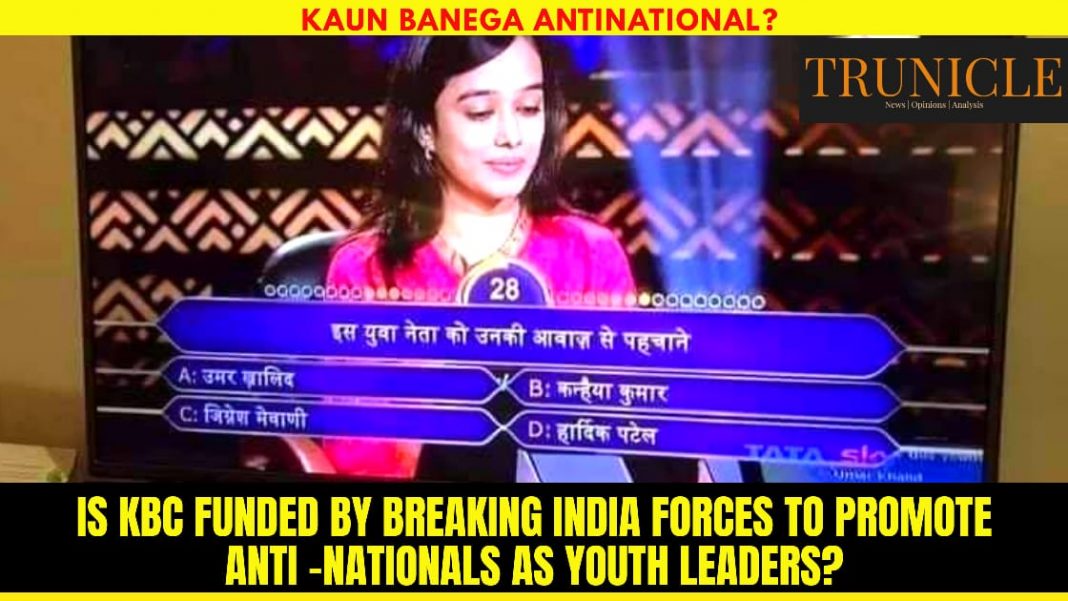 What is the definition of a youth leader? And who are youth leaders in India at present, according to Kaun Banega Crorepati telecast on Sony Entertainment Television?

Umar Khalid, former JNU student and son of an ex member of SIMI, a banned terrorist outfit was arrested under Unlawful Activities (Prevention) Act (UAPA) for his role in riots, which claimed more than 50 innocent lives in North East Delhi on 24 and 25 the February.

On 20 February in Amravati, Umar Khalid delivered speech in which he said, “when President Donald Trump visits India, Muslims should ‘show’ the visiting US president that the people of India are fighting against the ruling party of India.” In his 17 minutes long speech, Umar Khalid   further spewed the venom, when the Muslims did not revolt against the Ayodhya judgement by Supreme Court, the government took it for granted that they can bring any law against Muslims. Inciting the crowd further, Umar Khalid said, “people should show the government its ‘AUKAAD’ and take to the streets to throw it out. Thereafter, CAA will go, then the NPR and NRC, eventually the government would also fall.”

In the chargesheet filed by Delhi Police, it is mentioned that role of Umar Khalid’s role is deeply rooted in larger conspiracy behind the riots in North East Delhi. The chargesheet further gives detail Umar Khalid had told Tahir Hussain not to be concerned about the funding for the riots as Popular Front of India (PFI) would provide the funding as well logistic support. Not to forget Umar Khalid is the same JNU student leader, who had shouted “Bharat Tere Tukde Honge, Insha Allah Allah.

Kanhaiya Kumar shot to national limelight when he also allegedly participated in anti India slogan, Bharat Ki Barbadi Tak Jang Rahegi Jaari in February 2016. Police arrested Kanhaiya Kumar over the charges of sedition in an event organised by JNU students to commemorate the second anniversary of the hanging of Parliament attack convict Afzal Guru, the hanged terrorist, at JNU campuses.

What are leadership qualities in Kanhaiya? He can abuse the Prime Minister of the country. He can curse the existing government. He can denigrate Judiciary by supporting a terrorist, hanged by Supreme Court of India. He can  protest against the constitution and then after getting released on a bail, he can say that he believes in constitution.

Hardik Patel resorted violence and arson for agitation seeking reservation for Patidar community. Hardik Patel is responsible for riots, anarchy, huge destruction of properties worth Crores of Rupees and killings of 14 innocent people and injury of more than 200 people.

According to KBC, leadership qualities are

This is how Sony Entertainment Television run anti India agenda so cunningly via Kaun Banega Crorepati.

So what would be the next set of questions in KBC? Would Sony Entertainment Television present Burhan Wani, the dreaded terrorist of Hizbul Mujahideen as Human Right Activist?

Who is the best Human Right Activist among the four terrorists.