Intensified Action on illegal encroachments in Delhi – Why Aam Aadmi Party is so Agitated? 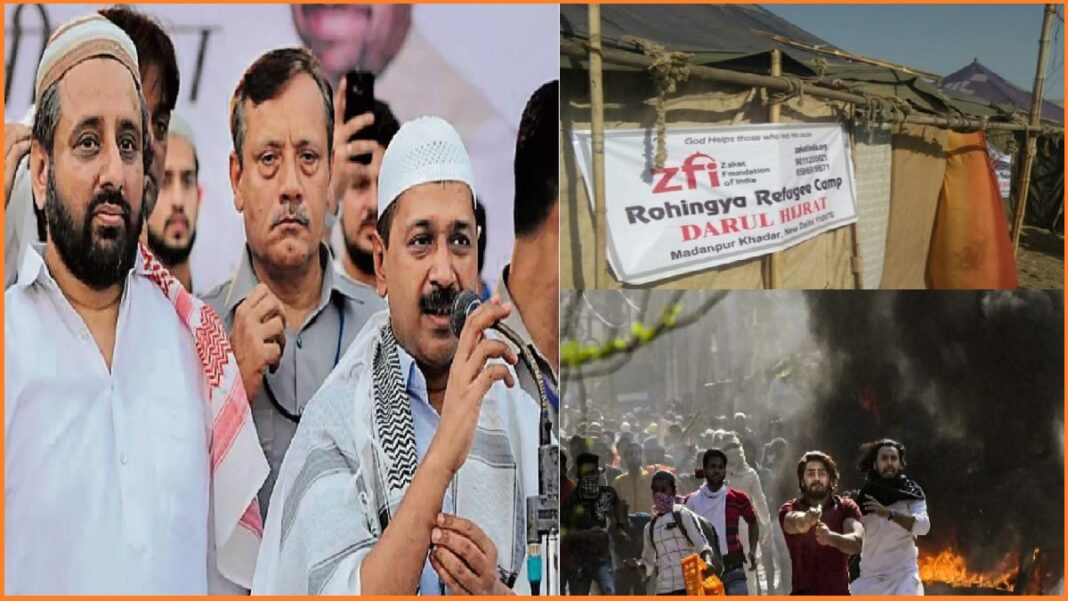 Ever since the action against illegal encroachments began in Delhi, politics has also started gaining momentum. On the day of Hanuman Jayanti in Jahangirpuri, the devotees were attacked by hardcore Islamic elements, after which the Delhi Municipal Corporation squad swung into action to remove the illegal encroachments, which caused a massive political uproar.

The Aam Aadmi Party seems to be very aggressive in this matter, and its leadership has come out openly in support of illegal encroachers and is challenging the central government and the Delhi Municipal Corporation.

The Aam Aadmi Party is alleging that the BJP-ruled municipal corporations have started the campaign ahead of the elections, while BJP leaders while being at the helm of the civic bodies for the past 15 years, took bribes to allow unauthorized construction and settlements to be built across Delhi.

AAP has made an outlandish claim while criticizing the BJP. The AAP said the BJP’s bulldozers campaign will make 63 lakh people homeless in Delhi. AAP has demanded that elections to the new municipal board be held early, and those who come to the new office bearers will decide whether to take any action against unauthorized constructions and settlements.

A visibly agitated AAP spokesperson Saurabh Bharadwaj said that before breaking the houses of people, bulldozers should be run on the houses of all BJP leaders, councilors, and MCD officials who took bribes to allow unauthorized construction, settlements, and encroachments to take place in the city. He said that first of all, bulldozers should be run at the house of Delhi BJP President Adesh Gupta.

AAP MLA Amanatullah Khan was also arrested for allegedly disrupting the work of the squad that went to remove encroachments in Madanpur Khadar. After that, AAP has literally gone berserk and has started attacking BJP aggressively. Delhi Deputy Chief Minister Manish Sisodia has written a letter to Union Home Minister Amit Shah urging him to immediately stop the anti-encroachment proceedings.

He has termed the action of removing illegal encroachments as a “Bulldozer Conspiracy” to destroy 63 lakh houses and said that 60 lakh houses in Delhi are in Kutcha Colony and slums, while 3 lakh houses are in pucca colonies. The BJP’s message to these 63 lakh families is clear – either give money or be prepared to be devastated by bulldozers.

Although the figures tell a different story, Delhi’s population is just over 2 crore, and the number of houses is certainly below 63 lakh. Considering Sisodia’s claim, is MCD going to demolish every house in Delhi?

Now what the Deputy Chief Minister is trying to show by giving wrong figures, only God knows. Yesterday, Delhi Chief Minister Kejriwal called a meeting of all the MLAs to discuss the action taken against the anti-encroachment drive.

Why Aam Aadmi Party is so Agitated?

When the anti-encroachment proceedings took place in Jahangirpuri, the left parties opposed it, they approached the Supreme Court. However, they did not get much respite from the court. Past that it was the AAP that suddenly started showing aggression. The biggest reason for this is the potential loss to the AAP’s core vote bank.

If you analyze, you will find that the primary vote bank of the AAP is the people living in Kachcha Basti and the Muslim people. Delhi’s areas such as Jahangirpuri, Madanpur Khadar, Jamia, Shaheen Bagh, Badarpur border, etc., are surprisingly high in the population density of Muslims. It is also said that Bangladeshis and Rohingya Muslims have illegally settled here.

During the Jahangir Puri riots many Muslims were arrested, most of them were Bengali-speaking people, who are said to be illegal Bangladeshis or Rohingyas. We witnessed the same phenomenon during the Shaheen Bagh blockade, vandalism in Jamia, and the subsequent Delhi riots that occurred after the Islamic protest against the Citizenship Amendment Act (CAA).

Delhi CM Kejriwal, Deputy CM Sisodia, and Amanatullah Khan have traditionally been supporters of these people. Some time ago, the Uttar Pradesh government had removed encroachments from 2 hectares of land occupied by Rohingya Muslims in the Madanpur Khadar area. The value of this land was more than Rs 150 crore, but it was the AAP party and its leaders who were opposing this action.

AAP leaders have conspired to settle Rohingyas and Bangladeshi Muslims on about 5 acres of land in the Madanpur Khadar. They have provided accommodation, water, and electricity to these illegal people.

In Kalindi Kunj and nearby areas, these illegal Muslims have created havoc for the locals. The local RWAs and social groups have given written complaints to the police several times, it has been raised that these people sell drugs, commit crimes, and do many other objectionable acts, but no action has ever been taken, as AAP leaders always come to their rescue.

Even BJP’s MP Mahesh Giri has also informed the Delhi Police several times on the issue and requested them to take action, but each time Amanatullah Khan defended these illegal people. The AAP government has also provided them with government documents like Aadhaar cards and ration cards and using them as a vote bank.

Delhi BJP president Adesh Gupta also accused the Aam Aadmi Party and said Manish Sisodia was worried about the anti-encroachment drive as it was the AAP that was patronizing these illegal Bangladeshis and Rohingyas. The Aam Aadmi Party uses these people to carry out riots and other anti-social activities, and also protects them from legal proceedings.

That’s the reason why, when the MCD squad went to demolish the encroachments in Shaheen Bagh, Amanatullah Khan was at the forefront of the protesting mob. After stiff protests, the squad had gone back without much action. The surprising fact here is that the MCD is running an anti-encroachment drive in other areas of Delhi also, but AAP does not oppose it. It comes into the picture only if proceedings happen in a Muslim-dominated area.

When the anti-encroachment squad of the Delhi Municipal Corporation came to remove illegal structures in the Madanpur Khadar, Amanatullah once again came in front of the bulldozer, but this time the Delhi Police was ready, and immediately took him into custody and sent him to Tihar Jail.

After this move, there is an uproar in the Aam Aadmi Party, and all their leaders have started making aggressive statements. They seem to have lost a lot, let’s see what happens next.