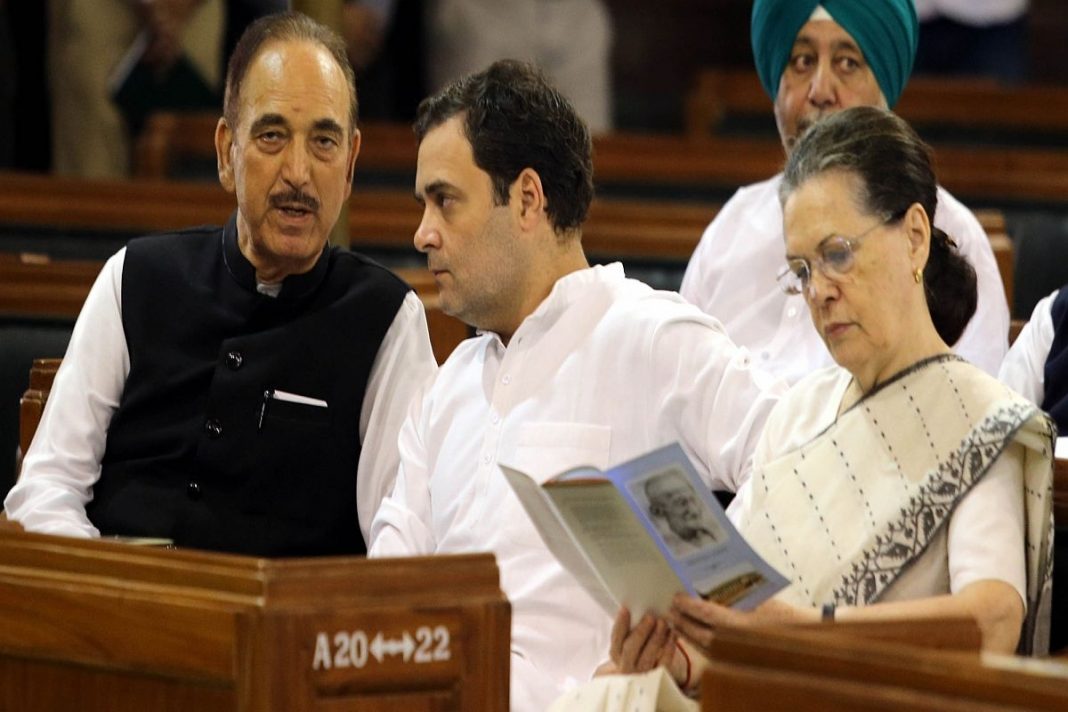 Ghulam Nabi Azad has come out in open critiquing the way Congress is appointing party office bearers without any proper elections. This is a direct attack on the party and its top leadership (read: owners of Congress i.e. Gandhis) and the lack of inner party democracy in the party. He alleges that “There is a huge disconnect between the people and Congress leaders at the district, block and state levels. The party’s connect with the public should be a continuous process and not only during elections. There is an urgent need to overhaul the party structure by conducting elections from block to district and state level.” The last line in the statement is eye catching. This is the core problem in the party – office bearers are not elected by members of the party, but are appointed by somebody at the top.

Given the structure of AICC and CWC, Gandhi family and their close confidantes have gamed the system very efficiently. They start by appointing their yes men and yes women at all levels to ensure AICC and CWC elections are conducted in a desired manner. The ultimate objective of those AICC and CWC elections are to ensure that someone from Gandhi family is unanimously elected as the party president. This can only happen when their trustworthy people are appointed in AICC and CWC who would then in turn vote for one of the Gandhis as the party president.

This must start with the murder of inner party democracy in original Congress that fought for independence of India. Two glaring instances of how one man forced his will against the wise judgment and will of the majority are well known.

First: Netaji Subhash Chandra Bose was democratically elected as the President of Congress in 1939. Interestingly, Netaji Bose defeated Mahatma Gandhi’s candidate Pattabhi Sitaramayya by 205 votes. Mahatma Gandhi retorted that this was his defeat and not Pattabhi Sitaramayya’s. Going against the majority decision and undermining inner party democracy, Mahatma Gandhi forced and coaxed all members of Congress Working Committee, except Netaji Bose and his brother Sarat Chandra Bose, to resign. This finally forced Netaji Bose to resign from Congress. This was the first properly documented instance of tyranny of minority led by Mahatma Gandhi prevailing over the will of the majority.

Second: Election of 1st Prime Minister of Independent India. Sardar Vallabhbhai Patel was elected as the Prime Minister of Independent India with 12 out of 15 votes, while Nehru didn’t win even one vote. This was despite Mahatma Gandhi announcing his preference for Nehru even before the elections. Then too, Nehru lost very badly. None of the PCCs voted for Nehru as they preferred Sardar Patel for PM instead of Nehru. Again Mahatma Gandhi went against the will of the majority and imposed his tyranny of minority to ensure Sardar Patel withdrew, paving way for Nehru to become the first Prime Minister of India. Had the will of the majority been accepted, Nehru wouldn’t have become the PM.

This is how inner party democracy in original Congress was murdered twice, even before India became a democracy.

Post independence, Nehru’s stranglehold over Congress strengthened. Early death of Sardar Patel also created a void in Congress and eased Nehru’s control over the party. An eminent Gandhian and a foremost freedom fighter like Chakravarti Rajagopalachari quit Congress in 1959 over disagreements with Nehru. It would be interesting to study and find out how many freedom fighters got sidelined and marginalized in Congress, post independence. It would be even more interesting to research on how many children and grandchildren of Gandhians and freedom fighters became powerful politicians and office bearers of Congress after the demise of their parents. The story of Congress post independence is the tale of sidelining and marginalization of freedom fighters and Gandhians to create Nehru’s fief that his daughter and then his grandson and descendants would inherit.

This creation of Nehru’s fiefdom was not an easy task. Many tall leaders and senior freedom fighters that remained in Congress were opposed to Indira. She was expelled from original Congress for violating party discipline. This is when Indira split the original Congress and created Congress (Indira) with handful of her sychopaths and yes men and yes women. Since then this newly created Indira Congress remained a fief of Indira and later her descendants. Party positions were filled with loyalists, instead of holding free and fair elections ensuring capable leaders – who were mass leader in their own right and had trust and confidence of grass root level party workers got elected. This is how Indira Gandhi set the stage for a family run Congress and sowing seeds of sycophancy, cronyism, and “ji huzori” culture in Congress.

The problem in Congress that Ghulam Nabi Azad and 22 other leaders are complaining about as reasons for failure of Congress are not recent. Seeds for the same were sowed more than 80 years ago. Congress is now harvesting fruits from the seeds it sowed long ago.

Muslim man Rafiq hoisted Pakistan flag on his roof of the house in Kushinagar, Uttar Pradesh