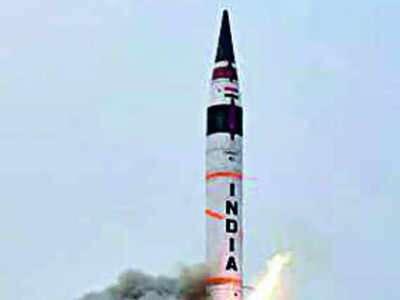 India successfully test fired Agni – V ‘nuclear capable ballistic’ missile recently. The 5,000 km range missile was launched at 7.50 pm from the east coast of India at a DRDO facility. The missile is capable of striking a designated target more than 5,000 kilometers away with nuclear warhead carrying capacity of more than 1 ton.

It can hit the most northern parts of Mainland China and other parts of Asia, Europe and Africa. Entire China is covered by Agni V and it’s highly precise ‘multiple entry’ warheads which can be nuclear. They can hit at 24 Mach or 24 times the speed of sound making all air defenses useless.

India is a peace loving country and the successful test of Agni – V, is in line with India’s stated policy to have “credible minimum deterrence” against bullies, rogue nations, both state and non-state thugs and aggressors who may mistakenly undertake misadventure against India. Unlike other missiles of the Agni series, Agni – V is the most advanced having new technologies incorporated with it in terms of navigational direction and guidance, warhead and engine.

Agni V is three-stage solid propellant Inter Continent Ballistic Missile (ICBM) indigenously developed by the Defence Research and Development Organisation (DRDO). It is about 17 meters long, 2 meters wide and has launch weight of around 50 tonnes.

As one of the permanent members of the UN Security Council, China is said to be willing to question India’s successful launch of the Agni-V ballistic missile at the UNSC, which occurred on Monday. With a range of 5,000 km, the missile can cover most parts of China and is capable of carrying a nuclear warhead. The missile is perceived to give India a long-range strike capability and hence “balance out” China’s military muscle.

Indian and Japanese media has speculated that the purpose of this Agni-V intercontinental ballistic missile is to counter China, because Agni-V can reach most parts of Asia and Europe. While India is among the handful of nations with (arguably) ICBM capability, the next generation of the missile, Agni VI, under development, is expected to have a range of around 8,000 km and more and our missiles can reach any part of the globe.

The missile, uses a three-stage solid fueled engine, was first tested in 2012. With its 5,000 kilometre range, the missile comes into the category of an inter continental ballistic missile (ICBM).

“The successful test of Agni – V, is in line with India’s stated policy to have ‘credible minimum deterrence’ that underpins the commitment to ‘No First Use’” of nuclear weapons. Spokesperson of the Chinese Foreign Ministry, Hua Chunying, said that “the UN Security Council has explicit regulations on whether India can develop ballistic missiles capable of carrying nuclear weapons.”

Probably hoping for India to respond immediately, she did not specify if China would actually invoke these rules. Following China’s reaction, External Affairs Ministry Spokesperson said that “India’s strategic capabilities are not targeted against any particular country. India abides by all the applicable international obligations and hopes that all other do the same.

India’s strategic autonomy and growing engagement contributes to strategic stability.” Hua Chunying said that “China is willing to work alongside regional countries including India to maintain the long-lasting peace, stability, and prosperity of the region.” In fact, China and India have reached a consensus that both are not rivals for competition, but partners as two significant developing countries and emerging economies. “China always maintains that preserving the strategic balance and stability in South Asia is conducive to peace and prosperity of regional countries and beyond.”

The Agni-V missile was launched from Wheeler Island off the Odisha coast. It is approximately 17 metres long, weighs about 50 tonnes, and has a very high accuracy Ring Laser Gyro based in Inertial Navigation System. The missile can be deployed at a short notice due to its enhanced mobility. Agni – V is said to be the strongest land-based missile systems today.

Once the Agni-V is inducted in the Indian military, the exclusive club of countries with intercontinental ballistic missiles will be expanded to include India, alongside with the US, Russia, China, France, and Britain.

We are proud of our scientists and engineers!