INC ,Degrading the Temple of Democracy 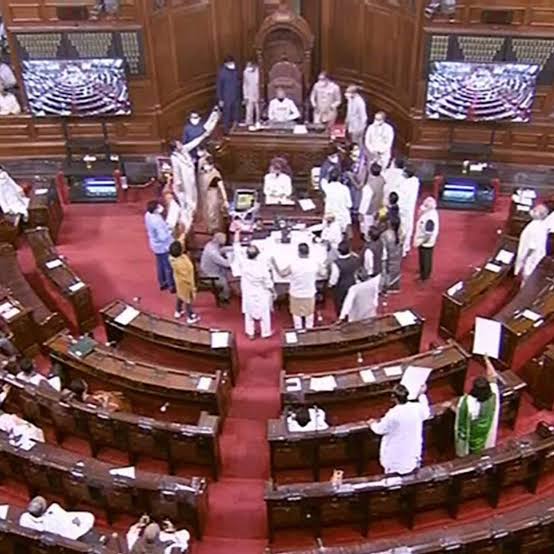 On August 10, 2021 Congress leader Pratap Singh Bajwa stood on a bench, like a pole dancer in the most ugly way, in Rajya Sabha House, when the august house was in the monsoon session, while raising slogans against the three agriculture laws, passed by the same house, approved by the Hon’ble President and notified by its administrative Ministry – Agriculture, enacted last year and threw heavy files with great force like a javelin thrower, getting motivated from the gold medalist Neeraj towards the Hon’ble Chair or the Presiding officer of the ‘House of Elders’. Congress MP Pratap Bajwa justified his unruly behaviour in the Rajya Sabha and said he is not sorry.

This is a runaway government who is continuously ignoring the critical issue of 3 Farm Laws. We will keep our (Congress) eyes and ears open on their misdeeds. Unfortunately such drama was never ever enacted before, in the House of elders.

Sound of the thud could be heard in the video recorded in the House, which has gone viral on the social media platforms. Mind you this video was not leaked or circulated by the Union Government or the Rajya Sabha TV, which covers the debate live from the Rajya Sabha floor of the house.

The well of the ‘august house’ is a sacred place, also called as the ‘Temple of Democracy’ and Hon’ble members of the house, all of whom are allocated a unique seat number, which helps them during the time of vote count, have to speak from their own seat and based on the seat number the Hon’ble Chair can identify the Hon’ble member and his name. Special software was designed, developed, tested and implemented in just a month to help the Chair identify the Speaker, during the period when Hamid Ansari, was made the Vice President and since he was not that political person, he had trouble to identify the Hon’ble members.

Many years back around 2004 – 2005, when the author was the Head of IT in the India Parliament, he took the initiative of creating a wired environment in the Rajya Sabha when late Shri Bhairon Singh Shekhawatji was the Chairman of the Rajya Sabha. The cameraman of this august house are all very experienced and they are given strict instructions never to show such pandemonium ium during the live broadcast, which is beamed for the world to see, think and ponder the debates of this house on national issues.

Another hooligan of the Aam Aadmi Party, an ex-cinema ticket black marketer Shri Sanjay Singh of Sultanpur was seen sitting on the table of the Rajya Sabha and was video tapped shouting slogans against the union government opposing the farm laws passed in this august house an year back.

The same party has been supporting the Kisan rally being choreographed by Dakait Singh errrr Tikait Singh at the Delhi Ghaziabad border, directly and indirectly by providing free wi fi and hot spots at the protest sites, free water tankers and washroom and toilet facilities and free electricity connectivity to the temporary structures erected by the so called Kisan netas. Various ‘langars’ of the Gurudwara were seen serving hot meals to the anarchists. It appeared to many that they were the sons-in-law of the Delhi Government.

This entire sloganeering and acts of the ‘pole dancing’, by the Congress MP was video tapped on his mobile by another notorious MP of the AITMC Party from the Rajya Sabha well and uploaded through the wifi network available in the Rajya Sabha well as well as its galleries. Now both houses have wifi connectivity and only NIC wi fi and BSN, mobile connectivity works and other mobile connectivity has been jammed for security reason. At another location her mentor, CM of West Bengal was creating an ‘artificial flood; in front of friendly media and press, until someone from the neighbourhood posted 2 pictures of Didi speaking against the central government and step motherly treatment meted out to the state government in dealing with flood relief in the state. Such leaders are the shame of Modern India.

Rajya Sabha Secretariat provides this mobile phone to all the Hon’ble members and talk time from it’s own fund.

Rajya Sabha is the ‘house of the elders’ and supposed to be august house, where all intellectuals of the nation sit ‘peacefully, I wonder’ and ponder on the nation’s burning issues in the most animated way and present before the nation the possible solutions.

Recently, it was reported that another TMC stalwart and so called ‘bhadralok’ Santanu Sen snatched papers from the Hon’ble IT Minister Ashwini Vaishnaw and torn it to pieces on the floor of the house of the Rajya Sabha. He was suspended from attending Rajya Sabha for the remaining session from the date of suspension by the Rajya Sabha and notified by the Secretariat.

In another incident, Congress MPs threw papers at the Speaker Sir Chair in the Lok Sabha by coming in the well of the house and showing placard and sloganeering and created ruckus over the Pegasus controversy.

Rajya Sabha Chairman Shri Venkaiah Naiduji broke down while reading his speech on yesterday incident of MP unruly behaviour!! Hon’ble Vice President got really emotional on how MP’s conducted themselves and converted the tables of the Rajya Sabha as dance floors of ‘nauch’ girls as if this well was meant to celebrate Mulayam Singh’s birthday at Safai Vidhan Sabha constituency. Even some MP’s were seen clapping and I could see Mr. Ketkar, the spin doctor of the Gandhi Durbar from Maharashtra encouraging the culprit. Clapping rom the fellow opposing members could also be seen and heard as encouragement as nations’ prestige takes a backseat.

On last count, the MP has refused to apologise and this act of hooliganism will be likely to be discussed in the ‘ethics committee’ of the Rajya Sabha.

Such acts must be severely punished by the Hon’ble Chair. Both houses have their own security hierarchy and set of bouncers, politely named as marshals and the Chair must use the services of these marshals profusely and more frequently and throw out the unruly and ill-behaved members of the parliament and suspend them immediately for the rest of the parliament session. As much Modi government is called as ‘fascist government’, and the government must act and act hard.

From the acts, it appears the frustration of the congress is growing by leaps and bound, since congressman cannot remain out of power and die like fish out of water.

They are not paid for not attending the parliament.

They must also be removed from the select committees of the parliament. Their air india flying coupons must be immediately withdrawn, talk time suspended and pension must be proportionately reduced by a formula.

Punishment meted out to these modern day monarchs must be strict, serious and harsh.

The Chair must not swear such unruly elements in their next Rajya Sabha or Lok Sabha term.

The Indian National Congress, INC, run and operated by the Dynasts are on the last leg of their journey. In the evening just before all creatures go silent called death, there is lot of squawking and screaming then the Dead silence. This is that late evening of life party!