Decisive leaders across the world being targeted by Left eco system by creating movement of riots, loot and anarchy. 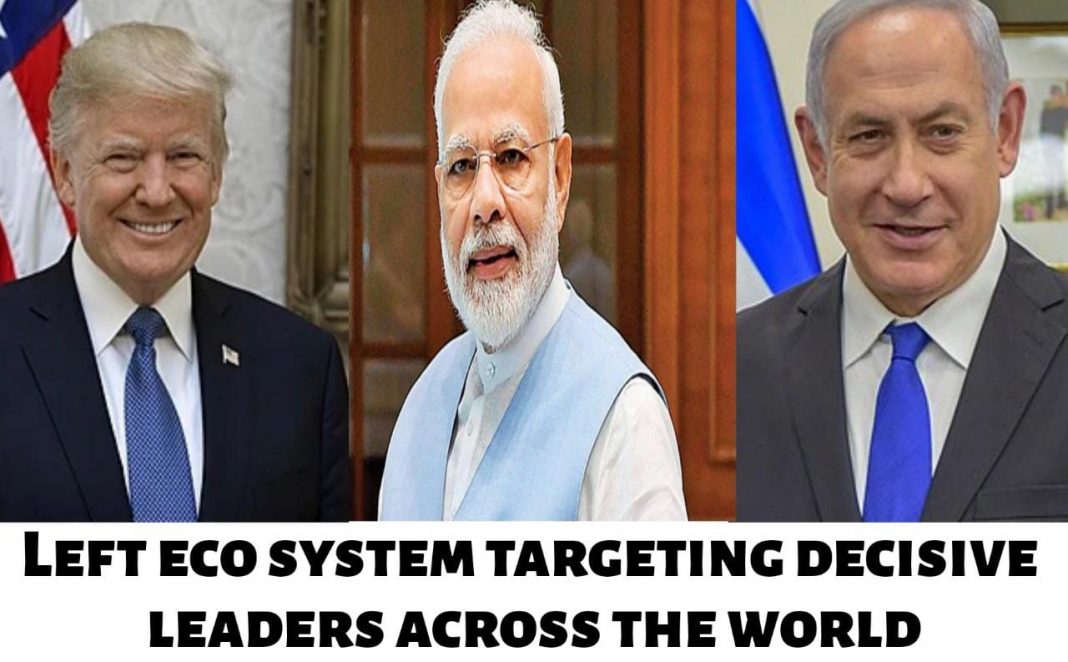 Can violence, anarchy, loot, destruction of public properties and attack on policemen pave the, way for opposition party to POWER in a democratic country? Can inflicting wounds, on nation, in the name of movement make sure a thumping win for opposition party in next election?

Opposition party in United States of America was able to undermine the Trump government through Black Lives Matter (BLM) movement. And rigged election hit the final nail in the coffin to oust Donald Trump in 2020 United States Presidential Election. Alarmingly, the same formula is being applied in every democratic country to throw the powerful and decisive leader with nationalist party in power, be it United States, India, Israel, Australia or France.

Unfortunate killing of 46 years old black man, George Floyd, while being arrested for using a counterfeit bill by a white police officer with Minneapolis Police Department on 25 May 2020 caused a nationwide Black Live Matters (BLM) movement in United States. Black Live Matters (BLM) movement claimed they stood against inequality and injustice and police violence. But there is difference between what they claim to stand for, and they do actually do in reality. As a matter of fact, the BLM movement committed unprecedented violence, loot, anarchy, murder, destruction of public properties and attack on policemen. The communists and far left rioters associated with ANTIFA didn’t hesitate to punch a New York woman and strike her with plank of wood, when she was pleading with rioters to spare her business. When her husband tried to save her, he was also beaten. Was such crime perpetrated in BLM movement a battle against inequality, injustice and police violence?

In India, after Shaheen Bagh sit-in demonstration of anti CAA protest, from 11 December 2019 to 24 March 2020, which led to break out anti Hindu riots in North East Delhi on 23 February 2020 claiming more than 50 innocent lives, it is tractor rally of Farmer Protest, which left no stone unturned to provoke Delhi Police to fire one bullet so that they can commit blood bath after desecrating National Flag on Republic Day. The so called farmers attacked and injured around 400 policemen. Is it really ‘Farmer Protest’ or the goal is to topple the Modi government in Center?

There are such uncountable disturbing questions, which openly prove that intention of so called Farmer Protest is not to amend the Farm Bills, but to topple the democratically elected government. However, riots and anarchy can provide the oppositions a chance on platter to grab the power and topple the present government in next election is doubtful in India.

Decisive leaders are subjected to face the same hostile situation across the world.

Israel: Israel PM, Benjamin Netanyahu has been targeted by weekly protest since last six months in Jerusalem. Protestors are demanding him to step down over corruption charges. Ex commando, Netanyahu repeatedly won election on promise of making Israel safe, secure and prosperous.

France: France Emmanuel Macron, once the blue-eyed boy of left eco system, was projected as eyesore by Left liberals after he took stern action against Islamists, who perpetrated terror activities in his country.

Australia: Australian PM Scott Morisson rejected growing demand to remove statues of white leaders amid Black Lives Matter (BLM) movement in the country refusing to be bullied by left eco system. Thereafter, he came in radar. Morrison was targeted with tomatoes and fake blood and his car was vandalized by protestors demonstrating to raise awareness of Australia’s refugee detention in October 2020.

American billionaire and philanthropist George Soros openly attacked PM Modi at the World Economic Forum meeting at Davos in January 2020. Time magazine blatantly called PM Modi India’s Divider in Chief” in its May 20, 2019 international editions. Dark Forces of Left eco system have aligned not only against India but against decisive leaders across the world to create civil unrest in the form of communal riots across the world.

Left eco system is so strong that it can be gauged from the fact that Twitter permanently suspended the account of US President Donald Trump. Facebook deleted a post by Israeli PM Benjamin Netanyahu and suspended a chatbot linked to his account.

Answer of these questions explain why decisive leaders with nationalist parties at power are being targeted across the world.