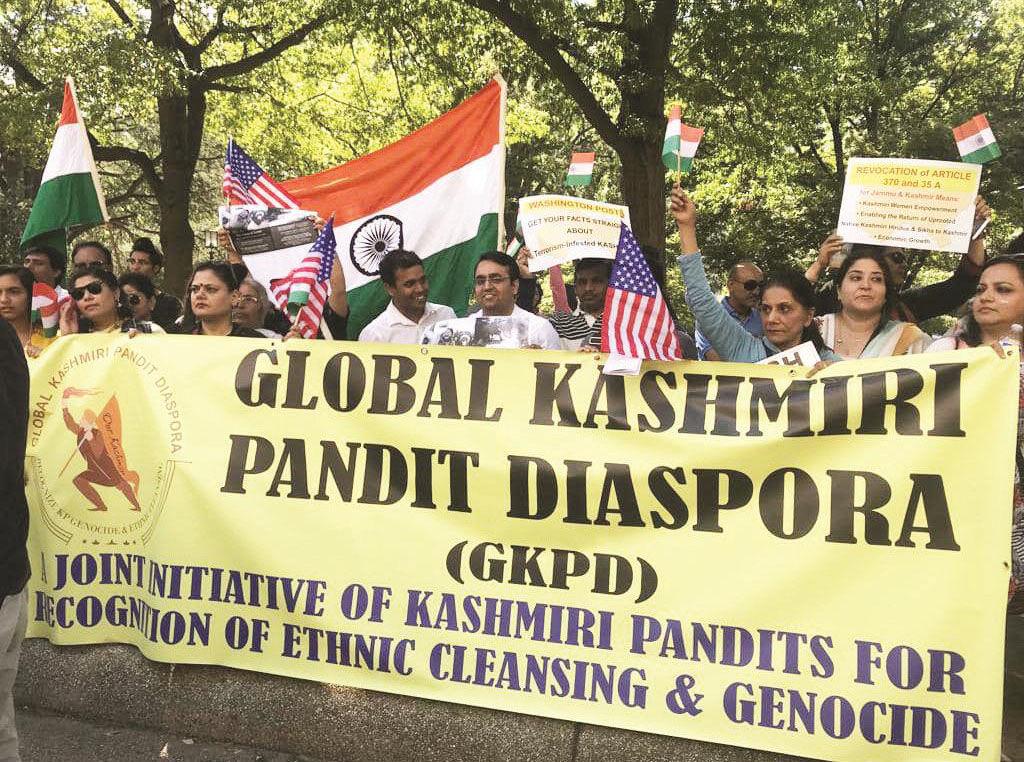 December 5,2021
Congressional Reception of Indian Americans from the Kashmiri-Pandit
community
(For Release to the Press- Capitol Hill Event, December 2nd, 2021)
Global Kashmiri Pandit Diaspora is hosting the private screening of ‘The Kashmir
Files ‘a movie directed and written by award winning Director, Vivek Agnihotri and
produced by the award-winning actor, Pallavi Joshi. The movie is based on the
Kashmiri Pandit genocide and ethnic cleansing. The movie depicts the humanitarian
angle of the challenges that Global terrorism brings and disrupts communities and
make them rootless. It also highlights human pain and sufferings. The movie is being
screened in sixteen cities in USA.
Global Kashmiri Pandit Diaspora (GKPD) in partnership with US India Security Council
Inc convened a congressional reception of Indian Americans from the KashmiriPandit community at the US Capitol Hill on December 2, 2021. The objective of the
congressional reception was to celebrate and honor the success stories of their
resilience and the strength despite being the victims of ethnic cleansing and
genocide.
The evening started with remarks from Congressman Raja Krishanmoorthi, US
States Representative (D-IL 8th District). Congressman Krishnamoorthi thanked the
Kashmiri pandit community for all their contributions globally but also in the United
States. He said that The Kashmiri pandit community is one of the most successful
Indian American community. “The challenges that you have faced in the past and
overcoming those challenges make all other challenges pale in comparison. When
you are running for your life, when you are dispossessed of possessions you know
the real meaning of life. You know how to appreciate it, cultivate it and nurture it
wherever you are and make sure everybody remembers their heritage and roots.”
Dr Surinder Kaul, Co-founder of GKPD and co-host of the evening, a Kashmiri pandit
himself said “Kashmiri Pandits have always been the Ambassadors of peace and
growth. The tenets of the community -universal brotherhood, benevolence, caring
and sharing and pursuit of knowledge made them to contribute towards upliftment of humankind in this civilised world.They never reciprocated violence with violence, hate with hate

This piece of their genocide and ethnic cleansing has remained
hidden from the world and will create awareness about the impact of global
terrorism on human lives.
Congressman Andy Barr, United States Representative R-KY 6th District emphasized
on India US relationship and contributions of Indian Americans .The fact that we
have the QUAD now and this partnership with India and the United States, Japan
and Australia will emerge as a powerful alliance. He thanked the Indian Government
and the Indian people for that friendship.” He was gracious in offering his offices to
highlight issues of the persecuted Kashmiri Pandit community.
A statement received from Senator Mark Warner, Member of the United States
Senate, D-VA was read by Surinder Kaul. Senator Warner extended his warm
greetings to all the guests at the reception. Some of the excerpts from his statement
were “I am honored to serve as a co-chair of bipartisan Senate India Caucus which
is one of the largest country caucuses in the United States Senate. Our aim is
deepening United States India partnership. I remain optimistic about the United
States India relationship, and I continue to believe we can make great strides
together. As two of the world largest democracies and with the incredible Indian
American population that contributes so much to our culture, commerce and
community in this country it is critical for us to deepen and broaden the existing
partnership and friendship.”
Surinder Kaul thanked President of US India Security Council Ramesh Kapur, who
was the co-host of the event and provided logistic support for this reception.
Vivek Agnihotri an award-winning filmmaker from India in his keynote speech talked
about Indian civilization of oneness that emerged from the sacred land of Kashmir
and the immense contributions from Kashmir in the field of arts, aesthetics, music,
literature. He emphasized that destruction of Kashmir is the destruction of
knowledge, and the world should know what humanity means.
Award winning actor Pallavi Joshi made everyone in the room very teary eyed when
she shared the real-life gruesome incidents that were shared by Kashmiri pandit
community with them during their US tours. She walked through the genesis of ‘The
Kashmir Files’ and the intense research and testimonials involved in the making of
‘The Kashmir Files’