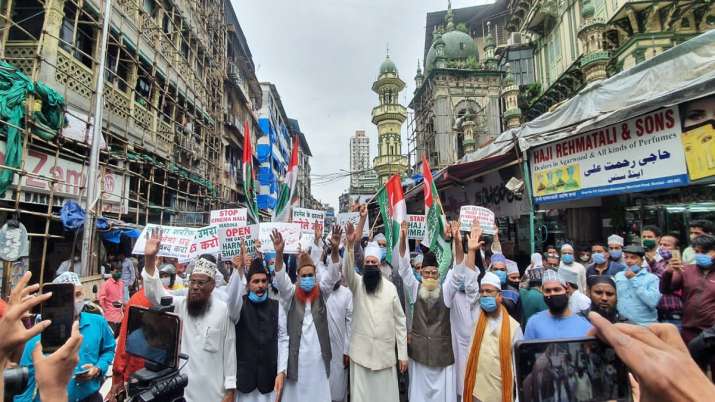 In 1947, British India was partitioned into the modern Dominion of India and the Dominion of Pakistan, the latter of which included northwest India and part of eastern India. Indian nationalists felt that following the departure of the British from the Indian subcontinent, Pakistan would destabilize and reunite with India; both the British, as well as the Indian National Congress thus thought it would be best for the British to leave sooner. On the other hand, Muhammad Ali Jinnah of the Muslim League wished to delay the departure of the British as he felt that it would allow the newly created state of Pakistan to receive its share of joint assets.

Many people (Hindus) are not aware that Ghazwa-e-Hind means to fight a war toward prophet Mohammad. It guarantees (as they claim) heaven and 72 Hoors for all Jihadists and Islamists under this dormant scheme. Ghazwa-e-Hind is a notorious prophecy mentioned in some so-called “good” hadith predicting a great battle in India between Muslims and Hindus, resulting in conquest by the Muslim warriors of the entire Indian sub-continent. The conquest will supposedly occur before the end-times and create an Islamic caliphate resembling the social order that existed at the time of Prophet Muhammad by imposing Islamic Sharia.

Jinnah thought that the Indian Muslims might have blended themselves well with the Hindus and its temples, so he lead the creation of Pakistan on the hatred against the Hindus. Mullahs of Pakistan brainwash everyone on the pretext of the creation of Pakistan by Jinnah for Gazwa-e-hind. They want to pillage and destroy the Hinduism.
Salafism is rooted in Wahhabism, which was founded by Ibn Abdul Wahhab of Najd. He developed his own ideas on Islam and began to resent the common Orthodox practices of Muslims of his time which included celebrating Mawlid (birth of the holy Prophet (SAAW)), visiting shrines of Sufi Awliya (holy men), seeking a means to God (waseela), and considering God to be present in his creation as the soul is present in the body. According to the Ottomans, Salafism/Wahhabism was a British ploy to spread a Protestant version of Islam to divide the Muslims as Europe was divided on

Catholic-Protestant lines.
Since Muslims around the world have historically travelled to Makkah for the Hajj pilgrimage, it was normal for them to meet Muslims of various backgrounds. Shortly after Wahhabism first arose, several Indian thinkers met the Saud tribe and were influenced by the teachings of their clerics. They adopted Wahhabi/Salafi beliefs and began to spread it to India.

An early example was S. A. Barelvi who led a campaign against the Sikhs. They remained an insignificant force until the establishment of Darul Uloom Deoband which was established approximately 10 years after the fall of the Mughal Empire in 1867. They adopted Wahhabi theology and mixed it with Hanafi legal practice. This was the beginning of the establishment of a South Asian version of Wahhabism/Salafism. This ideology would be called Deobandism.
The beliefs of the “Barelvis” is not something new. This was simply a response to the growing influence of Wahhabism/Salafism/Deobandism in South Asia. Ahmad Raza Khan defended traditional Sunni beliefs and practices and defended the Muslim culture, traditions and values of South Asian Muslims. Ahmad Raza Khan was supported by many scholars of the Hejaz, Ottoman Empire, and Al-Azhar. He defended traditional Islamic understandings of Tawheed, roles and attributes of Prophets, Tawassul/Waseela, and Sunni Islamic methodology. In reality, it can be said that there is no such thing as a Barelvi ideology, rather it is traditional Sunni Islam that was defended by Ahmad Raza Khan and his supporters.  Khan and his movement opposed the Indian independence movement due to its leadership under Mahatma Gandhi, who was not a Muslim.

The Muslim League mobilized the Muslim masses to campaign for Pakistan,[63] and many of Khan’s followers played a significant and active role in the Pakistan Movement at educational and political fronts.

Raza Academy is a radical Muslim  fundamentalist outfit in Maharashtra. The organization publishes Sunni literature concerned with the thought-school of Ahmed Raza Khan Barelvi. The organization is located in Mumbai, and Muhammad Saeed Noori is its founding secretary.
Raza Academy was accused of the Azad Maidan riots. The court and government asked them to pay for 3 crore property damages. On 11 August 2012, to condemn the Assam and Rakhine riots, Raza Academy organized a protest rally in Mumbai. There were reports from intelligence that there had been provocative messages going around via SMS in Mumbai. A day before the demonstration, police were warned that Friday prayer and gathering had urged a lot of people to turn up for protest. Raza Academy which had organized the protest had earlier assured the Mumbai Police that only 1500 people will turn up.But on the fateful day, around 15000 people assembled at the Azad Maidan and the crowd swelled to over 40000 people.Police Commissioner Patnaik said the protest turned violent around 3 pm when some members of the crowd began showing “provocative photos” of events in Assam. Rioters soon started torching vehicles, damaging buses and pelting stones towards policemen.Three OB vans and a police vehicle were set on fire. And the stone pelting resulted in the damage of a BEST bus, two four-wheelers and five two-wheelers. Amar Jawan Jyoti memorial, which is a war memorial dedicated to the fighters of the 1857, First Indian Freedom Struggle, was desecrated by the rioters.

Here are the few activities of Raza Academy of recent times. I am not going into details of its activities from its inception.

May 6, 2021: Raza Academy Chief Saeed Noori has released a Video message. He condemned the removal of ‘Muslim Only’ boards at Madinah by Saudi Government. He also blamed Saudi government for opening Cinema Hall, Fashion Show, Clubs which violates Islamic Law. He appealed his followers to pray for the purity of Madinah (Harmain Shareefain) and Protection of Al-Aqsa Mosque from Israel.

May 19, 2021: FIR registered against Sudarshan News by Raza Academy in Mumbai for showing a visual of a missile attack on the dome of Holy Prophet’s Shrine. A Social Media Campaign demanding arrest of Suresh Chavhanke was led by Raza Academy.
Raza Academy, Akola delegation met district Collector. They handed over memorandum to Indian Government and demanded to pressurize Israel and stop bombing Palestine.

June 1, 2021: A delegation from Raza Academy met the Mumbai Police Commissioner (Law and Order). They demanded immediate arrest of Wasim Rizvi who is frequently hurting the sentiments of Muslims. Rizvi should be booked under UAPA, demands Raza Academy.

July 3, 2021: As demanded in the joint Press Conference of Raza Academy and VBA, MLC Kapil Patil is going to table a private member bill to stop blasphemy. Muslim Religious leaders have demanded State government to pass the bill and stop any king of defamation of Religious figures. Professor Abdul Majeed Siddiqui in a Video message said there is intentional defamation of Islamic figures happening in Maharashtra and India. We want a law to take care of Communal harmony by restricting people against the defamation of any religious figure. MLC Kapil Patil has agreed to table a Private member bill on the request of VBA President Prakash Ambedkar.

Raza Academy had called a Maharashtra Bandh, on 12th November 2021. It was well received by all the Barelvi groups in Maharashtra. Major figures from local Barelvi centers led the protest in various parts of Maharashtra. Their demands were as follows.
Demands:
Prophet Mohd Bill to stop blasphemy
Peoples like Wasim Rizvi should be arrested for blasphemy
Action against Tripura Violence
Inflammatory speeches boiled the atmosphere. As per early trends large gatherings were reported at Nanded, Amravati, Parbhani, Hingoli, Partur, Jalna. Violence reported at Nanded, Amravati, Malegaon, Pusad, Bhiwandi. With newfound legitimacy under Uddhav Govt, Raza Academy is emboldened enough to reassert itself in civil society which is dangerous.

The current coalition government in Maharashtra seems to be behaving helplessly hands tied in front of the radical elements who has the ability to create massive unrest. The dangerous game designed and allowed to carry out is a well planned strategy to destabilise a nation using religion card and implement their old agenda of Gazwa e Hind. On August 8, 2019, the President assented to amendments to the Unlawful Activities (Prevention) Act (UAPA), 1967. We have seen that previously government had banned organisation like SIMI. Merely banning organisation is not a solution, as they individual then can become a part of new organisation with similar designs or form one. However with this amendment to Unlawful Activities (Prevention) Act (UAPA), 1967, which empowers the government to designate individuals as terrorists. When terror organisations are banned, these individuals who form the terror groups, form another organisation. When Safdar Nagori, former president of banned Students Islamic Movement of India (SIMI), was arrested from Indore in March 2008, the radical Islamist told his interrogators that he regards Mullah Omar, then Emir-ul-Momeen of Taliban, the true Caliph of Muslim world. According to Indian counter-terrorism experts, SIMI does not exist, but many its cadres have shifted other organisations. Given the fact that Sunni radicals in India draw inspiration from the Sunni Pashtun group currently controlling Kabul, the rise of Taliban in Afghanistan sends a clear message to all jihadists that practitioners of true Islam will finally emerge victorious, and this is the only way to Dar-ul-Islam. With Pakistan being the mother lode of jihad, it is quite evident that the ISI will be the elephant in Taliban’s jihad control room in Afghanistan and will use the Sunni terrorist group for also settling personal scores in India by creating situations of civil war and border war at the same time.

Guest Writer
Previous articleChina is in Deep Panic: Is it planning to orchestrate a Diplomatic or Military Misadventure??
Next articleSalman Khurshid, Congress & the fake agenda to demonise Hindutva.
- Advertisement -