BollyDawood and the Story of Girija Shettar 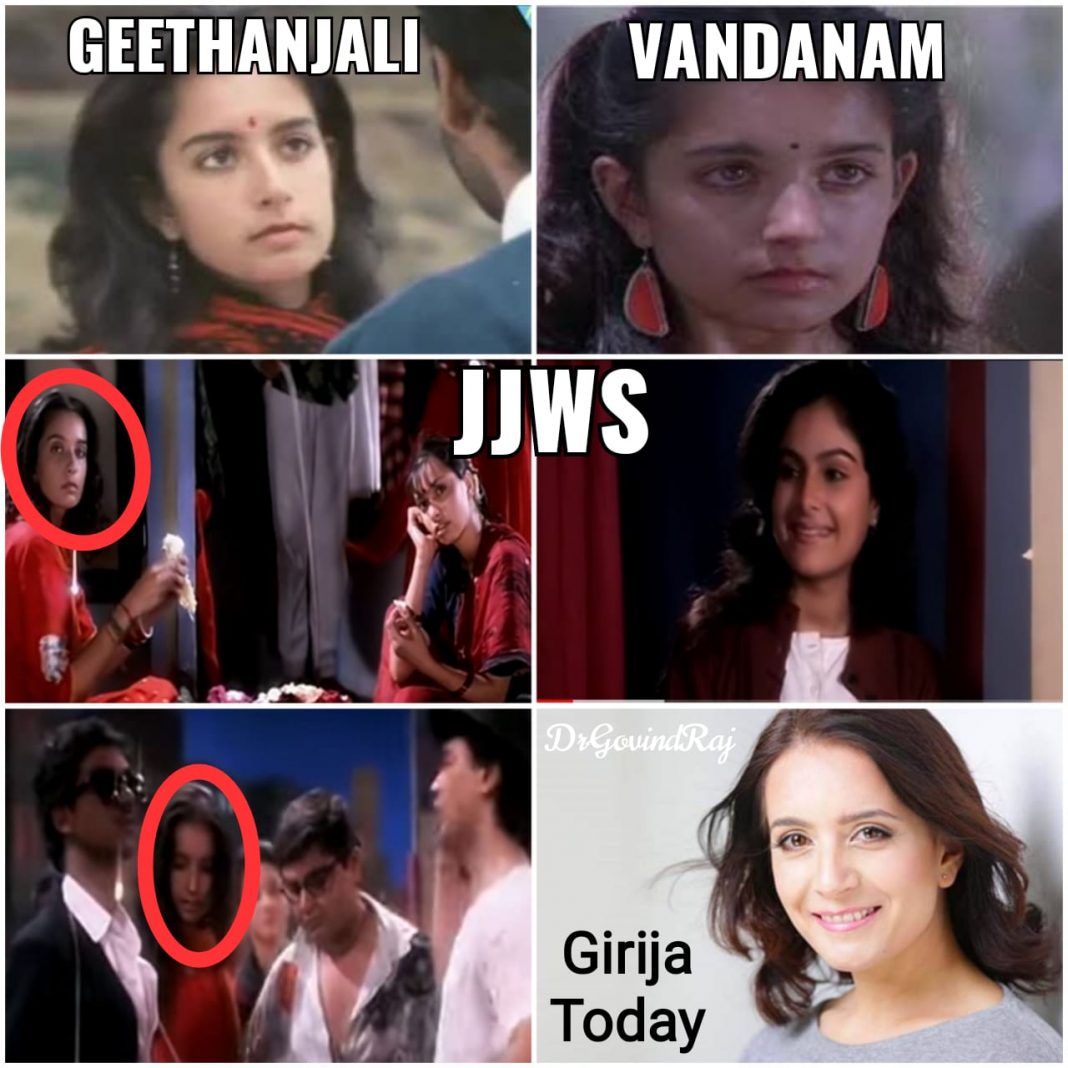 Here is a follow up on my earlier article published on Trunicle and this is relevant now because it involves a person in news currently.

1989: Mani Ratnam’s “Geethanjali” redefined the the way Indian movies were made. It was truly the launch of Star-Director Mani, though he had made good movies before. “Geethanjali” had Nagarjuna and Girija Shettar in the lead. The vivacious girl with innocent looks captured the imagination of youth and was also seen with Mohanlal in “Vandanam” in Malayalam. Both these movies were blockbusters.

Girija (she was known with mononym in those days) was a Superstar in the making. With good educational background, UK based upbringing and natural charm, she had greater things waiting to happen. She was again paired up with Mohanlal in “Dhanushkodi”, a Priyadarshan movie. In Telugu, she had “Hridayanjali”, another heroine oriented love story coming up. And then Aamir Khan happened.

Watch the “Jawan Ho Yaaron Yeh Tumko Hua Kya” song from the 1992 Mansoor Khan hit “Jo Jeeta Wohi Sikandar” (JJWS) movie. Those who already don’t know will be shocked to know this fact. We can see Girija dancing on stage like an extra artist. Ayesha Jhulka, the heroine in the movie can be seen on the sidestage, watching the dance, shown as part of an inter-school competition. Why did a Superstar in the making do such a trivial dancer’s role ? That’s where the BollyDawood comes in.

Mansoor Khan had released the hugely popular cult hit “Qayamat Se Qayamat Tak” (QSQT) in 1988 and had launched his next, JJWS in 1990. Girija was the lead girl when he launched the movie. She had shot some portions of the movie, including the song mentioned above. Then she ran into trouble with Mr. Perfectionist and Co. Girija never disclosed what were her issues but simply walked out of the movie and left the industry altogether. She just left when she was on the threshold of a potentially great career.

Girija’s “Dhanushkodi” in Malayalam was shelved because the project was seen as “financially not feasible”. Point to be remembered is, a Priyadarshan – Mohanlal movie was shelved. Girija completed her commitment to “Hridayanjali” in 1992, the year she left. But the movie remained in the cans for a decade and was released in 2002 and fizzled out without even a whimper.

How did a star destined for greatness just disappear ? We can find some answers in the song “Jawan Ho Yaaron”. Though Girija walked out of the movie, they retained her scenes where she looked like an obscure chorus dancer. It was a deliberate act of vengeance. They just wanted to make her look insignificant and trivial.

Why did Girija leave ? What were her problems ? What was Aamir Khan’s role ? We may never find answers to these questions. But all we know is Girija, who worked with Mani Ratnam, Nagarjuna, Priyadarshan and Mohanlal without any issues walked out of a Mansoor Khan – Aamir Khan movie. Not just the movie, she left the industry when she was looking destined for a great career.

Common sense suggests Girija couldn’t have walked out of JJWS because of differences with a spotboy or a cameraman. There wasn’t a second lead girl to contend with either. We can safely conclude Girija’s problems were with Aamir and / or Mansoor. Both were from same family and connected to the production house. Aamir’s reputation as “difficult to work with” and his spats with Juhi Chawla were well known in those days.

Girija wasn’t the first promising young artist to suffer a premature end to her career, nor was she the last. But she was perhaps one of the early victims of the Dawoodization process of Bollywood. Walking out of a project due to work place incompatibility isn’t uncommon. But leaving the cinema field altogether isn’t easy to understand or explain. If we have understood how the D-Company was usurping Bollywood in those days, we can connect the dots. Rajiv Rai, the Director who made gigantic hits like “Tridev” and “Mohra” too left the industry and relocated to UK with his wife Sonam due to extortionist threats from the Underworld.

Divya Bharti was the next victim and she paid with her life. Divya Bharti’s was neither a case of suicide nor an accident. We will come to that in the third part of this series on BollyDawood.