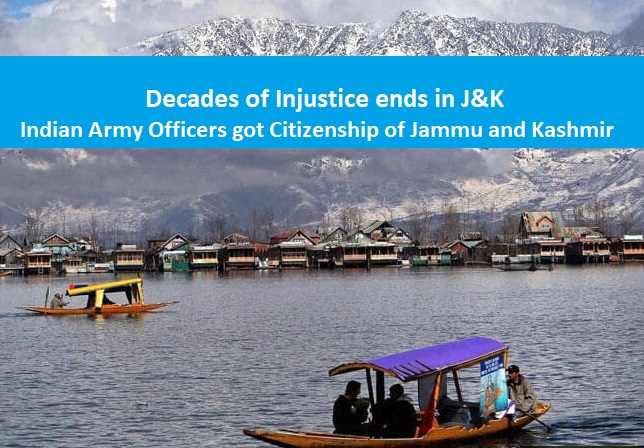 On 5th August 2019, the history and future of Jammu and Kashmir was changed forever. Until last year, state of Jammu and Kashmir enjoyed a special status under the constitutional provisions of Article 370 and 35A due to immature policies of previous Governments. These articles didn’t allow anyone from the rest of India to obtain domicile status there. This simply meant any outsider couldn’t apply for jobs in the local government or own property there.

Both the Articles were vehemently criticized by BJP for their discriminatory nature. However, both these provisions were abolished on 5 August last year. On May 18th this year, Government notified the Jammu and Kashmir Grant of Domicile Certificate (Procedure) Rules and allowed different categories of non-locals, including non-local government employees, to register for domicile certificates.

On June 27th, the Government started the process of distributing domicile certificates among people belonging to different sections who had been living in the Union Territory (UT) for the last seven decades but were deprived of their legitimate citizenship rights.

Now, moving ahead with its course correction process, Modi government has started providing Domicile to the people who are fulfilling the criteria and living in the State for many years and serving it. Last month Government granted domicile certificates to more than 25,000 people, and now domicile certificates have been granted to 6,600 more people.

But this one is very special; most of the current lot belong to the Gorkha community’s retired soldiers from the Indian Army. Now they can buy property and will be employable in the Union Territory. Apart from Indian Army soldiers and Officers, the domicile is also granted to people from Valmiki group and West Pakistan refugees.

Why granting domicile to Gorkhas is special?

Gorkhas, known for their valor, courage and professionalism. Almost 150 years ago, Maharaja of Kashmir invited Gorkhas from Nepal to serve his Army. Since then they have been living here without any sort of rights to apply for jobs in Jammu and Kashmir, they however, have been serving the Indian Army. This is indeed a saga of discrimination and injustice for Gorkhas, and this step brings a big relief for the Gorkha local community, which is resided in the State for over 150 years. Now their children can apply for jobs in Jammu and Kashmir, else earlier they have to migrate to other parts of India for jobs.

It is also a known fact that more than 1 Lakh Gorkhas live in Jammu and Kashmir. The community could cast their votes in local and assembly elections, but they were barred from owning a land and property in the state.

A big relief for Valmiki Community

Another big beneficiary of new domicile act is Valmiki community. Valmikis were brought into Jammu and Kashmir in 1957 by the then Bakshi Government to quell a Union Protest by local sanitization workers. Since then Valmiki’s were forced to work as Sanitization workers only, three generations later, they still do not have a permanent resident certificate which barred their children to apply for any state jobs and own a property.

How Lt. Governor Murmu instrumental in this whole exercise?

State Government under Lt. Governor has started an effective process to grant domicile certificates to all the applicants. They have received more than 33,000 applications so far; on an average they are getting 200 applications per day. Government has made very strict rule, where the officers can be penalized up to Rs 50,000 if they do not issue the certificate within 15 days of receiving an application.

Any Individual is eligible for domicile status of Jammu and Kashmir if he/she fulfils the underneath criteria.

This new domicile law will pave the way of correcting the long going discrimination in the state of Jammu and Kashmir, and it has been a long pending demand of all Nationalists since independence. On the contrary, the opposition parties (Congress) and local Kashmiri parties (PDP or National Conference) fear that this step would lead to demographic transformation of the region from Muslim majority to Hindu Majority. However, they conveniently forget the infamous Kashmir Pandit Exodus, where more than 5 Lakh Kashmiri Pandits were looted, beaten, raped by Kashmir Muslims and thrown out of their own state.

But that’s why Nation voted for Modi Government, to end the long pending issues and stop the injustice. Seems Acche Din have started for the people of Jammu and Kashmir.