Besides COVID-19 virus, India is also fighting with left leaning vulture journalists, who are spreading more panic and despair than pandemic 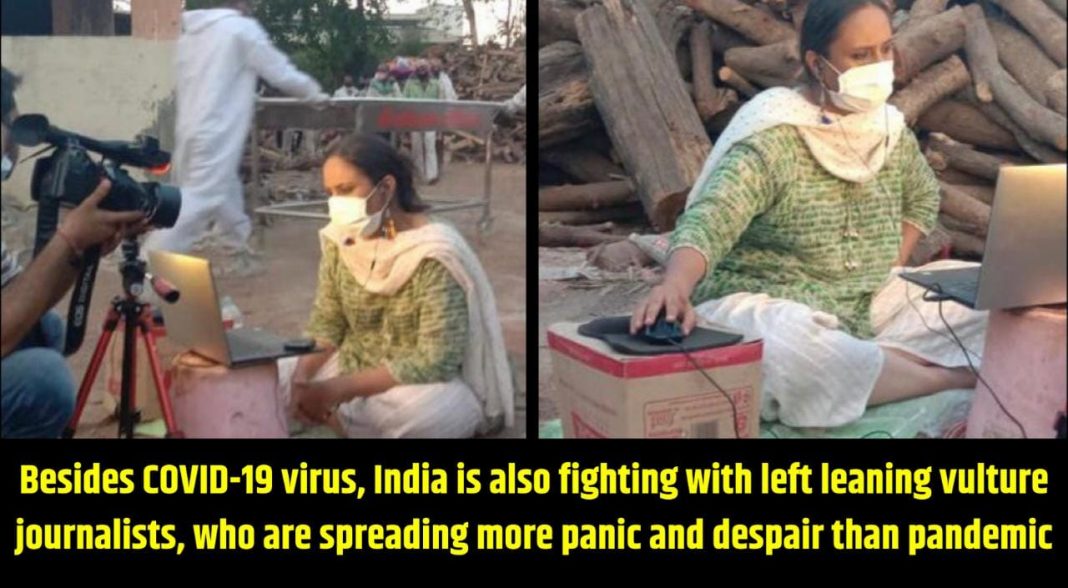 No one, I repeat, no one should die due to lack of medical care. Every death is painful and heart-wrenching, even if the country’s medical system is overburdened and doctors are toiling hard to save the Covid-19 patients amid unprecedented surge of cases in the second wave. Then, there are journalists and reporters, toxic ones, who rub salt into India’s wounds by manipulating national tragedy to carry out their agenda against the state. They go on to the extent of distorting certain facts of truth to make it look a valid and convincing.

They used national tragedy as a propaganda tool.

It is said whoever controls the media, controls the mind of people, or they try to. Second wave of Covid-19—which is more deadly and devastating than its first wave in India, because of its regional mutant variant in it—came as a golden opportunity for left leaning vulture media men to shame, defame and humiliate India on international platforms. And they grabbed the opportunity to sell the human tragedy for their vested interest.

NEW YORK POST used a photo of a gas leakage incident in May 2020.

To sensationalize the deadly second wave of Covid-19 in India, NEW YORK POST used a heart wrenching picture—which had an unconscious woman lying on the street, while another woman, appeared to be her daughter, trying to wake her up—to show tragedy of second wave of Covid-19. What is shocking is that the picture is of the Gas Leakage incident, which took place at LG Polymer chemical plant in a village in Visakhapatnam on 7 May 2020. NEW YORK POST ran the story with a misleading picture under headline of “COVID surge swallowing people in India, footage shows people dead in streets” on 26 April 2021. It is to be recalled the unfortunate incident had led to Gas leakage causing breathing problems to people over a radius of 3 KM in surrounding area.

However, when NY POST was slammed by netizens, they changed the feature image, but the article and headline remained the same. Why did NEW YORK POST go into overdrive to sell tragedy in India by using fake pictures? Do they wait for tragedy in India to manipulate as a propaganda machine?

Tragedy was used as a commodity.

British American Media Company, Getty Images is selling images of grim Hindu Funeral pyres lit ablaze in crematorium to sensationalize non-Indian readers. Any media group can buy the largest size picture for Rs. 23,000. Be it Indian photo journalists or non-Indian photographers both are clicking; both are making money out of pandemic by clicking photos at crematorium denying dignity at the tragic death of Covid-19 victims.

Barkha Dutt didn’t spare even her father’s death for her propaganda.

Then, Barkha Dutt’s old father succumbed to Covid-19, unfortunately. But, the grieving daughter used every word to describe her father’s death to suit her propaganda. Selection of words is enough to influence readers deeply—My father’s last words, I am choking, treat me.

What Barkha Dutt didn’t remind her audience and the CNN reporter that he was admitted in a premier hospital, Medanta hospital, and he was being treated by a group of best doctors. Even after being treated by the best doctors, the last words of Barkha Dutt’s father was, “treat me, I am choking.” Does it sound sane? Also, only Barkha Dutt can tell how she was allowed in ICU, where her father was admitted, to listen to his last words.

Barkha Dutt is a perfect example of vulture left leaning media, who can use her father’s death to spin a propaganda. Dear Barkha Dutt, your father was being treated by a group of best doctors in a best hospital, Medanta. Nevertheless, his last words were, “I am choking, treat me.” Then, who should have treated him? What about those who are struggling even to get a bed in hospital?

There is an unprecedented rise in Covid-19 positive cases in India. Medical facilities and infrastructure are overwhelmed. For a patient, it is a battle to get admitted in hospital. However, India’s health infrastructures are working day and night to save as many patients as they can. The job of the media is to raise constructive criticism. But, left leaning media is creating a wave of panic even among those who are not suffering from Covid-19.

Manisha Inamdar
Previous articleWhy Modi Government is not allowing the Pfizer vaccine in India?? A shocking story of Global Pharma Arm-Twisting TACTICS
Next articleEnough of your religious beliefs, national security is paramount
- Advertisement -