Ahom Kingdom from Assam, which never fell to Mughals, but defeated them in “Battle of Saraighat.” Is that why Ahom kingdom deleted in history text books? 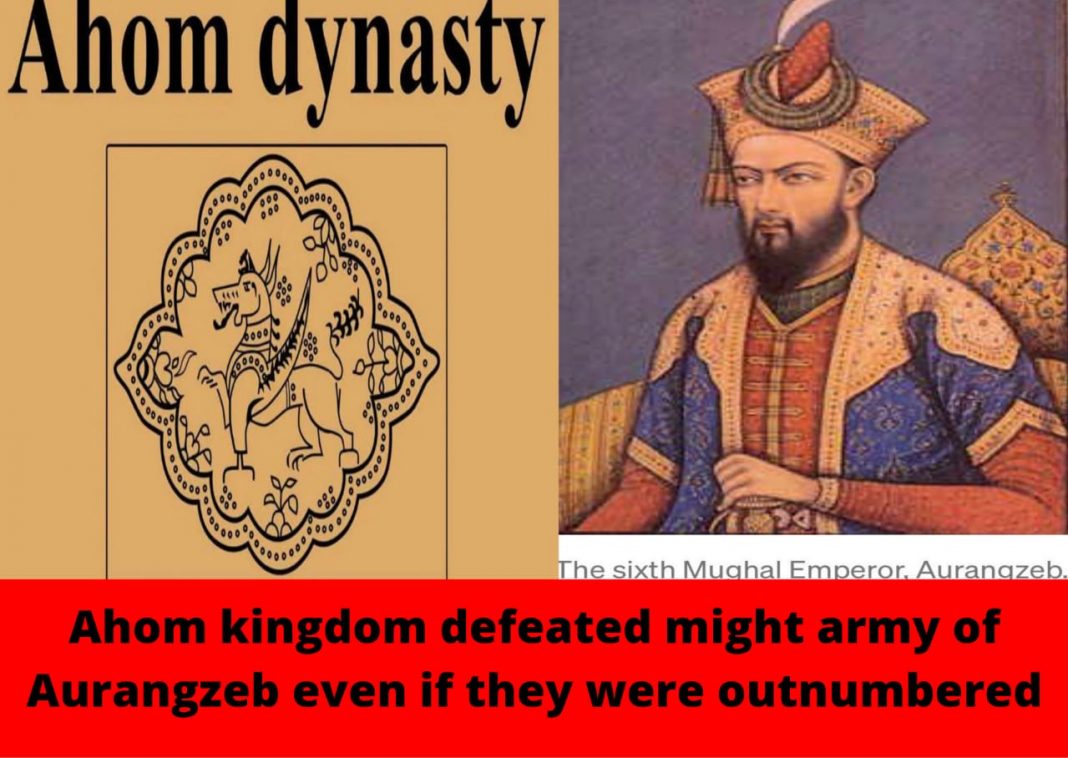 Why history text books in India have no place for Battle of Saraighat, a naval battle between Mughal Empire and Ahom kingdom, on the Brahmaputra river at Saraighat, now Guwahati in Assam, in 1671 AD?

A Prince called Chaolung Sukapha left a place called Maulung (which is now known as Myanmar) with his wives, his children, his nobles and his close associates in 1215 AD. “A History of Assam” written by Sir Edward Gait explains Prince Sukapha reached Brahmaputra valley with his entourage of 9000 people in 1235 AD. They settled in Charaideo in upper Assam.

Chaolung Sukapha founded his first kingdom in Charaideo. Instead of fighting wars with chieftains and vassals, king Sukapha befriended and utilized local tribes’ skills and talents to expand his kingdom. At times, he did use his military prowess to annexe new communities such as Bhuiyans (Landlors). The Ahom kingdom grew rapidly, as many local tribes joined it turning into a multi ethnic and inclusive kingdom. Sukapha consolidated power, culture and religion by assimilating different communities and tribes such as the Sutias, the Morans, and the Kacharis into his kingdom developing an amiable relationship with them. That is why Sukapha is called the architect of “Greater Assam.”

Even if Ahoms worshipped their own tribal Gods, they didn’t impose their rituals and their language on tribes and communities in Assam. Later, Ahom kingdom embraced Hindu religion and built many Hindu temples unlike Mughals, who ferociously destroyed Hindu temples and heritages in India and imposed their languages.Since speakers of their previous language got lesser in numbers, Assamese replaced in the kingdom.

During his reign, Ahom dynasties—who ruled Assam for six centuries till it was annexed to British India in 1826—created a society, which was known for arts, agriculture, engineering and robust economy. Poets and scholars were applauded and honoured by granting them lands. Ancients works in Sanskrit were translated into the local language.

In 17th century expansionist and tyranny, Mughal realized the strategic importance of Brahmaputra river. When Aurangzeb ascended the throne, he commanded Mir Jumla, Mughal General at Dhaka to capture Assam. In 1661 AD Mir Jumla led a huge army and captured their capital Garghaon by defeating them. Ahom king Jayadhwaj Singha was forced to agree for a humiliating treaty, which compelled the Ahom to give Mughals territory from Guwahati to Manas river along with large amount of money.

The successor, King Chakradhwaj Singha, who had vowed to recover the lost territories, appointed Lachit Borphukan as the new Commander-in-Chief. In November 1667, Ahom army under Lachit Borphukan launched an attack and successfully crushed Mughals to recapture Guwahati.

When Aurangzeb received the news of defeat at the hands of Ahom in December 1667, he sent his strong army to take back Guwahati. His Army reached Rangamati in February 1669.

Lachit Borphukan and his army had anticipated a counter strike from Mughal. His army had started reinforcing Guwahati defence by constructing walls and planting obstacles to deal with a retaliatory attack by Mughal Army. Ahoms utilized the hilly terrain of Guwahati to their gain to ensure the complete safety. Ahoms were said to have followed movement of Mughal army from Delhi.

In 1669, Mughal reached up to Manas river with its army, which had 35,000 infantry, 18,000 cavalry, 2000 archers along with 40 ships. Sharp Ahom army chose hilly area of Guwahati as their battleground, instead of open field against Mughal army. Mughal forces couldn’t find sufficient mobility in absence of open fields to reach Ahom kingdom. The only option was left via Brahmaputra river passing through it. Brahmaputra at Saraighat was at its narrowest 1 km width, which was ideal defence for Ahoms. When Mughals found Guwahati impregnable by land, they were forced to use their navy, which was their weakest point.

After strategic retreat, it was Lachit Borphukan’s clarion call to all his soldiers with fine strategy that made Ahoms fight till their last breath, ultimately defeating mighty army of Mughals, even if Ahoms were outnumbered in 1671.

What can be more unfortunate than this that such motivating historical battle couldn’t find its due place in history text books.

However, the National Defence Academy (NDA) has been conferring the best passing out cadet with the Lachit Borphukan Medal since 1999. Assam celebrates ‘Asom Divas’ on 2nd December every year to commemorate Sukapha and his rule.

Manisha Inamdar
Previous articleThe smooth and successful vaccination drive by Modi Govt is something that is unimaginable for any other Party in India !!
Next articleWhy Congress is so desperate to save Nirav Modi? Senior BJP leader Bhupendra Yadav SLAMS Congress appointed Judges who shielded Nirav Modi
- Advertisement -