A forgotten hero in history, Harphool Jat Julani, who was freedom fighter and Gaurakshak 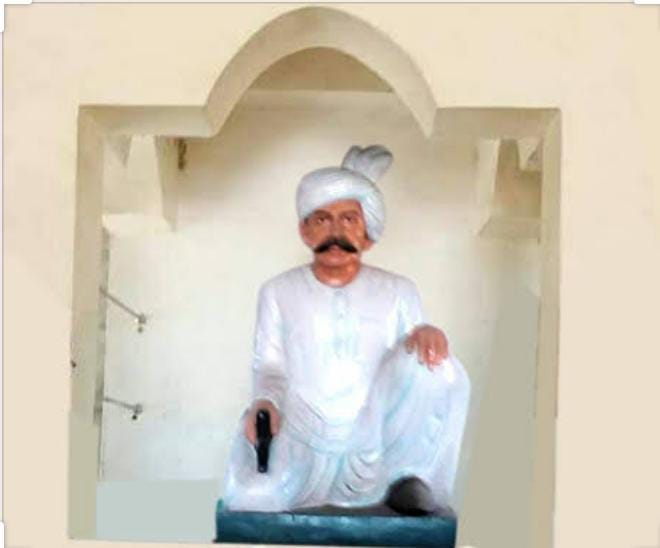 The Sawa Sher of Haryana , also known as haryanvi version of Robinhood , Harphool Jat Julani.
The person who fought against the slaughtering of cows in India by Muslims and Britishers.
The government has recently taken steps to stop the slaughtering of cows but few secular liberals see it as a plan of government to gain the Hindu votes. So specially for those liberal & our readers we bring you the story of a man in pre independence history , who is not only remembered for his activities to stop slaughtering of cows but also acted against the injustice to the community & individuals.
Harphool was born in the Barwas village of Bhiwani , Haryana in 1892 in the peasant family . He lost his father at the age of 7 due to plague . His mother then got married to her brother in law. Finding life difficult at Barwas, the family came to Julani . He was denied his share in the land by his uncles and they also conspired with villagers to get Harphool arrested by Jind Police under illegal allegations. He was released after being brutally tortured at the custody.
Harphool was always passionate about joining Indian army to learn the art of warfare , so did he and served 10 years in defence. He had also participated in the First world war. He was brilliant during his tenure and also once protected the British family from the enemies , hence was gifted a folding gun on his retirement when he asked for it.
On returning back to his village ,he first shot dead the officer who had tortured him in childhood . After this he went home where he came to know that his mother had passed away.
Shocked and disheartened , Harphool then left home and went to the forest . He met a sadhu who reared cows. He consoled the grieving Harphool and explained how cow is a mother too. Ever since then he started considering cow his mother and took good care of them.
Slaughtering of cows was the common practice in the region he lived. Hence he started destroying those slaughter houses and killing the butchers. He not only saved many cows but also successfully halted the smuggling of cows.
One such historical attack happened on 23rd July 1930, at the Tohana village. Inspite of the continuous opposition from the local Hindus , those butchers continued with their activities . The slaughtering of cows was carried out by the Muslim Ranghars . The Nain khap of 52 villages had attacked this slaughter house many times but did not succeed . Finally they approached Harphool for help to which he readily agreed . He conned those butchers by disguising as a lady . While he kept the butcher engaged , Harphool’s men attacked the slaughter house and created the huge destruction for their Inexcuseable act . Thousands of cows were freed. Hence the Nain khap of 52 villages awarded him with the title of Sawa Sher.
He had even destroyed many slaughter houses in Jind , Narwana , Rohtak and Gohana .
Apart from his love for cows he also worked for the poor and oppressed people . He was said to be a mobile court as he use to provide justice to the poor instantly. He was recognised at the national level by this time . All of these actions took the sleep away of the British .After making all failed attempts to capture him , they then declared an award for his arrest.
Harphool Jat continued his gaurakshak activities even while he was underground . Once he was hiding at his sisters place at village Pachari Kalan , one of the traitor informed police about his stay . He was arrested when he was asleep at night . Initially he was kept at the Jind police station , later he was secretly transferred to the Ferozepur jail where he was hanged in 1936 . His dead body was thrown in the Sutlej river instead of handling it to the relatives out of the fear that there may be rebels in his favour . This Gau-putra spend his life for the protection of cows .
Let me also bring this point that he wasn’t the first gaurakshak . During the British rule thousands of Hindus and Sikhs revolted against the slaughtering of cows . The British allowed Muslims to built slaughter houses across the country . One such moment was the Kuka movement wherein the gaurakshaks were mainly Namdhari Sikhs and disciples of Sath Guru Ram Singh . In January 1872 , 150 kukas attacked butchers at Maler Kota . As the British government favoured Muslims for slaughter houses , they immediately arrested 66 kukas. They were bought to the Maler Kota ground and , without any trial , was killed brutally .
Such stories of Gaurakshaks are missing in our history chapters.