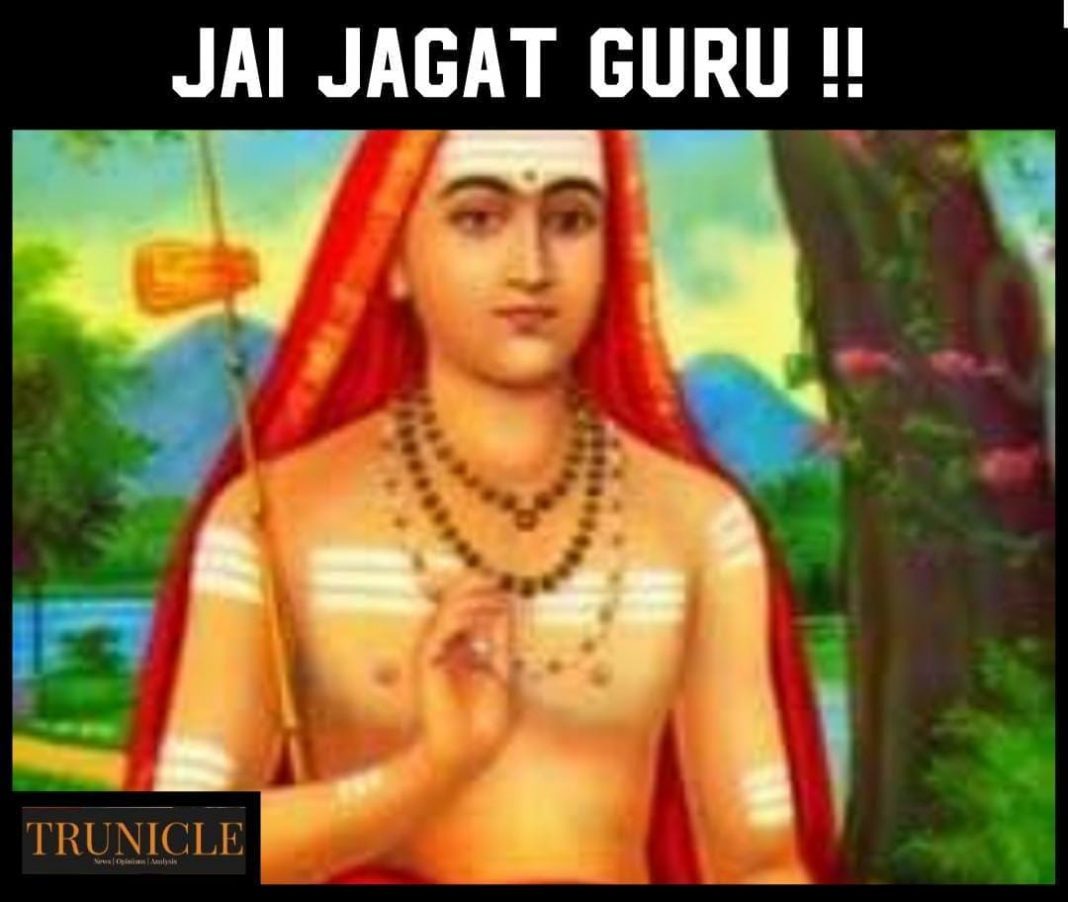 Sankara was an infant prodigy. The superior genius and the extraordinary intelligence were clearly sprouting in him even when he was a kid. This wonder of a child had even by his third year finished reading many scriptures, and by only listening to the readings and chantings of the Vedas, Vedanta, Ramayana, Mahabharata and Puranas had learnt them. The most surprising thing about the kid was that he was a “Ekasruthidhara” (one who can repeat in full, all that he hears just once). Whatever he read or heard got indelibly impressed in his memory. And he could relate them when necessary to find the answers for the questions that arise from within.

One day a few astrologers arrived at Sankara’s home. The astrologers expressed a desire to look into the horoscope of Sankara. On examining the horoscope, they said that there could be some major events that could happen in his eighth or sixteenth or thirty second year.

He took sanyasa when he was Eight. Wrote commentaries on Brahma Sutra, Upanishads and Bhagavad Gita which was considered as “Prasthana Traya” (Three sources of Theology) at the age of Sixteen. Brahma Sutras give the Yukti Prasthana (Logical source) and are also called Sutra, Upanishads provide the Upadesha Prasthana (Injunctive source) also called Sruti and Bhagavad Gita is the Sadhana Prasthana (Instrumental source) also called Smriti. When he was Thirty Two he had done with the purpose of his visit on to this earth plane.

He integrated Haindava Dharma by bringing all the six sub sects together namely the Shaiva, Vaishnava, Shaktha, Ganapathya, Koumara and Soura (The worshipers of Shiva, Vishnu, Shakti, Ganesha, Karthikeya and Surya respectively). He is probably the only Acharya who advocated Jnana on equal terms at that time. His works like Bhajagovindam, Krishnastakam, Govindastakam, Vishwanathastakam, Vishwanathastaka are filled with Bhakti along with Jnana.

Another most interesting works to mention here is the “Pancha Panchakam” the collection of five pentands presented to the learned audience for the first time in this format. This Pentand contains Manisha, Maya, Sadhana, Kashi and Matru Panchakam.

Manisha Panchakam is dealt with extensively with exhaustive notes highlighting the greatness of Advaita as a system which can be put to practice.

The Maya Panchakam is Shakara’s awe at the powers of Maya and the illusory web it can casts.

Sadhana Panchakam prescribes steps to be undertaken by an aspirant to climb on to the ladder leading to Moksha.

Kashi Panchakam is a unique text which explains the spiritual significance of the holy city of Varanasi (Kashi), and equates the various spots of pilgrimage in Kashi with the various aspects of Self, and implores every devotee to purge deeper within to realize Kashi within oneself.

The last, Matru Panchakam is an ode to motherhood said to be composed when Sankara met his mother breathing her last.

He advocated the supremacy and authority of Vedas over all other scriptures. He eradicated almost all Durmathas (Bad Sects) like Kapalikas and Kalamukhas, who perform vigorous worship by sacrificing humans and animals. He introduced the Samaya (sa maya – with Maya) tantric school, when Kaula and Mishra were extensively used for Vamachara (Left Path).

This write-up is too very little to speak about the greatness of the Acharya. And I am insignificant even to think of writing about that huge personality. Today being his appearance day I just had a recap on what I know about the Great Acharya and shared with you all.