What kind of mental slavery was India’s first PM, Nehru suffering from that he ordered to cover all the temples and deities in Kashi during Saudi King’s visit to India in 1955? 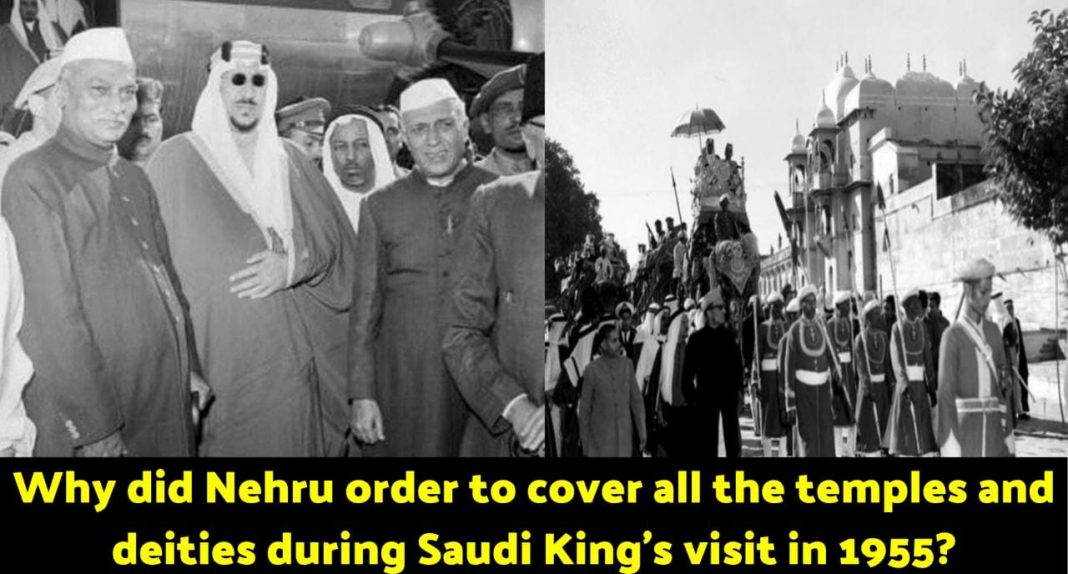 An ancient temple, which is a masterpiece of art and architecture, tells the tale of its glorious past. Can a Hindu ever be ashamed of displaying the ancient temple, the rich cultural heritage of his country, to his guest? But, India’s first Prime Minister, Jawahar Lal Nehru was so embarrassed and regretful about temples that he asked to cover all the deities and temples in Kashi, when Saudi King Saud bin Abdul Aziz Al-Saud was touring India’s ancient city, Kashi in December 1955.

Saudi King Saud bin Abdul Aziz had paid a 17-day long visit to India at the invitation of Prime Minister Jawahar Lal Nehru. The King was received with warm welcome in full royal fashion on 4 December 1955. During the historic visit His Majesty, King Saudi bin Abdul Aziz, who had brought a large delegation with him including several princes, was touring several Indian cities such as Mumbai, Hyderabad, Mysore, Shimla, Agra, Aligarh and Varanasi.

When Saudi King reached Varanasi, then Indian PM, Nehru ordered to cover all the temples and idols—which came in the way of King’s convoy—with curtains. Until Saudi King, Saud bin Abdul Aziz stayed in Varanasi, all the government buildings in the city were flagged with the words “Kalma Tayyiba.” Puja and Aarti were stopped at temples.

What kind of mental slavery was India’s first PM Nehru suffering from? What was the need to cover temples and deities, which are root and cultural heritage of India? Varanasi, also called Kashi, is not only one of the holiest cities in India but it is an ancient city, which is full of ancient temples as well as contemporary ones. Kashi is the city, which was brutally attacked and destroyed in several Islamic invasions. Kashi Vishwanath Temple, which stands on the western bank of holy river Ganga, is one of the 12 Jyotirlingas.

Kashi Vishwanath Temple, which is mentioned in Skanda Puranas, was first destroyed by Qutbuddin Aibak, commander of Mohammad Ghori in 1194 AD. It was rebuilt by Gujarati merchant 100 years later. It was again attacked by Sikandar Lodhi. The temple was reconstructed by Raja Man Singh and Raja Todermal in 1585. In October 1669, Aurangzeb brutally attacked the city of Kashi. His blood thirsty army destroyed every temple that came their way, butchered every devotee, who tried to save the temple. When Aurangzeb attacked Gyanvapi Kashi Vishwanath Temple, the head priest of the temple jumped to well holding the Shiv Ling with his chest to protect it. Aurangzeb demolished Gyanvapi Kashi Vishwanath Temple and built Gyanvapi mosque in its place.

India’s civilizational wounds are very deep in the form of mosques, majority of them were built after demolishing temples. Why did Nehru defend the belief of attacker and oppressor? Why did Nehru prostrate before Saudi King by insulting the nation’s own cultural heritage? Why should India follow what Saudi King conforms to in his country?

The worst form of mental slavery Nehru displayed when he asked Saudi King to tell the world that fate of Indian Muslim was in safe hand.

Irony died thousand deaths. In 1955, when Nehru requested Saudi King to say, “fate of Indian Muslim was in safe hand,” he meant to say perpetrators were in safe hand of victims.

On 25 September 1956. India’s first Prime Minister too visited Saudi Arabia to carry forward West Asia diplomacy. Did Saudi King build any temple to welcome Nehru? Temple was unthinkable in Saudi Arabia, as it defies their religious belief. In other words, Saudi Arabia didn’t compromise with its beliefs and principles. But, Nehru was standing, having bowed down his head to please Saudi King.

What was Nehru’s approach to nation building? By injecting mental slavery, which gives illusion to defend and glorify the oppressor? A nation must study its past, if it wants to define the future. Islamic invaders, who seized India’s 1/3 land, inflicted traumatic wounds on India’s civilization that cannot be healed. British subjugation exploited India to the core. Then, Nehruvian ideology, which taught India to humiliate its root, religion and cultural heritages, carried forward to inject mental subjugation.

India needs to do soul searching.

Manisha Inamdar
Previous articleOne Bangla’r Meye is Dead while another projects herself as CM.
Next articleAlbert Borula Ceo,Pfizer & his Loyalty to the nation.
- Advertisement -