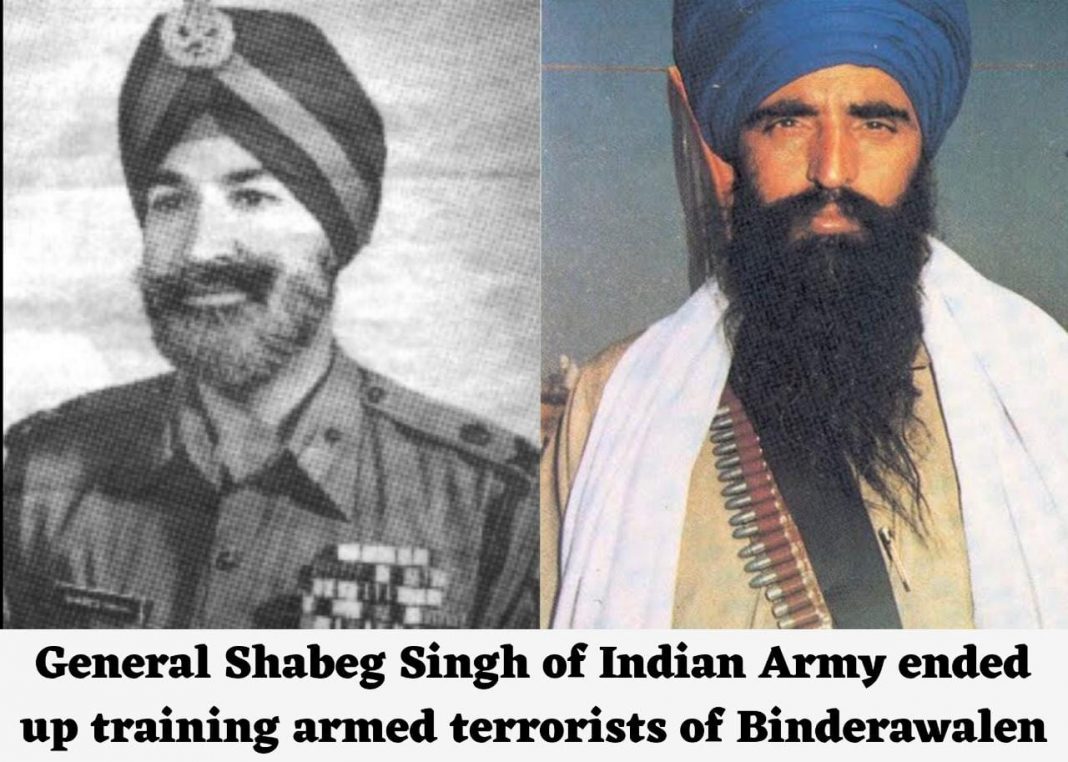 He conspired and fought against the very Army, which he had served for decades. He chose to serve his faith with a misguided cause, even if he had to betray his nation to his eternal disgrace.

Here is the story of Major General Shabeg Singh, who acquired mastery of guerilla warfare from Indian Army only to use the same skill to serve the dreaded terrorist Jarnail Singh Bhinderanwale as his Military Advisor and Chief Operational Planner of Golden Temple’s defenses against India Army. It was Major General Shabeg’s guerrilla warfare skills and planning of defenses, which had costed Indian Army huge number of casualties, damages and destruction during 72 hours of Operation Blue Star in June 1984, when Indian forces were left with no other option but to launch an assault on Golden Temple in Amritsar, to flush out the terrorist Bhinderanwale and his armed fellow terrorists, who had created a reign of terror in Punjab in eighties by operating from Golden temple.

Why did Major General Shabeg Singh—once a decorated Army Officer, known for his service in training of Mukti Bahini volunteers and motivating them to fight for their land during Bangladesh Liberation War in 1971—betray his country and his Army?

Born on 23 January 1925 in a village near Amritsar, Subeg Singh, popularly known as Shabeg Singh, had been recruited to British Army in 1942 from Lahore college, where he was studying. Since then, he witnessed not only independence movement but participated in WWII, 1962 Indo-China War, 1965 Indo-Pak War and 1971 India-Pakistan war, which gave birth to Bangladesh.

On 30 April, 1976, one day prior to his retirement Major General Shabeg Singh was dismissed from the Army on charges of irregularities and corruption. There were also other cases against him such as he got a truck in somebody else’s name and he had built a house costing Rs. 9 lacs, though he claims it was worth of only Rs. 1.75 lacs. However, Supreme Court of India acquitted him of all charges.

As he firmly believed he was not guilty but victimized because of his religion, Major General Shabeg Singh was a changed man nursing deep sense of grievances against Army. Settled in Chandigarh around 1978-79, he was drawn to Akali politics. When he met the terrorist Jarnail Singh Bhinderanwale, his resentment found a voice in him to revenge against Indian Army.

It was Jarnail Singh Bhinderanwale, who had dishonoured the Sikh faith the most. Golden temple has been a place of worship, tranquility, harmony, mercy and service to humanity. Though Islamic invaders did attack Golden Temple, no Sikh ever dared to desecrate Golden temple the way Bhinderawale disgraced spiritual site of Sikhism.

How can a Sikh occupy Golden Temple to establish his world of crime? But he did. A mass murderer Bhinderawalen, who was not bound by ethics and moraliy, turned the Golden Temple complex into a place of torture and mass murder with spilling blood a frequent incident. Any Sikh, who criticized Bhindrawalen, was brutally eliminated. He not only stockpiled weapons inside the Sikh holy shrine, but housed his arm gangs at upper floor of Akal Takht. For any Sikh to stand above the Guru Granth Sahib was an act of absolute disregard. When 80 years old Giani Pratap Singh, a former Jathedar of the Akal Takht objected Bhinderawalen for occupying Akal Takht, he was killed in cold blood. Others were too silenced.

However, Major General Shabeg Singh chose to personally train each one of armed terrorists of Bhindranwale for guerilla warfare and also, supervised the Sikh defenses at the Harmandir Sahib. Shabeg Singh was not unwise to think he would win. But, his aim was to cause as much casualties as he could have done to armies. And he succeeded.

When more than 70,000 troops had been called to Punjab with tanks, army was under impression that arm gangs holed up in Golden Temple would not fight, and if they did, they would be broken in couple of hours. One of the generals pointed at black commandos, who were briefed, had said, “Have you seen these bhoots (devils) of mine? The terrorists would surrender with their tails between their legs. When first assault was counter attacked, the army realized how arm gangs of Bhindranwale were trained by Mukti Bahini hero Major General Shahbeg Singh.

According to official figure 83 army men were martyred, while number of civilian deaths was 492 due to presence of Major General Shahbeg Singh. His dead body was found with his boots on after the operation Blue Star was over on 6 June 1984.

Even if Major General Shabeg Singh believed he was wronged by Army, does it justify him to wage a war against Republic of India? Wasn’t he served justice by another institution, Supreme Court on 13 February 1984, if he assumed the institution of Army was unjust towards him? What would be outcome if every citizen, ill treated by system, turns traitor and begin bleeding India? Terrorism and treason by Major General Shahbeg to wage the war against the nation can never be justified.

Manisha Inamdar
Previous articleSignal or Telegram or WhatsApp or Parler or may be Tooter?
Next articleKeynesian Macroeconomic elements in Narendra Modi Infrastructure push leading to revival of economy
- Advertisement -