West Bengal : The Dilutuon of Durga pooja in the garb of Liberalism, Part 1 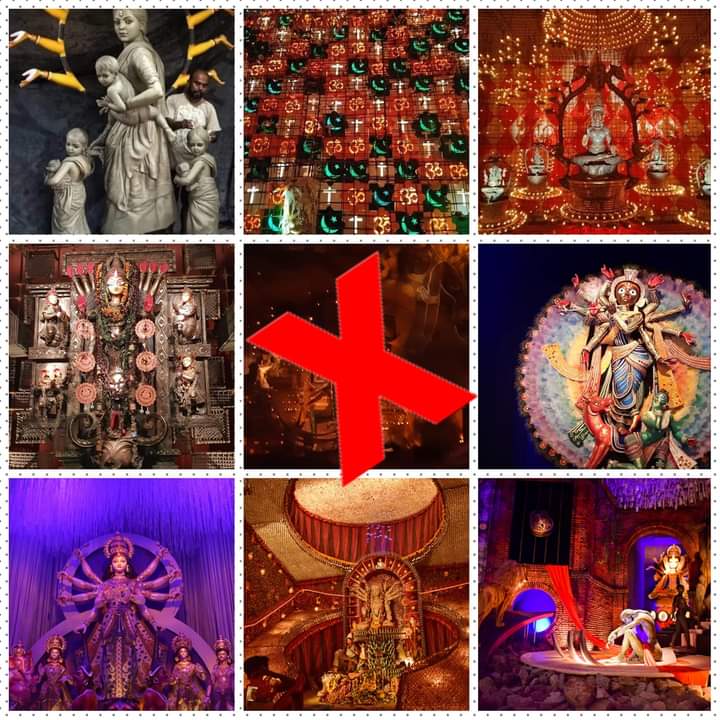 Durga Puja is not just the major festival of Bengal. It is an emotion, a feeling of De Ja Vu for Bengalis all over the world. While I am not against corporate financing of the pujas, since funds are obviously needed for organizing such a major event, I am against the dilution of the basic spirit of the Puja in the garb of creativity, known as theme pujas, just with the intent win the myriad corporate awards along with the fame & fortune associated with it. Durga Puja is not typical to Bengal and is celebrated nationwide as Navratri. The festival marks the victory of Good over Evil. It celebrates the victory of Maa Durga, who vanquished the evil Mahisasur and saved the celestials from his onslaught. This is the time during which Bhagwan Sri Ram performed ‘Akal Bodhon’ to pray to Maa Durga for achieving victory over Ravan. The cross over period between Ashtami and Navami (Sandhikhshan) was chosen to kill Ravan and the demon was finally killed on the day of Vijaya Dashami.

From the above it is evident that victory over the evil forces was not achieved through peace talks or peaceful gestures as depicted by some of the Durga Murtis in the photo. Durga Puja depicts the worship of Shakti in the feminine form. Hence it is her dashaprahanadharini image which is the essence of Durga Puja. Most of us brought up in the 80s and 90s are accustomed to that image which is how it should be. Maa Durga’s bening image to suit the needs of a theme kills the very spirit of the Puja. Some may justify the same in the name of art & creativity and also stating that a small dashaprahanadharini murty is kept in most pujas, which is the one which is actually worshipped, not the creative murtis. However, I feel that it is the bigger murty which is visible to one & all and leaves an indelible impression in a person’s mind. Hence tampering with it kills the very spirit of the Puja and I feel it is a deliberate attempt by the pseudo secular liberals to gradually turn this major hindu festival, worshipping Shakti or power & valour, inspiring hindus to vanquish their detractors, into a mere carnival, festival of food, colour, fanfare and a display of wealth.

The presence of Muz puppets offerring namaz and the reading of Azan in a North Kolkata pandal added fuel to the fire and sealed their intent. The Hindu community, specially that in Bengal, have always been taken for granted. And the urban gullible Bengalis simply don’t care and foolishly enjoy the dilution of their culture in the name of modern art and fanfare. Durga Puja had become Durgostab and Sharodotsab since the communist era, probably with this intent in mind. Yet these pseudo liberals keep propagating the narrative that the saffron brigade will stop the celebration of Durga Puja here once they assume power next year. What a foolish narrative that is – what they mean I presume, is that Durga Puja would again be celebrated as a Puja and not just as a carnival, which these pseudo secularists desire. Depicting Maa as a migrant labourer is another political propaganda by the ruling dispensation here to cover up their numerous misdeeds. Promoting a social cause through the Pujas is fine but tampering with the Durga Murti to spread their vile political agenda, is it really fine?

Our Maa during Durga Puja is Shakti Rupini, not just Matrirupini. So depicting her without weapons, in a benign form does smirk of a malicious ploy. If one wishes to worship her in a benign form, only as a mother, there are is Annapurna Puja. Can try such creativity then. But of course it is not as popular as Durga Puja and hence won’t pull a crowd!! Put your thinking caps on if you really do not wish our ancient culture and heritage to be lost in oblivion, courtesy these agenda-driven pseudo secularists. No other religious community tolerates dilution of their religious practices & festivals in the garb of modernism and liberalism. Why do we do so? Why are we so naive?