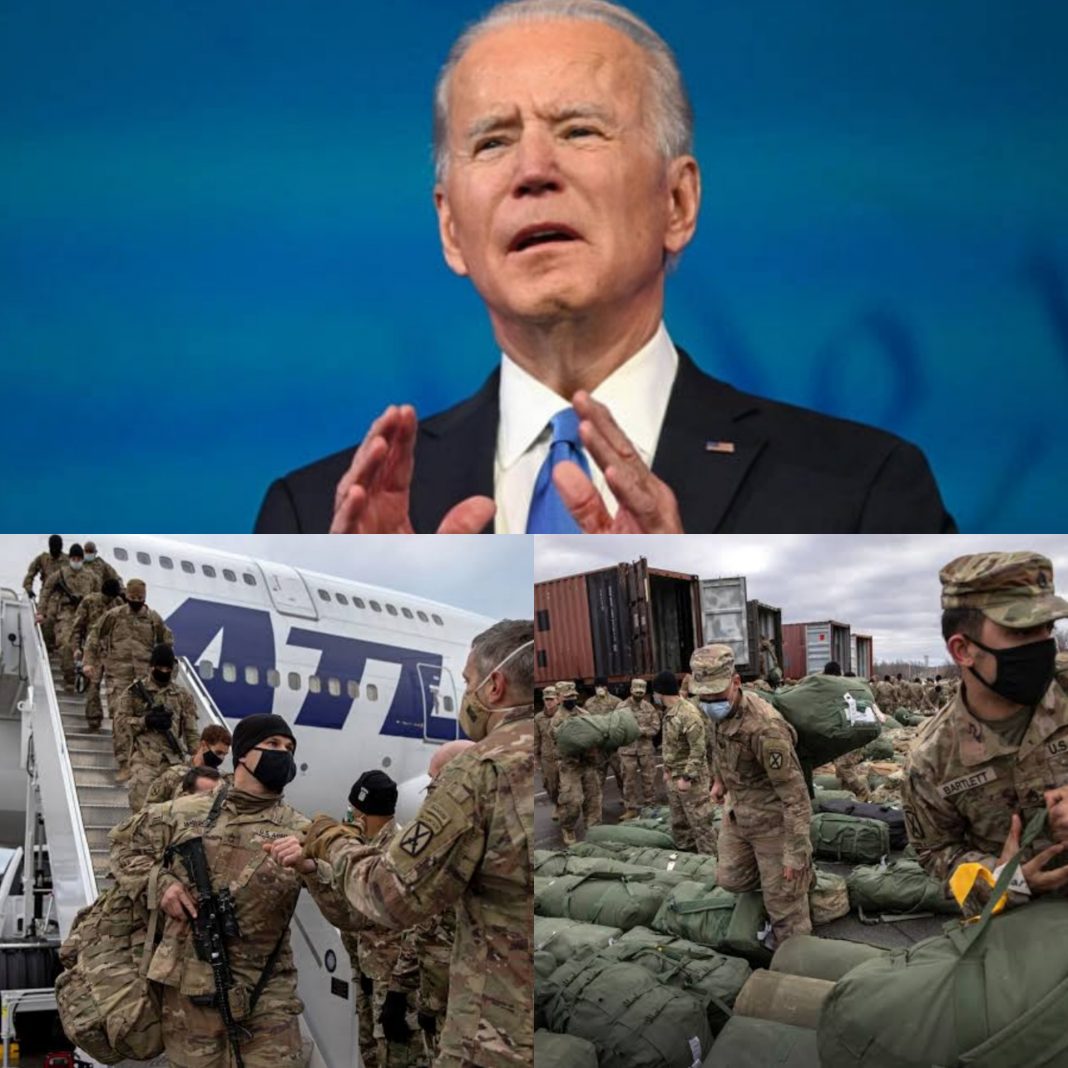 US President Joe Biden defended his decision to pull its troop out of Afghanistan, denying any parallels with the Vietnam War and saying he was confident the Afghan Government could hold off the Taliban with continued help from Washington, 10,000 kilometres away! What a great joke it was. Taliban has shown its ugly head and rising again.

Facing a surprisingly hostile and rambunctious White House press corps on Thursday, Biden argued that US troops shouldn’t stay in Afghanistan because, the Taliban are the strongest they’ve been in 20 years – before backtracking to say that they are still less capable than the US – backed Afghan security forces.

A Taliban takeover of Kabul is “not inevitable,” Biden argued, pointing out the Afghan army has 3,00,000 troops and an Afghan air force (AAF), while the Taliban number 75,000 fighters. But they are very determined to retaliate.

“Do I trust the Taliban? No,” he said at one point, visibly agitated. “But I trust the capacity of the Afghan military, which is better trained, better equipped, and more competent at conducting war.” The so-called safe exit of American forces in Afghanistan was necessitated after the cost of war escalated to an unsustainable levels. According to Brown’s Watson Institute for International and Public Affairs the estimated cost of the war is around US$ 2.26 Trillion & rising with every passing day. The interest overheads due in 2023 on borrowed money will cost the US exchequer US$ 600 Billion. The cost of medical and disability care for veterans of the wars in Iraq is estimated to be around US$ 296 Billion and is projected to be another trillion dollars in the next 40 years.

The two decade old war has left a deep trail of destruction in Afghanistan with estimated 1,00,000 Afghans killed or wounded. The exit was so sudden that all lights were switched off, before the war planes left the base, probably to Qatar, which is just few stone throw distance.

Biden also pushed back on claims the US intelligence community had concluded that the Government in Kabul would collapse, saying that was “not true.” The government has the capacity, the forces and the equipment to fight, but must come together and reach a unity of purpose, he explained.

The US will “not walk away,” he added, implying that Washington will continue to fund the Afghan military, as it has done for years. “No nation has ever unified Afghanistan,” he argued, suggesting that the country might end up partitioned in some fashion between Kabul and the Taliban. US fought against Taliban but funded Pakistan, which in turn supported Taliban and gave moral support. These are the complex equations this conflict produced.

Taliban fighters stormed the capital of Afghan province, taking over police HQ and sparking mass jail breaks in different correction centres. A group of Taliban insurgents briefly took over the capital of Afghanistan’s northwestern Badghis province on Wednesday, continuing the Islamist group’s recent gains in the country amid the withdrawal of US troops.

Taliban Militants stormed the city of Qala-e-Naw on Wednesday morning before being cleared out by the government forces around 4.00 pm local time, the Ministry of Defense said in a Facebook post. Airstrikes were used to push the Taliban back and Afghan National Defense and Security Forces were also deployed to restore order to the city, officials said.

US has left behind their old abandoned armed vehicles and Taliban put the advertisements on the social media to sell America’s vehicles. The US President rejected any comparisons to the collapse of South Vietnam in the year 1975, just three years after the US withdrawal. The Taliban were “not remotely comparable” in capability to the North Vietnamese army, and there won’t be any photos of helicopters leaving the US embassy in panic, he told reporters.

Nor would he accept any US responsibility for what happens next, putting it all on the government in Kabul. As for the Afghan translators or local contractors, who are at risk of reprisals by the Taliban, he said US law doesn’t allow him to bring them over without visas, but they could seek temporary refuge in nearby countries until that process is complete – or US Congress changes the law. Taliban consider these service providers traitors to the nation and these civilians have feared reprisal back home. In the US there is a huge backlog of technocrats who are waiting for H1B Visa to become technology contributors but US will have a special queue for support staff of the US army and pure islamists, who fought on the other side, of course for money and as mercenaries but will be given a red carpet welcome, may be on entrepreneur Visa!

The US has “dramatically accelerated” the timeline for approving ‘special immigrant visas’ (SIV) for the translators and their families, Biden said, announcing that relocation flights will start later this month for those who choose to leave. Some 2,500 visas have already been issued since his inauguration, he added. According to US media, however, there are anywhere from 9,000 to 50,000 total Afghans, counting family members, that might seek sanctuary in the US under this program.

The US went into Afghanistan in October 2001, accusing the Taliban of harbouring Al Qaeda leader Osama Bin Laden, whom Washington blamed for the 9/11 terrorist attacks. Bin Laden was eventually tracked down to a compound in Pakistan and killed in 2011, while Biden was Barack Obama’s vice-president. Biden instinctively denied any association with the “mission accomplished” slogan – referring to the banner President George W. Bush used to boast of a successful Iraq invasion in 2003, which later turned into a quagmire – but then backtracked to say that “the mission was accomplished in that we got Bin Laden and that terrorism is not emanating from there.”

Washington’s choice to withdraw troops from Afghanistan is admission that America’s mission FAILED, says Russian Foreign Minister! But the Taliban is racing fast to control the entire gamut of Afghanistan. They killed 22 Afghan commandos in cold blood. In Kunduz, the terrorist group claimed it shot down two choppers of the Afghanistan Air Force (AAF). Vice President Amrullah Saleh says that the Taliban are guided by the special units of the Pakistan army. He wrote on his Facebook page that the organisation point of view, the Taliban are divided into 3 sections, Taliban has captured key Afghan border crossing into Pakistan which will reduce the earning of the Afghanistan government. Despite spending more than US$ 2.6 TN, the US has failed to achieve its objective. The US troops are leaving behind a nation on the brink of a civil war.

The neighbouring nations are worried. Many Afghan soldiers have took shelter in the bordering Tajikistan. India and China are deliberating on the possible scenario.

Afghan Taliban’s leader Mullah Omar (1960 – 2013) had said in the year 2001, “Allah has promised us victory, and Bush has promised us defeat. We will see which promise is more truth”.
The anger against Ashraf Ghani is rising in Afghanistan. Recently he says, “Taliban should promise, they will not accept Durand line as Afghanistan’s border with Pakistan”. Who cares, what you say. You will soon runaway to USA, whose stooge you are. Zip up and pack your bags, commented an afghan national on twitter. Rumours are floating around that India donated to Kabul arms and ammunitions. The heartbreaking thing is that Iranians allowed their air space for this shipment. Afghanis feel they have a bad neighbours in Iran from where transshipment of arms took place.

Conflicts with Taliban is intensifying, 191 Taliban terrorists were killed and 154 were wounded as a result of afghan forces fightback operations in Paktia, Ghazni, Khost, Kandahar, Heart, Farah, Helmand, Nimruz and Takhar provinces during the last 24 hours. Also IEDs were discovered and defused by Afghan national army.

Where will the boots go? Political analysts feel the US is stepping into yet another theatre of conflict. The US has backed the Philippines against China in the South China Sea. But is the Americas betting on the reluctant partner, who has already asked the Uncle Sam to leave? That’s a trillion dollar question.

Meanwhile the neighbours keep their fingers crossed, what next? As diplomats leave, chancery get closed, consulates reduce manpower and visa sections close. Civilians will suffer.