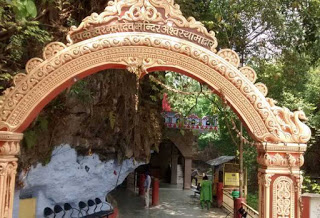 Tapkeshwar Temple in Dehradun, also known as Tapkeshwar Mahadev Temple, is one of the most famous Natural Cave temples dedicated to Lord Shiva. Situated by the forest side, with an inside height of only 6 ft in its formation, the main Shivalinga at the temple is inside a natural cave.

Water drops from the ceiling of the cave trickle down over the Shivalinga in a continuous downpour, making for an interesting spectacle & getting the name of Tapkeshwar. Travellers from and around Uttarakhand pay visit to Tapkeshwar Mahadev temple for its religious significance and adventurers go there to see the water drops dripping on the Shiva ling in Drona cave, which is a spectacular sight. The water that drops down vanishes underground and can be seen few yards away in the form of a stream. In Tapkeshwar Mahadev temple, cool sulphur-water springs where devoted pilgrims take bath before entering the temple.

However apart from the natural beauty & it’s formations, Tapkeshwar derives a special importance known to a few & not often captured in any text books, being the first residence & Taposthali (hermitage) of Guru Dronacharya, The cave is thus named Drona Cave after his name. It was here that Guru Drona & his Wife Kripi did their penance for an almighty son like Shiva & was blessed by the Shiva himself.

Ashwathama (Sanskrit:Aśvatthāmā) or Drauni the Rudravataar was born here in Tapkeshwar caves. He is considered as avatar of one of the eleven Rudras and one of the Eight Chiranjivi Purush. Along with his maternal uncle Kripacharya, Ashvatthama is believed to be a living survivor of the Kurukshetra War. With Ashvatthama means “the sacred voice which relates to that of a horse,It is so called because when he was born he cried like a horse. He was a Chiranjivi. Ashvatthama is born with a gem on his forehead which gives him power over all living beings lower than humans, it protects him from hunger, thirst, and fatigue.

The temple is often visited by Naga Sadhu’s being at the footstep of Himalaya’s & has a tremendous appeal in Dev Bhumi Uttarakhand. Possibly Guru Dronacharya had imparted his son Ashwatthama the knowledge of Celestial Weapons like Bramhashir Astra & Narayan (Vaishanav Astra) here in this cave through severe penance.

No Warrior in Mahabharata held the rank of Mahamarathis.Shiva and Kali are said to be the ultimate Mahamaharathis who held the power of destroying the whole universe in one blink of an eye.

The only person who was capable of becoming a MahaMahaRathi was Aswathhama but there was a condition – he had to be extremely angry and excited to unleash his full potential (which he himself did not knew). Aswathhama had this potential because he descended as an avatar of Rudra, which is Shiva himself.

Only Drona, Bheesma and Krishna knew the true potential of an angry Aswathhama but they never revealed this to anyone. Aswathhama was one of the Chiranjivis and is supposed to live as an immortal, superceeding the “Ichhamrityu” of Bheesma. Vyasa is of the opinion that Shiva was a silent observer of the whole ordeal (in the form of Aswathhama) and would have taken steps to destroy the whole humankind, if Krishna failed to preserve Dharma before Kali Yuga prevailed.

Surya Roy
Previous articleIndia leads the recovery rate ,yet robust vaccination strategy is required to handle the second surge
Next articleBUDGET 2021 – 22 : THE RIGHT ELIXIR FOR A SELF RELIANT INDIA
- Advertisement -