Swasthya Sathi , Dream project of Mamta govt has turned into Nightmare for many pvt hospitals. 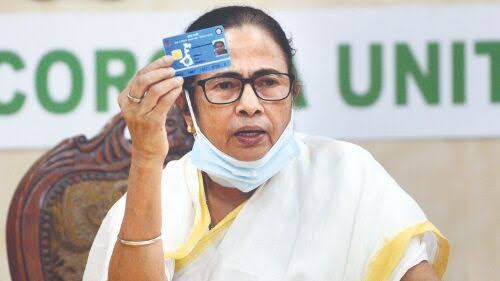 The West Bengal Govt. has recently made the production of the Swasthya Sathi card mandatory for receiving treatment in State Govt run hospitals. If a patient is found not in possession of the instant card, then onus would be on the relevant govt hospital to issue the same to the patient upon admission.
Besides the State Govt run hospitals, there are about 2330 private hospitals and nursing homes, with a total consumer base of about eight and a half crore, covered under this scheme, as per the Business Standard dated October 27, 2021.

As per an estimate by the State Finance Dept., the state spends a whopping  Rs. 8 crore daily, which sums upto around Rs. 250 crores a month to meet the claims of this ‘flagship’ health scheme. However, the scheme seems to have become a thorn in the flesh for the state’s private hospitals and nursing homes. The topmost private hospitals of Kolkata, e.g, The Peerless Hospitals, Medica Superspeciality Hospital and AMRI had voiced their concerns regarding the said scheme, on numerous occasions. Their bones of contention are as follows:

1.      Long waiting periods for receiving payments.
2.      Low treatment packages
3.      A sharp rise in the number of non Covid patients –  a fixed percentage of beds is earmarked for treatment of patients under this scheme in each of the private hospitals, but the same is almost always occupied, primarily by non Covid patients.

Patients cannot be truned down if there is an emergency , which leads to increased pressure on these hospitals.
Rupak Barua, the CEO of MARI Hospitals and the President of the Association of Hospitals of Eastern India had stated during an interview to PTI in September this year that, unless the rates of patient admission to discharge are revised, it will be difficult for hospitals to manage such patients. This is in keeping with the rise in regular operational costs due to the on-going pandemic, specially when the packages offered under the Swasthya Scheme are not financially viable to cover such costs. Mr. Barua had also voiced his concern regarding the realization of outstanding dues from the state government, which was to be around 15-20 days but had gone up to 45-60 days.  According to the officials of these private hospitals, the state govt was already apprised about the above-mentioned issue.

The brunt of this delayed payment for treatment of patients under the Swasthya Sathi Scheme was faced by a relatively new hospital, Sanjiban, situated in Uluberia, Howarh. The hospital which came up in 20212 on a no-loss-no-profit basis , has been treating more than 6,000 Covid-19 patients since the pandemic began in March-April, 2020. It has 150 beds in critical units (CCU), equipeed with life-support devices, which includes ventilators of equal number for treating the Covid patients. According to a news story by The Statesman dated October 24, 2021, the West Bengal govt. is yet to pay a huge amount of outstanding dues to Sanjiban, thus compelling it to move the High Court.  A similar situation is faced by many of the private hospitals of the state covered under the said health scheme, which have stopped admitting patients under the same, claiming non availability of indoor beds. But Sanjiban has not done so, despite facing a huge financial crisis on account of non recipt of its dues from the state govt. The management of the other private hospitals have already raised the issue with the health department, Govt. of West Bengal and at the State Secretariat, Nabanna seeking release of their dues.
Saddled with the burden of dues, now the private hospitals have been slapped with an advisory of fixing an upper ceiling of Rs.5000/- for the diagnosis and clinical investigation of the patients covered under the Swasthya Sathi scheme. The State Government is of the opinion that the private hospitals go for unspecified tests in the name of diagnosis. The State wishes to stop this and bring the patients under the purview of a specific package after spending Rs.5,000/- for clinical diagnosis.
There is no denying the fact that patients from all strata of society prefer to go to private hospitals for treatment because the perception regarding the same is that the treatment, diagnosis and overall service are far superior compared to that provided by the govt. run hospitals. It goes without saying that a little extra needs to be spent for receiving a better service. Hence the patients often do not complain much for the extra bucks spent on private hospitals as long as they receive a treatment for their money’s worth. Hence such diktats on the private hospitals coupled with accumulation of outstanding dues, thus saddling them with a huge financial burden only speak volumes about the non viability of the said Swasthya Sathi Scheme as far as better medical treatment in their preferred hospital is concerned.